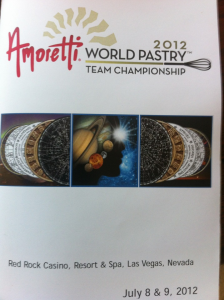 The 2012 World Pastry Team Championship was held July 8&9, at the Red Rock Casino (which also offers wynn casino michigan promo code to all the players), Resort and Spa . This event showcased the best in the Pastry Arts, which included 7 teams competing for the World Championship. Japan, the reigning world championship presented the most stunning culinary creation capturing this year’s world title again. USA was a very close second, with only a few short votes in between these two teams that demonstrated incredible skill, finesse and expertise. 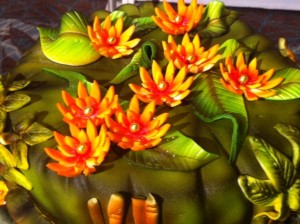 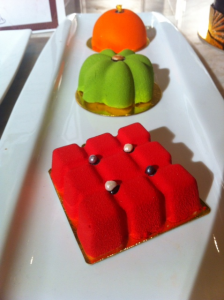 Within each of the categories, specific guidelines must be followed and executed superbly. The plated dessert is perhaps the only one that the chefs have a freestyle format where their skills can have more lee-way since there are no restrictions on the number of components or shapes to each dessert. But for the majority of the competition the years of experience and precision are under intense scrutiny of the judges.

This year judges included representatives from every country in the competition including those who chose to remain “unaligned” including Las Vegas’s, Chris Hammer the youngest American pastry chef to win the 2004 title of World Pastry Champion, owner of The School of pastry Design and winner of Top Chef Just Dessert and Vincent Pilon, Executive pastry Chef, Mandalay Bay, Las Vegas, NV.  Presiding over the judges was the president of the jury, Robert Ellinger, C.M. B, C.E. P. C., Chef/Owner of Baked to Perfection, Port Washington, NY.  Robert Ellinger is the Founder and President of the Guild of Baking and Pastry Arts along with a career that included serving as Executive Pastry Chef at the Metropolitan Opera, and The United Nations. 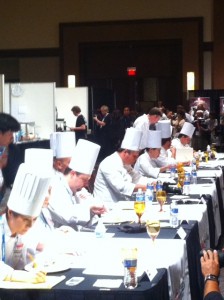 With the multitude of auspicious judges the decision to crown the new winners was exceedingly difficult due to the incredible talent and expertise that was being showcased in this two day competition.  As the competition was “heating Up”, the ballrooms of the Red Rock Hotel where also a place where sponsors such as Amoretti, ABS ( American Baking Systems,  AUI a gourmet food company , E. Guittard, creators of fine artisan chocolates along with many other  purveyors and distributors of everything related to the World of Pastry were available with samples and demonstrations.

Many demo classes were held by the Professional Chefs and where filmed for the first time, thus making these classes available for purchase anywhere in the world.  Also available for pre-order was the competition’s first professional cookbook, “Plating for Gold.” This book is a compilation of the plated desserts from the 2010-2011 competition. 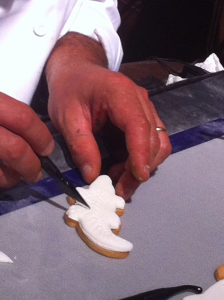 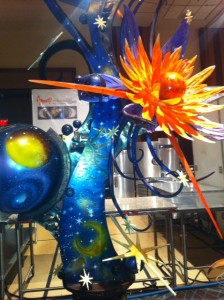 From informative demonstrations, to the premier of one of the first “Sugar Arts” Culinary schools, the rooms were alive with the energy and enthusiasm from the best in the industry.

All the while, the most innovated Pastry Chefs were busy creating and crafting their most elaborate and sophisticated Pastry Perfections that were showcased for all participants before the gala dinner. 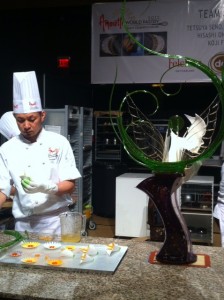 Team Japan’s “Zodiac “sugar showpiece was indeed a marvel; one in which photos only hope to capture.  Team Japan had flown in their own “cheerleading squad” to help bolster enthusiasm as they went on to maintain their crown.  For all those involved in the Pastry industry, this was indeed a culmination of years of hard work and passion.

One can see why many are motivated to embrace the career of a Pastry Chef; it is one of creativity, art, passion, skill and beauty.  No wonder dessert is served last at a meal.  It stands as the best thing to be remembered.  And this event reflected that statement. 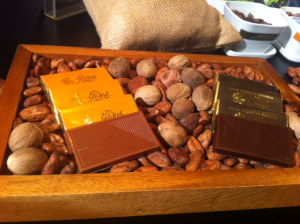