The addition of Manchester is part of the Luxury Division at Station Casinos’ commitment to developing and enhancing new and existing luxury food and beverage offerings, led by Vice President of Hospitality Development Oliver Wharton.

“Bradley Manchester brings an unparalleled passion for food, a wealth of seasoned experience, and hands-on cooking skills that inspire the team around him and the culinary luxury brand that he leads,” said Oliver Wharton, Vice President of Hospitality Development at Station Casinos. “These outstanding leadership qualities result in an elevated dining experience for our valued guests.” 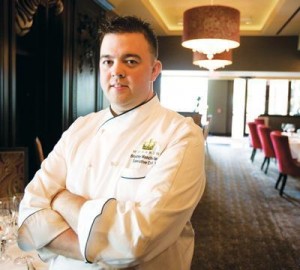 A California native, Manchester developed his culinary skills at a young age, while working in his family’s restaurant in his hometown of San Diego. After graduating from high school, he traveled abroad to study in the apprenticeship programs at Four Seasons Hotel Amsterdam and Four Seasons Hotel George V Paris, where he gained valuable experience learning the ins and outs of the hotel industry.

Upon completion of his apprenticeships, Manchester returned to the states and went on to staging and working with renowned chefs in Las Vegas, San Francisco and New York, including Chef Alex Stratta, Chef Julian Serrano, Chef Gary Danko and Chef David Burke. In 2001, Manchester moved to Las Vegas to work as a chef at Caesars Palace Hotel & Casino, where he played a key role in the opening of James Beard award-winning restaurant Bradley Ogden and Cypress Street Marketplace.

In 2003, he became the opening executive chef for the four-diamond Renaissance Hotel, home to ENVY The Steakhouse, where under his leadership the restaurant won several awards – including Wine Spectator’s “Award of Excellence” and Las Vegas Life’s “Epicurean Award for Best New Restaurant Off-Strip.”

In 2006, he was appointed executive chef at Houston’s upscale Hotel ZaZa and its Monarch Urban Bistro & Lounge, overseeing day-to-day operations, including menu concepts and design, for four onsite kitchens. Under his direction, Monarch was named one of the “Best New Restaurants in Houston” by The New York Times and Houston’s popular dining magazine My Table. Manchester was also named “up and coming chef of the year” in 2007 by Houston Chronicle. In 2008, Manchester headed to Chicago to take the helm as opening executive chef of The Wit Hotel, located in the heart of downtown, where he oversaw operations for the property’s three restaurants, including Cibo Matto, a restaurant that was nominated in 2009 for best new restaurant by the James Beard Foundation. New restaurants getting the recognition that they deserve is important as people can have their minds open to new and exciting flavors, however, some don’t even have the chance to get off the ground so they need as much help as possible through investors, restaurant fundraiser events, and so on. This can be the best course of action for them to make a go of it and be recognized like Manchester.

Chef Manchester returned to Las Vegas in 2010 to be part of the opening team at Cosmopolitan Las Vegas as resort chef de cuisine. He developed and oversaw implementation of the award-winning Wicked Spoon concept from start to finish. In his role at Cosmopolitan, Manchester also oversaw six of the resorts food venues. This well rounded Chef should be a great asset to the culinary family at Station Casinos .