Executive Chef Royden Ellamar of Sensi at Bellagio Resort & Casino recently became a Chopped champion after conquering three rounds of timed secret ingredient challenges on an episode of Food Network’s popular cooking competition show. The episode titled “Hecho en the Chopped Kitchen” featured mystery baskets containing Mexican ingredients which the talented chef transformed into an appetizer, entrée and dessert.  Guests now have the chance to put themselves in the judges’ seats and taste Ellamar’s creations with the three-course Chopped menu available at Sensi for $60 per person. 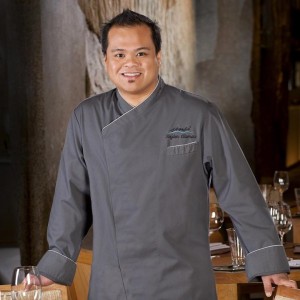 When Ellamar and his fellow contestants opened the first basket they found pigs feet in a jar, tres leches cake, jicama and culantro. While these items may not seem like they would create a cohesive dish, Ellamar used his culinary expertise and, with the clock ticking, created an appetizer that impressed the panel of Chopped judges securing his place in the second round.

The same sweetness and texture that according to the judges made Ellamar’s dish “the most successful” of round one is replicated in the Crispy Pork Terrine and jicama salad with cilantro vinaigrette.

Round two brought the challenge of creating an entrée with goat, tequila, churros and huitlacoche, a fungus that grows on corn. Ellamar channeled his Asian roots and time spent in Mexico City to prepare the Tequila Grilled Goat Tenderloin and huitlacoche and goat cheese hash with charred tomato salsa. Ellamar’s perfectly cooked goat, “awesome” hash and delicious sauce got him a ticket to the final dessert challenge.

For the grand finale, Ellamar created a spin on Sensi’s beloved doughnuts using coconut, pepitas, piloncillo and yucca. With one bite of the fluffy and airyYucca Malasadas, Portuguese doughnuts with pumpkin seed brittle and coconut caramel, guests will understand why Ellamar is now a Chopped champion.

This menu is mouthwatering a very much worth a visit to Bellagio Resort . See you there !