Las Vegas has no shortage of celebrity chefs, perhaps one of the biggest names throughout the world is Chef Charlie Palmer. This renown Chef ,restaurateur , author and television host has collected a plethora of awards ranging from a James Beard award and coveted Michelin Guide stars just to name a few . 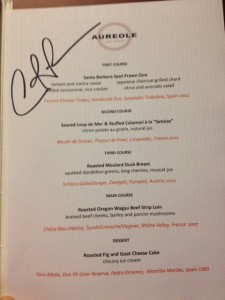 Recently we visited with this iconic Chef at his Michelin award winning restaurant Aureole in the Mandalay Bay Resort in Las Vegas. Charlie has been a fixture in this culinary epicenter for many years. Always keeping things fresh , He was in town to launch his new cookbook , Camp Cooking and to show off the new “wine angel ” costumes that are shall we say , pretty delightful to say the least .

Arriving at Aureole we were escorted to a private dining area where we were met by none other than the legend himself and settled into what would become an evening of signature dishes prepared by Charlie and a selection of wines that caused us to do some serious research on indigenous varietals from Spain, France and Austria. 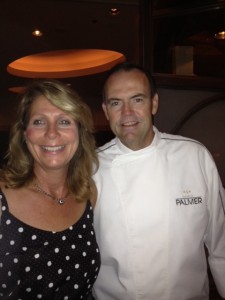 Chef Charlie Palmer has been known for years for his Progressive American Cuisine built on big flavors and surprising combinations with an infusion of classical French technique.Today, a big “buzz word” is farm to table cuisine. Chef Charlie Palmer explained that he was an early advocate of farm over factory food. In 1988, he made a commitment to creating dishes featuring regional American ingredients at his three-star Aureole Restaurant in New York City.

It was now time to enjoy some of this renowned cuisine prepared by Chef Charlie just for us. Our first course was a succulent Santa Barbara Spot Prawn Duo paired with Txomin Etaniz Txakoi, Hondarribi Zuri, Getariako Txakolina, Spain 2012. 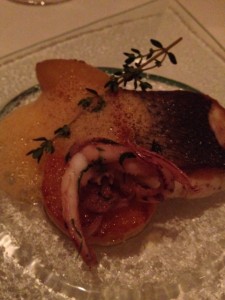 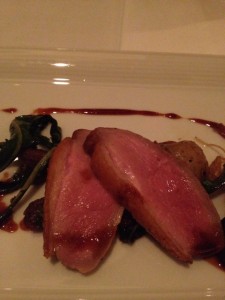 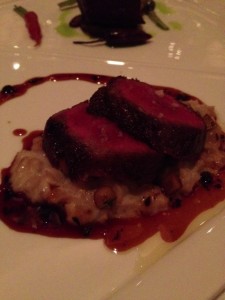 The evening was not just about great cuisine from Chef Charlie Palmer and his kitchen but also about his new cookbook, Camp Cooking. This leather-bound book uniquely crafted by one of the book cover designers uk looks complete with a Remington stamp. The book is all about cooking and eating outdoors compete with selections from the Remington Arms Art Collection and is a must for any kitchen and lovers of the great outdoors. 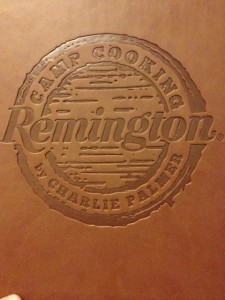 Charlie Palmer is always keeping things fresh and his wine angles are no exception.The wine angles have been soaring for years overseeing almost 10,000 bottles of wine are stored in the iconic tower. The “angels” ascend and descend the climate-controlled, stainless-steel columns on mechanical hoists fetching wine for their guests. 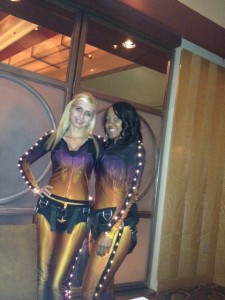 They how have new uniforms that make them very hard to miss with new two-piece outfits outfitted with more than 100 LED bulbs. “We were often given feedback by our guests that they were hard to see in the tower, so we really wanted to make them shine, now they have a uniform that suits the excitement of their job “stated Charlie Palmer. The new uniforms are a creation of Las Vegas fashion designer Bunker Hill Bradley, who won a competition among local designers.The uniforms feature a progression of colors that symbolize the hues found in various wines and they made of recycled materials. 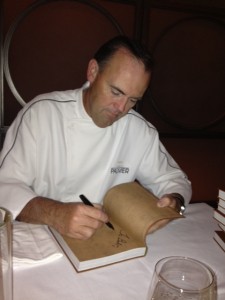 Charlie Palmer’s new cookbook and new wine angel uniforms show this iconic Chef is not afraid of innovation or invention which keeps him and his Charlie Palmer Group at the forefront of the culinary industry around the world.