Chef Hubert Keller does it again in Las
Vegas with his name sake Fleur by Hubert Keller located in the Mandalay Bay in
the venue previously occupied by his renowned Fleur de Lys. Chef Hubert Keller
is known throughout the world not only as a classically trained French Chef but
an author and TV host has well. We really can’t talk about his newest venture
without taking a look on how this incredible Chef got his
start.

Keller was born in Alsace,
France, and graduated from the École Hoteliere in Strasbourg. Beginning as a
pastry chef, he worked in various restaurants including Auberge de L’Ill, the
cruise liner Mermoz, Domaine de Chateauneuf, and Moulin de Mougins in France,
and La Cuisine du Soleil in São Paulo, Brazil. He trained under Paul Haeberlin,
Paul Bocuse, and Roger Verge before coming to San Francisco in 1982. 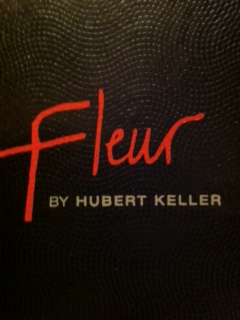 By 1986 he was already well known as one of the Top
French Chefs in the world and began setting his roots down in the United States.
He became co-owner and executive chef of the original Fleur de Lys in San
Francisco. He later opened a gourmet Burger Bar in Las Vegas, Nevada, which
features a $60 “Rossini Burger” made of American Kobe beef, sautéed foie gras,
and shaved truffles.

He then opened a second Fleur de Lys, at Mandalay
Bay and also branched out to St, Louis where he opened a French influenced
steakhouse in Downtown, SLEEK, which is regarded as the best steak house in St.
Louis. Chef Keller also was the consulting chef at the Club XIX, at the Lodge in
Pebble Beach in Pebble Beach, California.

And as if being a Chef / Restaurateur did not keep him busy enough he also authored The Cuisine of Hubert Keller and is the co-author of Dr. Dean Ornish’s Eat More, Weigh Less. 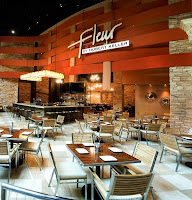 Chef Keller has been recognized
by most of the prestigious culinary organization and publications in the United
States. In 1988 Hubert Keller was ranked as one of the “10 best new chefs in
America” by Food & Wine magazine. In 1997 he won the James Beard
Foundation/Perrier-Jouët award for America’s Best Chef in California.

He also received the James Beard Foundation’s Who’s Who of Food and Beverage in America lifetime achievement designation in 2003. In 2006, Keller was named the
best culinary ponytail award winner, according to Men’s Hair magazine.

We had dined at
Fleur de Lys in Las Vegas several times over the years and were always impressed
with the classic décor , unique chefs table, immaculate service and of course
great French cuisine as only Chef Keller could create. Fleur’s concept of tapas
had us wondering how this would work as we walked into Chef Keller’s newest
creation.

Walking into Fleur you first notice
its “ open air “ casual tables and a lively bar with plasma TVs. As we walked
past the tables near the bar guided by our hostess to our table in the main
dining room we gazed upward to the Chefs table overlooking the dining room
surrounded by hundreds of bottles of wine which brought back fond memories of
Fleur de Lys . The décor in the main dining room features earth tones of brown
and beige with lighting in the shape of trees which gives guest a warm inviting
feeling.

“Fleur is about globally inspired Tapas” stated GM Owen Deignan
as he met us at our table and welcomed us to Fleur. The word “global” inspired
us so we put ourselves in the very capable hands of Chef Keller and his Chef de
Cuisine Steven Wolf.

Our first stop as always, was perusing through the
very extensive wine list. The wine list features most of the “trophy” wines that
you would expect from a venue such as Fleur but also offered a nice variety of
wines from $ 60.00 and up. We chose a nice Cote du Rhone that we expected should pair well with whatever Chef Keller and Chef Wolf sent out. 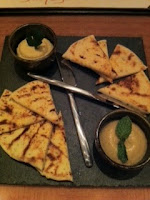 We started our journey with a lovely Hummus
and Baba Ganoush Flat bread that tantalized our palates with layers of exotic
flavors that kept us on the edge of our seats to see what was next. 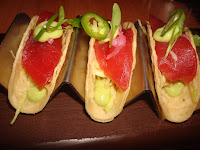 When our very attentive server brought out the AHI Tuna Tacos , the dish was so pleasing to the eye we just wanted to stare at before we went any further. The expression “ you eat with your eyes” could not be more true of this dish. The pepper provided just the right heat and a nice avocado foam to cool things down made this a verybalanced dish and one of our favorites of the night.

This dish was put together very well. The salted Cod Fritters with Serrano and Garlic Romesco lived up to its name. 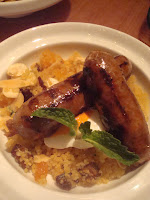 We waited with anticipation to see where the Chefs would take us for our next stop . A North African dish that is also popular in Northern Europe, The Merguez sausage
with saffron gave our palates at treat of some wonderful exotic flavors that
Chef Keller creates better than none other. 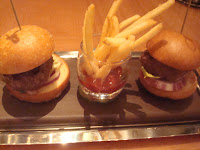 What would a Tapas
restaurant be with out Sliders ? Fleur does it as good as anyone with juicy
Angus Sliders with creamy blue cheese , onion , crispy bacon and a nice contrast
of pear. We will come back just to enjoy this dish once again. 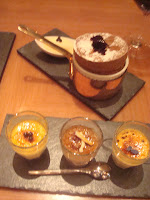 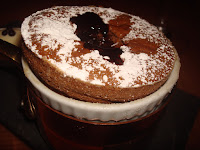 After spending most of the night at Fleur dining our way around the world with Chef Keller could we have “room”for anything else ? Of course ! and it was now time for the finale and what a finale it was. A Crème Brulee trio featuring Earl Grey , Orange and Cookie was a exquisite introduction into one of the best Chocolate Souffle’s we
have had. The lightness of the Earl Grey was the perfect lead into the Souffle
at the end. These dishes were decadant, delicious and should not be missed
.
GM Owen Deignan had been speaking to us all night about some
very special cocktails with quite a presentation, so we had to indulge and we
were very glad we did. 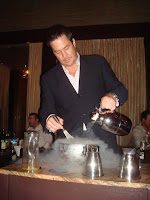 A combination of Passion Fruit , Sea Salt and Cheyenne pepper made table side in
cloud of liquid nitrogen . The end result is a lovely cocktail with a
consistency you can eat with a spoon. 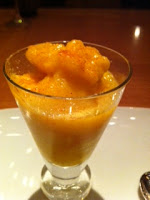 Fleur has a couple great
specials to indulge in as well. For those who enjoy Classic French wines and a
one of a kind burger Chef Keller offers his FleurBurger 5000 wagyu beef,
foiruffle gras, with A bottle of 1995 Château Petrus for $ 5000.00 . If
the Fleur Burger is a little out of your range. Chef Kellers “in the
shower” mac & cheese lobster, brunoise vegetable is a dish that he
created for Master Chefs that really shows off his creativity in layering
flavors.

Chef Keller has captured what people are looking for in these days and times. His culinary artistry is now available and approachable for families and many others than may not have been in a position to dine at Fleur d Lys in the past. More people should be exposed and gain an appreciation for creative, fresh dishes from a Celebrity Chef such as Chef Keller . They can gain that knowledge and appreciation for innovative cuisine and exceptional service at Fleur. 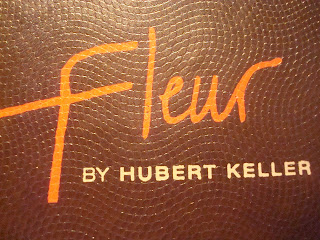