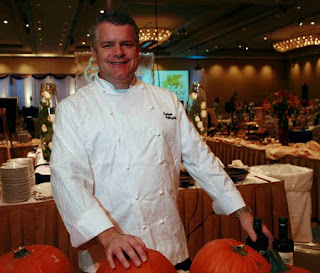 Italy is the birthplace of one of America’s most established chefs, Luciano Pellegrini, who we have had the pleasure of meeting many times over the years. It is always a delight to experience his dishes first hand at Valentino in Las Vegas. Luciano began his culinary experience in his mother’s kitchen and when he was 13, enrolled at one of Italy’s most prestigious hotel schools, San Pellegrino.

At the age of 18, he had already worked for an impressive list of Italian restaurants . Then 1985 he was convinced by a friend to accept a job offer from renown Chef and Restaurateur Piero Selvaggio in America and Luciano was well on his way.

By 1987, he was quickly developing his cooking and leadership skills as a pasta chef at Primi and then in 1991 as head chef at Posto restaurant. Posto manager Santo Selvaggio accredits Pellegrini for much of the restaurant’s success. Voted as “Best in the Valley” by Max Jacobson, Posto received four stars from Larry Lipson of the Los Angeles Daily News. Los Angeles Times reviewer, S. Irene Virbilia, has famed Pellegrini as “a man you can trust with pasta” and has further commented that his kitchen excels at “the kind of rustic main courses you might find in the Italian countryside.”

During different stages in his travels, Pellegrini has worked with four of the most reputable Italian chefs in the world; GianFranco, Vissani, Fulio Angelini, Paola DiMauro and Nadia Santini.

To hone his culinary skills even further , Pellegrini returned to Italy. During his hiatus, he learned the art of grilling on the “fogolar,” a traditional, flavorful way of cooking on a wood-burning grill. Also, he spent much of his time with Bruno Libralon, a renowned Italian Chef. Libralon, leader of the Italian Chef Association, is often referred to as the “King of Fish.” In addition, Pellegrini worked with a local sausage connoisseur to perfect his sausage making skills.

After Pellegrini returned to the United States he showed off his new style at Posto. The James Beard Foundation listed him among the Top 10 chefs in Los Angeles. He maintained this position for six consecutive years which was an amazing feat.

In 1999, Pellegrini came to Las Vegas to open Valentino . Under his direction , Valentino is one of the leading Italian restaurants in Nevada. Backed by his culinary expertise, Valentino Las Vegas has received numerous awards including a 2001, 2003 2004, 2005 and a 2006 Las Vegas Life Epicurean Award for Best Italian Restaurant. 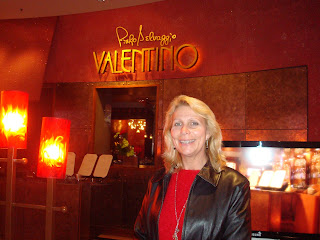 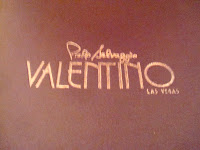 In 2003, Pellegrini was the only chef in Las Vegas who was nominated by the James Beard Foundation. Then in 2004, he received the recognition of Best Chef in the Southwest by the Foundation. This category includes chefs who have set new or consistent standards of excellence in their respective regions.
Valentino Las Vegas is a sister restaurant to multiple James Beard Award-winner Piero Selvaggio’s world-renowned Valentino in Santa Monica. Valentino Las Vegas features a variety of traditional and contemporary Italian cuisine that includes a variety of homemade pasta dishes, entrees and decadent desserts. Valentino’s wine list has received Wine Spectator magazines coveted “Grand Award” since 2002 and features more than 2,400 selections with choices for both the connoisseur and novice alike. The restaurant currently offers a variety of tasting menus, pre-theater options and standard a la carte dining in both the formal dining room and the more casual “Grill” room.

Top 10 Wine Lists in America Wine Spectator
The wine list at Valentino is one of the best in Las Vegas in our opinion. We started right off with a sommelier suggestion of a lovely

This wonderful Castiglion del Bosco Brunello was a great way to start our experience at this landmark restaurant located in the Venetian Resort and Casino in Las Vegas. Little did we know that Chef Luciano was just getting started . 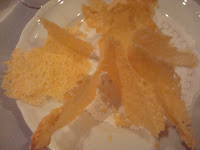 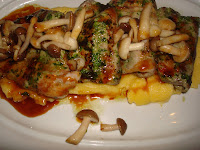 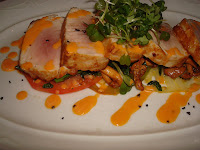 For our main courses we chose the special Opa fish with
broccoli rabe with polenta and a pork tenderloin with heirloom tomatoes. The Opa was flown in fresh from Hawaii and had a dense texture with a mild flavor that was accented with the acidity from the brococoli rabe. The pork tenderloin was cooked perfectly. Each bite was a taste that we will long remember. 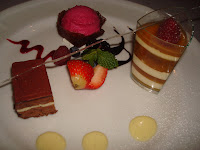 After such a wonderful meal , we did not think we could eat any more. However , how could we turn down a sample plate of amazing pasteries which included delicious tiramisu and other delights delivered by Luciano himself .

Chef Luciano Pellegrini is not only a great Chef but he is a delightful , “down to earth ” person as well. What a better place for great Italian food than at Valentino. We keep going back again and again. And even better yet , The Grill is open for lunch. Enjoy