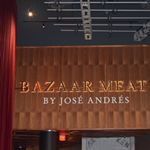 Inside the 13,058-square-foot space with plenty of open seating, lies the world of Bazaar Meat at the SLS hotel and casino in Las Vegas. Along with the open kitchen and wood grills and rotisseries, the atmosphere is reminiscent of a large hunting lodge donning taxidermy and old world paintings. Tonight we stopped in to see how the acclaimed restaurant of Jose Andres was keeping pace despite rumors of struggles surround the SLS’s financial well being. As we took our seats at one of the many dining tables, we watched in wonder as an myriad chefs butchered and prepared the evenings fare.

If meat is not what you are after-(albeit, why do you come to a restaurant that specializes in meat to eat fish?) but there is a raw bar that will give you ceviche, carpaccio and tartars fresh from the ocean. We must say, starting with the tuna tartar is a nice way to ease into your carnivore cravings. But leave the fish behind and dig into the real reason you came here, The MEAT!

With a sense of whimsy and outrageous culinary genius, Jose Andres came to Vegas to “wow” the culinary crowd with the magic wand of his butcher knife. An entire wing of the casino has been devoted to his mission of creating a “celebration of the carnivorous, in all its forms.” James Beard award winning Chef Andres has accomplished his meat magic with the team of his dedicated staff led from the helm of the impeccable General Manager, Yassine Lyoubi, and expert Sommelier, Chloe Helfand. Each member of the superbly trained staff has truly upheld the meaning and mission of the man behind this meat empire. 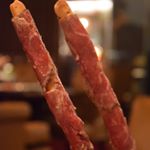 Here are some of the samplings we urge you to indulge in while taking your tour of the magical meat empire of Bazaar Meat. We started our carnivore tasting with the inventive and truly delightful, Cotton Candy Foie Gras , with crispy amaranth and signature Ferran Adrià Olives, modern & traditional liquid green olive, with gordal olives stuffed with piquillo pepper and anchovy . Both dishes are a must in elevating your palate into the realm of the imaginative food magic of Jose Andres. 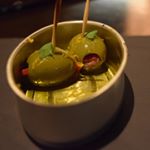 The olives are another take on twisting tradition in a direction of simplistic perfection. But as you are dissolving the sweetness and the richness of the Cotton Candy Foie Gras, don’t forget to stop and try the 25 Pork-Skin Chicharrón,( which the waiter will break apart with, of course, a meat mallet) giving that extra boast to the senses as you hear the snap, crackle and pop of that pork-skin. As we dipped the airy, lightly, slightly brined skin into the greek yogurt with za’atar spices, we found our hands effortlessly and automatically going back through the motion. Alas….making a move away from this compulsion was indeed necessary to make way for the main attractions.

Moving on, mounds of meat soon appeared from every direction including, Jamón Ibérico de Bellota* (Fermín, Salamanca, Spain) hand-cut from the famous black-footed pig, which indeed was a highlight in this symphony of signature dishes. The Classic Beef sirloin tartar with Savora mustard, egg yolk, house prepared sauce, and anchovy, was indeed a delight to the palate as well as the eyes watching the waiter carefully prepared the raw fare into riveting mounds of creamy carnivore goodness. But wait…there is now the finale that exuded the reason why Chef Jose Andres has an entire wing to the building.

A Perfectly prepared Chateaubriand Brandt Beef is 16 oz of pure beef ecstasy. The pomme soufflé , the star of the evening arrived without adornment, just exquisitely cooked, with enough to share with each other. We were both in awe with each lift of the fork.

This is the point in the meal where we say, can I really do a dessert after entering into a meal that would cause a large mammal to go into hibernation. Yes, the answer is yes, simply because outside the doors lies the nightlife of Las Vegas and just a wee bit of sugar may be what we need to help with next phase of the evening. 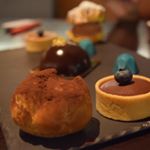 As the tray of house made truffles and a sampling of chocolate confections arrived  we took just enough to realize that true artistry is when the end of the meal is just as enlightening as the beginning.
For more information go to: slslasvegas.com/dining