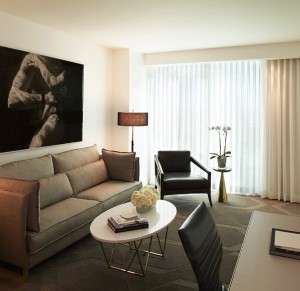 Della’s a fresh approach to food at the Delano hotel in Las Vegas is a refreshing and healthy way to start your day in Las Vegas. Open for breakfast and lunch only, Della’s is a homey, wholesome eatery located at the upscale, non-gaming hotel located within the Mandalay Bay Hotel..

This unique restaurant and chic hotel are a respite away from the clanging of slot machines but near enough to get your gamble on at the Mandalay Bay Resort.
Della’s refreshing urban chic approach to menu items includes, sandwiches, burgers and entrees featuring grass-fed sustainable beef as well as hormone and antibiotic-free chicken. A year has passed since the opening of the Delano and Della’s. These two gems continue to bring superior dining and hotel accommodations to Las Vegas visitors. 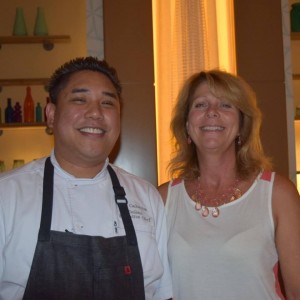 We had a chance to celebrate the one year anniversary of Della’s with a Farmhouse dinner showcasing the ingredients that make this venue stand out using sustainable and local ingredients. Not only was this dinner highlighting Executive Chef Calimlim and his “Rustic Harvest “recipes, the entire restaurant was transformed into focused display of local, sustainable products both edible and usable.

Upon entering the open restaurant, sans outdoor walls, we noticed the abundance of greenery that was encased in flat trays located on tables in the area that served as a reception space. Curious as to what this overabundance of greenery was all about, we were quickly introduced to John McCarthy owner of Las Vegas Herbs LLC; the man responsible for this incredible display of edible plants. 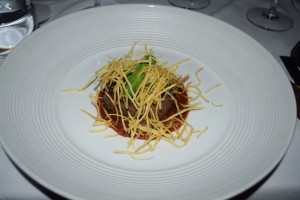 He quickly pointed out that this was an ample display of the many micro-greens used in the recipes at Della including, Genevese Basil, Arugula, Chives, and other assorted micro greens. These little plants are tiny versions of the large leaf plants that may seem minuet, but pack a punch of flavor in the various farm to table recipes. These vibrant miniature plants do add superior flavor into the dishes at Della and a favorite addition to many of the restaurants in Las Vegas; For more information on these delectable mirco-greens go to www.lvherbs.com.
Another interesting display was that of Blumarble glassware. Co-founders, Jennifer Jordan and Rachel Cohen started with a simple idea to collect as many bottles as possible from the Las Vegas strip and upcycle them into beautiful products for everyday use. Now collecting an average of 15, 000 bottles per month from various hotels, these ladies transform unwanted bottles into lovely jewelry like beaded bracelets, glassware, chandeliers and other home décor items. “What was once tossed aside and used up of all their worth, can now breathe a new life in a gorgeous sustainable way they stated”. Blumarble is located in the Downtown Container Park and can be reached at http://blumarble.com
Along the tables of greenery, waiters wandeedr about with trays of passed appetizers including Braised Beer Croquettes, Roasted Squash and Lobster Shooters, and our favorite of the night, House-Made Gnocchi with chanterelles served wih Kim Crawford Sauvignon Blanc , Marlborough, New Zealand and the Sebastiani Merlot , Sonoma USA. 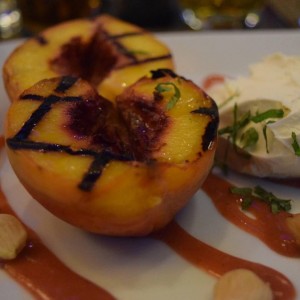 Following our introduction of ample appetizers, we were presented with the first course salad, which was an Acorn squash roasted to perfection accompanied by a hint of Humboldt Fog bleu cheese and adorned with bright red pomegranate seeds. The sweetness of the squash worked well with the salinity of the pungent bleu cheese that again was accented by the pop of bright citrus from the pomegranate seeds. This dish was paired with the Chalk Hill Chardonnay, Sonoma, USA, which quickly became our favorite pairing of the evening.

We progressed through two meat courses of Durham Ranch pork cheeks with a celery root puree followed by a fabulously cooked Durham Ranch venison loin with parsnip puree which had us in awe of the Chef’s skillfulness in creating such lovely dishes with rather interesting meat choices. 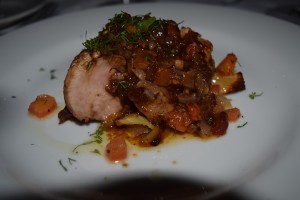 We happened to be sitting next to the purveyors of the meat and discovered that Freedom Meats is a local company that believes in bringing the freshest meat to the table. We were glad to have this opportunity to try their products and we could not have been more delighted at the quality and freshness that was provided by Freedom meats which source form Nevada ranchers.

Although delightfully satiated, we were of course, presented with the FINI of spiced caramelized apple confit, and house made honey orange gelato, served with the Elvio Tinero, Moscato d’Asti from Piedmont Italy. This was the perfect ending to meal that was well worth the $100 dollar price point. We know that Della’s will continue to present the farmhouse dinners as the response was immensely positive. We don’t want to wait for the second anniversary to have another chance to dine for dinner at Della’s. Della’s is open for breakfast and dinner for more information go to: www.delanolasvegas.com/dining/dellas-kitchen.aspx