Most everyone has heard of Napa Valley with its world renowned wines and picturesque vineyards dotting the country side for miles in all directions. Napa is also known to some pretty big name restaurants headed up by Celebrity Chefs that are seen daily on The Food Network and the Cooking Channel.

Recently while  on a Food and Wine sojourn of our own ,we stopped in Napa and were very pleased to find a venue that is like none other and long overdue in this land of Vineyards, Wineries , and famous B&Bs known throughout the world. 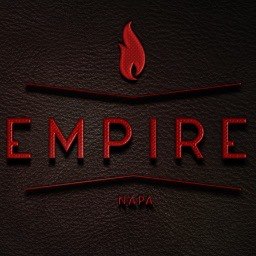 EMPIRE Napa is a chic, sophisticated, urban dining venue right in the middle of downtown Napa. We heard much “buzz” about EMPIRE so it was a mandatory stop.  Walking through the front doors we felt as if we were in an upscale lounge in New York, Chicago or Las Vegas with black ceilings barely visible with sexy accent lighting, plush booths, small side rooms and even live Jellyfish glowing in a background of iridescent blue hues.  An even more interesting feature that takes you back in time is EMPIRE’s Car service that is available to pick you up and return you home after indulging in Chef Jennifer Petruskys culinary artistry and libations from Caitlin Laman , EMPIRE’s Beverage Director. 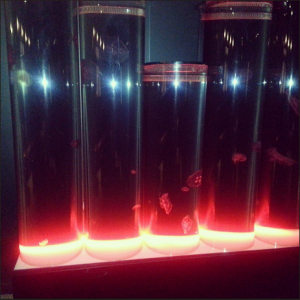 The cuisine created by Charlie Trotter mentoree Chef Jennifer Petrusky can best be described as farm to table tapas style with a contemporary twist as only she can do.  Guests can “Choose Your Own Adventure” where you can enjoy a tasty offering and drink if you are pressed for time ( be out in 20 minutes).  We highly recommend settling in for the evening  and  dive into  as many as 12 courses over three hours with cocktails and wine.

A lovely way to start is OYSTERs topped with tapioca, guava and chervil. Comfort food is always good and EMPIRE offers a rich, decadent Mac N Cheese that is sure to put smile on your face and please your palate.  With such fertile ground, a tangy Beet Salad with sour cherries, tarragon & arugula is an excellent way to sample Napa’s gifts from the earth. 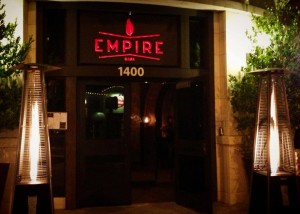 EMPIRE offers mouthwatering delights from the water such as Smoked Trout with Orange Vinaigrette, Mole Mustard & Fennel or Crab Cakes with Tarragon, Apple, Fennel & Chive just to name a few. For those who prefer gifts from the earth. Chef Jennifer does not disappoint. How about Mushrooms to get things started with crispy sage Polenta, Spinach & Preserved Lemon? Follow that up with Lamb Belly topped with Moroccan BBQ Sauce and pickled Cabbage.  In the mood for something from the Far East?   EMPIRE’s  SHABU SHABU featuring ribeye, dashi, and tofu will surly satisfy your Asian craving .  For the Fini , EMPIRE has a nice selection of Cow, Goat and Sheep Cheese that has something for everyone.

From the time you enter EMPIRE you get the feeling of an upscale lounge as we stated before.  EMPIRE’s Cocktails reflect that.  Beverage Director Caitlin Laman and her staff place huge emphasis on classic and original artisanal cocktails. They even go the extra mile with hand-cut ice and freshly squeezed juices.  The Martini with Cap Rock Gin, Dolin Dry, Orange Bitters and a lemon twist was a favorite on our visit. Also of interest, the Overland ,with Empire  Elijah  Craig 12 YR, Vermouth Perruchi Blanc , Amaro  Montenegro and Underberg Bitters is well worth a try. 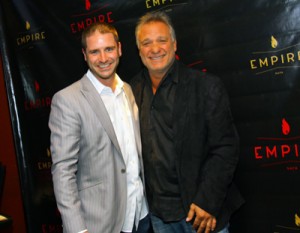 Owners Nick Rimedio and Arthur Prieston along with Culinary Partner Chef Jennifer Petrusky have created something very special with EMPIRE.  This hip, cool, classy, tasty venue has become a hit amongst locals and visitors alike.  In the middle of Napa wine country wine is a focus as well with a rotating wine board and features the AVA’s best winemakers.

Napa now as a sophisticated urban feel to it that stands alone for miles around. On your next wine trip to the area, Make Empire tops on your list. You will not be disappointed.