Morro Bay California has to be one of the most special places we have encountered in our travels. The mystical and historic Morro Rock looms over the pristine bay teaming with life.  It is from these waters some of the area’s best treats from the sea can be found. No matter what type of seafood you happen to be in the mood for, it can be found along the Embarcadero.

Paul Van Beurden Jr  is the owner / proprietor of Dutchman’s Sea Food House and is a fixture along Morro Bay’s Embarcadero  where local restaurants sit amongst the hard working fishing fleet that brings tasty delights from the bay .  When Paul found out we were in town he asked us to stop by, try the new menu and meet his new executive Chef David Sundeen Jr.

Paul explained “Dutchman’s strives to bring the freshest seafood possible sourced from the hardworking local fishermen that we know and support. We strive to use seafood caught using sustainable fishing methods whenever possible. We also strive to buy local produce and use local vendors. We own and operate our own dock ensuring the freshest and superior fish for our customers” 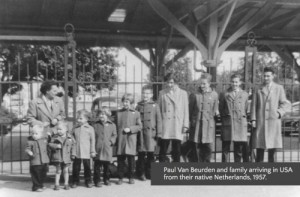 His family is no stranger to the restaurant business.  His family immigrated from The Netherlands to Fresno in 1957.  His Mom and Dad brought with them nine children, so the family had lots of mouths to feed. Paul’s parents shared with him and his siblings the value of a strong work ethic and the will to succeed as what it took to help to support a family. They started in the restaurant business in 1964 in the Yosemite Valley, and then moved to the coast in 1968. “Our goal is to provide you with friendly service and quality home cooked meals in a relaxing family friendly atmosphere, we strive to treat every guest of Dutchman’s Seafood House as part of our family,” Paul added.

Recently Paul raised the bar in the kitchen significantly and asked Chef David Sundeen Jr to be Executive Chef of his restaurant. This young and talented Chef has already made a name for himself.   Chef David is originally from Austin Texas and has worked in a kitchen from the time he was a teenager. 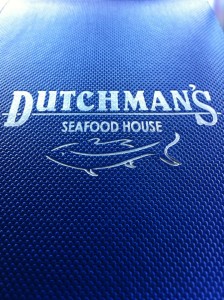 He saved enough money to attend The French Culinary Institute in New York where he graduated with honors, all the while working at La Grenouille in midtown Manhattan. When he and his wife Susan Dumeyer (an Emmy award winning producer and Chef) headed west to Los Angeles he became sous chef at Table 8. Then on to Santa Barbara and landed a job at Citronelle working under Michel Richard then on to become head chef at Buchon.

He has consulted to The Wine Cask, Sivergreens and Cadiz. During his time there he met Bill and Barbara Spencer from Windrose Organic farms in Paso Robles. He moved here with his wife Susan to help the Spencer’s get a chef’s perspective on the operation of a farm.

Chef David greeted us  and retired to his kitchen where he lead a parade of mouthwatering  dishes that left us speechless with delight . 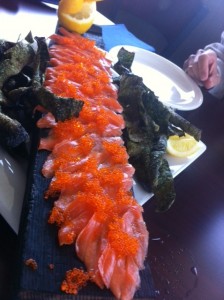 Course 1: Chef was not messing around when he arrived at our table with an In-house Smoked Salmon with Roe and Seaweed on a wine stave. We have had a lot of salmon prepared in multitudes of ways but this salmon was spectacular. The fish was cooked to perfection and the roe was succulent and a delight to the palate. 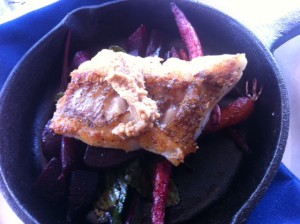 Vermilion Rockfish with roasted beets, greens and a house made mustard made with beer.

Course 2: Getting into is stride Chef David’s next dish was yet another hit. Vermilion Rockfish with roasted beets, greens and a house made mustard made with beer. The fresh caught Rockfish was cooked perfectly plated on top of locally grown vegetables from Windrows Farm. The Rockfish and the Vegetables all combined for a dish that we were still thinking about days later.

Course 3 : Chef hit a home run with this course . King Salmon Collar grilled with pepper and oregano. Many people know that the collar of the fish can be the most flavorful and we found that out first hand! .  The lovely, simply prepared dish held nuances of the grill,  fresh ocean salinity and perfect meatiness joining together for the perfect bite. 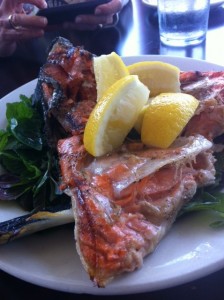 The freshly caught salmon literally melted in out mouth with a slight hit of smoke from the grill made this our favorite of day. In fact, this dish was so tasty that we put down our forks down and used our fingers to pick off every delicious morsel of the collar to treat our taste buds even longer.

Dessert Courses: After enjoying such great dishes from this very talented Chef could there be more?  Chef David said “Yes! “ and here they come.  We ended this Culinary throw down by the bay with a decadent Huge Bread Pudding, A sultry CrèmeBrulee, A heartwarming Apple Crumble and even a Brownie for the Fini . 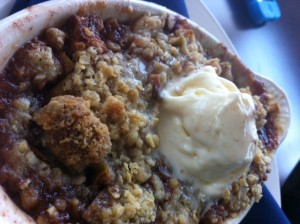 After spending an evening enjoying Chef David’s fresh, imaginative creations we realized that Paul has put together a winning team.  World class ingredients grown or caught literally outside the window of an historic restaurant overlooking Morro Bay and a renowned Chef all combine for what will become the jewel of the Embarcadero in Morro Bay, California.