Downtown Las Vegas has been undergoing quite a renaissance coming out the dark ages of not so many years past. It’s the place to be with locally owned bars, restaurants and shops opening up weekly to the delight of the hip crowd, many of whom live within blocks of this newest resurgence in Las Vegas. 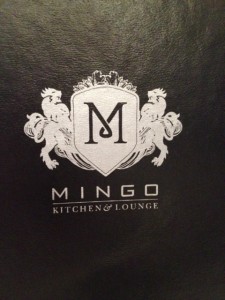 One of the early visionaries was the collaboration of entrepreneurs George Harris, Mingo Collaso and Executive Chef Robert Solano with the opening of Mundo in the World Market Center.  Taking a chance that Las Vegas’s renewed attempt at culture, The Smith Center of Performing Arts, would actually come to fruition, Mundo and the collaboration held on, and today Mundo is now a buzz of activity.  The Smith Center is now the cultural pride of Las Vegas and many guests, Broadway Stars and Musicians are known to frequent Mundo on a daily basis.

Fresh off their success at Mundo the trio set out on their next project of opening Mingo Kitchen & Lounge right in the middle of the Downtown Arts District.  Mingo has recently opened and has already created great interest in the downtown lounge /restaurant scene.

Recently we joined George Harris at Mingo for lively conversation and an inside look at his newest hit.  The first thing we noticed is the beautiful courtyard just outside of the restaurant where guest s can order hand crafted cocktails such as the namesake Mingo , craft beers,  Alien Tequila and dine on Chef Robert Solano’s pleasing creations.

The décor can be described as a mix of “old school “ Las Vegas with plush leather couch lounge seating with a contemporary , modern feel  accented by Silver , Black and white classy color combinations. For those who enjoy sitting at the bar, Mingo’s bar is open, comfortable and features power plugs for those who want to stay awhile and catch up on the Internet chatter. 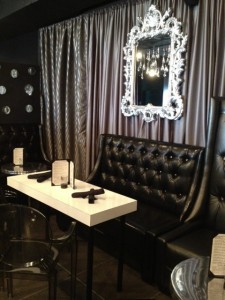 We joined George Harris at a table and ordered up some cocktails to get started.  The beet salad featured fresh, peppery arugula and plenty of tasty beets topped with a crispy Parmesan crisp for richness. 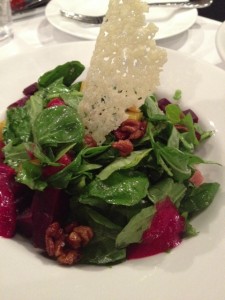 We had heard about the Mac and Cheese so we had to see for ourselves if it was as good as we were told.  The plate arrived and the melting cheese aromas enticed our palates for what is one of the best versions of Mac and Cheese we have had in a very long time.  Perfectly cooked pasta topped with three creamy, steamy, rich cheeses was a huge favorite of the day and we would come back just for that. 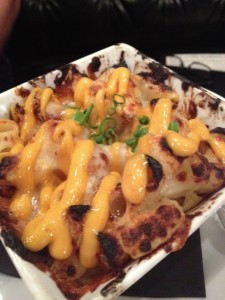 Chef Robert is known for his skill in using interesting flavor profiles in his dishes. We finished with perfection; the honey –glazed Mahi  Mahi , a blend of sweet, spicy and savory flavors in each bite. The menu also features small bites like tomato and mozzarella crustini, spicy fried wings and sliders, just to name a few.

This all-star team of entrepreneurs has a huge hit on their hands, judging from the standing room only crowd that goes until the early morning hours. Mingo is a great place to “hangout” with friends; enjoy great cocktails, small bites and even a sumptuous ribeye at prices that are easy on your wallet. Congratulations to the new opening and you will be seeing us mingling at Mingo.