Las Vegas is always changing and coming up with new concepts. When traveling, ever discover a great meat shop and wanted to ship your treasure home? Or treat your family to the best ice cream they’ve ever had, or some Paris-worthy macaroons? This fall, the Las Vegas strip has a treat for you.

Los Angeles chef and restaurateur Sam Marvin, known for originating creative culinary concepts, is launching no less than five of them at the upcoming Grand Bazaar Shops™, an outdoor retail, dining and entertainment destination to open this fall on the busiest corner of the Las Vegas Strip.

He  first made his mark in Las Vegas from 1997-2002 as chef at Piero’s, which Zagat ranked as the top Italian restaurant in town during his tenure, he  returned last fall to open the acclaimed Echo & Rig Butcher and Steakhouse in Summerlin.

This amazing Chef is known for his ambitious, best-in-class philosophy and is developing five separate shops selling artisanal cupcakes, ice cream, macaroons, meats and spices.  “For me it was a no-brainer,” says Marvin. His is decision began with the unequaled location, Las Vegas Boulevard and Flamingo Road, across from the Bellagio fountains and flanked by Bally’s Las Vegas, Caesars Palace, Flamingo Las Vegas and Paris Las Vegas.  One of the world’s busiest intersections, it’s a site that more than 20 million pedestrians walk through annually. 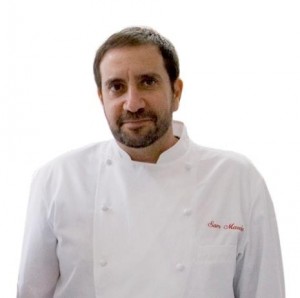 “Grand Bazaar Shops really fits my own brand,” says Marvin.  Many of its tenants are firsts in Las Vegas, the U.S. or worldwide, with some of its key retailers to date including Swarovski, Swatch, Superdry, Havaianas and Campo Marzio.Five shops “felt like the right number” stated Marvin, who spread them around the two-acre property, choosing the best location for each 144-sq. ft. business.  His ice cream boutique will be right on the Strip at the front, appealing to those who stroll by.  Having lived in Europe for ten years, where specialty shops of all kinds gain a reputation for being “the best,” Marvin sought to develop a similar, must-visit destination offering “chef driven, artisan quality ice cream,” with a curated selection of rotating flavors and forms.

Marvin’s philosophy of launching venues that fulfill people’s needs, rather than just the whims of imaginative chefs, comes to life in his cupcake shop.  “A cupcake is an easy sweet to pick up, something small and decadent!” he says, and as the father of a nine-year-old and a six-year-old, he recognizes their appeal.  With a nearby kitchen to make all of his cupcakes fresh daily, his portable desserts will taste as good as they look, many topped by fanciful designs.

“At Bottega Louie we’d sell literally hundreds of macaroons a day,” Marvin says, and he liked the idea of opening a macaroon shop in the complex “near another cool brand” like Swarovski.  Macaroons were one of the first concept shops he considered when he signed a lease more than a year ago, becoming one of the first official tenants of Grand Bazaar Shops.

We look forward to this Fall where we can see the famed Las Vegas strip can another world class venue.