For decades Miami has been known for its vibrant night life and world class dining featuring cuisine from every corner of the world. Being a third generation Miamian we were anxious to return and explore some of the latest dining options offered in South Florida. 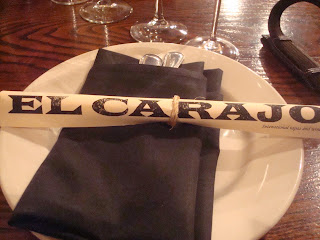 We were very aware of some of the big names now in Miami but when we hit the road we also explore as many unique local restaurants as well. Our first call was to local wine expert and consultant Barry Alberts who has been “in the know” of the Food and Wine scene in Miami for over 30 years. He suggested we join him at El Carajo for some wine and tapas . Of course we jumped at the opportunity to sample dishes from NBC Miami’s Gold award winning restaurant.

The directions to EL Carajo startled us to say the least. Barry told us to go to 17th and US1 and pull into a gas station. The restaurant that he was so anxious to show us was inside! Yes , walk past the gas pumps , chips , beer , candy and soft drinks and at the rear of the store is El Carajo. If it would have been anyone else who suggested eating in a gas station on our first night in Miami we would have graciously declined . However trusting Barry and knowing is passion for Wine and Food we went . After all , it was HIS reputation that was on the line. 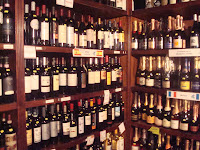 Walking into EL Carajo with its lovely aromas of spices, meat sizzling on the grill and attentive host , we forgot we were literally inside a working gas station. Rack after rack of fine wines at affordable prices called out to us to make a selection. EL Carajo also features a “high end “wine room where Caymus and many Champagnes are available for the most discriminating tastes. 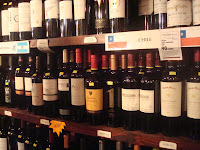 With Barry’s expert guidance we joined him in a palate pleasing bottle of Senorio De Sarria Navarra Reserva 1998. This was the perfect selection for what was to come. 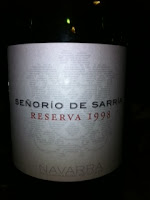 Looking over the menu, is was not an easy choice with many selections to choose from. Ensalada de Camarones ( mixed greens and Shrimp ) Potage de Colorados ( Red Bean Soup ) stood out for starters. Cold Tapas like Combinacion Meson ( ham , sausage and Manchego Cheese from Spain and Boquerones Espanoles en Vinagreta ( Spanish Anchovies in Vinaigrette sauce ) caught our attention as well. 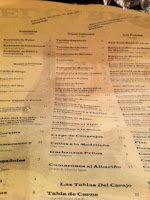 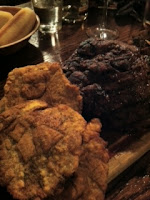 We settled on one of their larger entres , Tabla de Carne . This assorted meat plank featuring Chuletilla de Cordero , Chuleta de Cerdo , Carne de Res , Morcillas, Pollo , Chorizo Criollo and Papas y Tostones is a Spanish carnivores delight that was one of the best meat dishes we have had in a long while.

Of course being in Miami one cannot dine without finishing a meal without Flan and Café con Leche . El Carajo ( not far from Little Havana ) is as authentic as it gets. 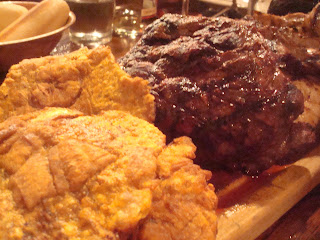 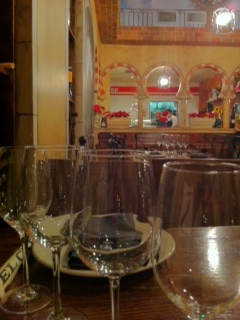 We feel very lucky to have dined in some of the world’s best venues. After our experience at EL Carajo , we can see why is has become a big hit . Our advise, get there early and spend more time exploring gas stations. You never know what hidden secrets they may reveal.