Aqua Blue water with the sun casting sliver highlights over a surface like glass , ducks and turtles in great abundance frolicking amongst the cattails and majestic swans sailing across the lake like the great Tall Ships of the past. This projects a very idealistic scene and this one is located in the Desert Oasis of Las Vegas . Garfield’s Restaurant located in Desert Shores is such an idealistic place and a reality of great food, wine and spirits . 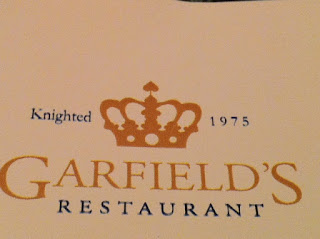 Garfield’s is named in honor of Sir Garfield Sobers, Knighted by Queen Elizabeth II on the playing fields of Barbados in 1975. Sir Garfield is considered the greatest all-around Cricket player of all time. 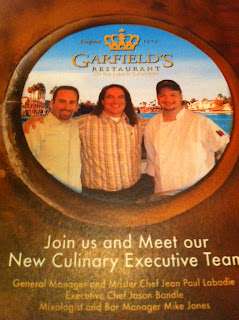 Garfield’s has recently taken a step into culinary history when they assembled their new Culinary Executive Team led by General Manager and Celebrity Chef Jean Paul Labadie . He teamed with Executive Chef Jason Bandle in the kitchen and is joined by Mixologist Mike Jones at the bar. This team comes together to provide the Freshest, Organic, Farm-to-Table cooking and great service . Guests can enjoy the lake’s model Sailing regattas and wildlife while experiencing some of the areas best food with a relaxing view.

Chef Jean Paul Labadie is native of Puerto Rico, and was influenced by the rich flavors of this Caribbean Paradise . His dishes also show his experience with Spanish cuisine prepared by his grandparents from Spain and Italian specialties created by his great-grandmother from Italy.

Jean Paul’s culinary carrier began by studying hotel and restaurant management at Iowa State University. Its was not long before he realized his true passion was to become a chef and went on to receive a degree at Western Culinary Institute in Portland, Oregon. After all, restaurant management has been made a lot easier with the introduction of Restaurant Accounting Software – so it’s nice to roll the elbows up and actually produce the food instead. 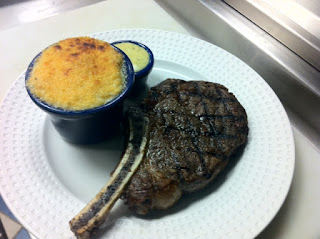 He returned to Iowa and joined up with his long time friend and restaurateur, Bob Cummings. Working with Cummings’ gave Jean Paul a true understanding of the realities of running a restaurant.

He moved on to gain experience in the art of fine dining and cuisine and worked as sous chef under the direction of Chef Terry Boston at the Des Moines Golf &Country Club. The farming traditions of the Midwest and high expectations of Chef Boston solidified Labadie’s appreciation of quality meats and produce. 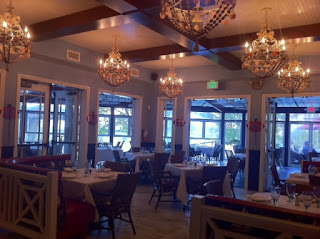 Labadie’s next career step took him to New Orleans and his road to Celebrity status was well on the way . The excitement and the creativity of this Culinary city was a perfect match with for him and his love of food. Jean Paul spent a year at Emeril Lagasse’s flagship restaurant, Emeril’s, before he was off to Las Vegas to serve as a sous chef at Chef Lagasse’s third restaurant, Emeril’s New Orleans Fish House where we first
met this very talented Chef. He quickly rose to the position of Chef de Cuisine. After a successful six-year run, he was tapped to open Emeril’s newest restaurant, Table Ten at the Palazzo on the Las Vegas Strip.

Chef Jean Paul then joined the Las Vegas legendary restaurant Marche Bacchus as the Executive Chef . After wining TV’s Extreme Chef and after other numerous TV appearances , he has now settled at Garfield’s Restaurant. With a very talented Front and Back of the house , we have little doubt this will be a perfect fit.

Garfield’s is very big in the promotion of the Slow Food Movement . This is a non-profit organization which was founded by Carlo Petrini in response to the 1986 opening of a McDonalds in Rome’s Piazza Spagna.

The mission of Slow Food is to counteract fast food and fast life, the disappearance of local food traditions and people’s dwindling interest in the food they eat, where it comes from, how it tastes and how our food choices affect the rest of the world. Today, there are 80,000 members world-wide.

Its is not only Just about the Cuisine at Garfield’s but great wines by the bottle and by the glass. And if it is a world class cocktail you are in the mood for , Long time expert Mike Jones creates some of the best cocktails in town along with a little humor all in his own unique style. 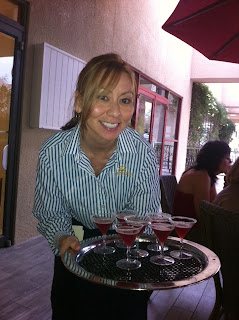 Garfield’s has become one of those Restaurants that you can call home and celebrate special moments in our lives. On any given day , you can see the many “regulars” at their special seat in the lounge being entertianed by Mike Jones or you may be greated at the door by a Celebirty Chef
and served table side by servers who bring their experise from some of the finest venues on and off the strip. This restaurant with a veiw also offers concerts by the lake , complenetary wine tasteing events and special events of all kinds. If you have not been to Garfield’s lately it might be time to check it out again .

If you have never been, then there is no time like the present . Sit back enjoy the view, have a beverage and experience some great
dishes from a celebrity Chef. For more information on Garfields and their events please visit http://www.garfieldslasvegas.com