Dallas Texas, widely known for its BBQ, Mexican cuisine and Steakhouses, as well as the local bars that many consider do more than enough to rub shoulders with the best restuarants in Dallas, has a new star to add this renowned city and Lone Star state. Nationally acclaimed, James Beard-nominated and Bravo’s “Top Chef” contestant Chef John Tesar will open KNIFE late-April in downtown Dallas on 5300 E. Mockingbird Lane.

Chef Tesar is well regarded for his modern American cuisine prepared with classic European techniques. His culinary artistry has garnered much acclaim throughout his 20+ years in the restaurant industry, most recently including a 2014 James Beard Foundation “Best Chef Southwest” nomination. Knife is Tesar’s second restaurant in Dallas, including his highly acclaimed Spoon Bar & Kitchen, which has been recognized by Condé Nast Traveler, Bon Appétit and Esquire as one of the best new restaurants. 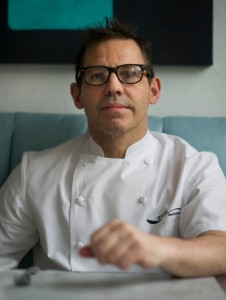 “I have traveled across Texas and America eating in just about every known steakhouse to see how to improve upon the experience, first from a quality and creative standpoint and then economically,” said Tesar. “I want to up the ante on the steakhouse and give people a little of what they expect from a traditional steakhouse, but also surprise them with specialty cuts you rarely find cooked in unique ways.”

“All of our restaurants are driven by very creative individual chefs who focus on local, sustainable ingredients and seasonal menus. We’re excited to collaborate on Knife with Chef John Tesar, who is a clear talent on Dallas’ dining scene,” said James Lin, SVP of Restaurants and Bars at Kimpton Hotels & Restaurants. “He brings a unique concept and a true visionary culinary team that will give our guests an experience they won’t find anywhere else.”

Unlike most steakhouses, the menu will incorporate an extensive charcuterie program, grass-fed bison and lamb and specialty breeds of pork, chicken and seasonal game birds, as well as a full line of house made sausages, hot dogs and brats. Tesar will even feature his signature C-Vap cooked burgers, praised for their perfectly medium-cooked insides foregoing the heavily charred edges that regular pan preparation causes.

Bring your friends, share and socialize. KNIFE offers larger portions or “Slabs” to share for groups, as well as interactive dishes such as pork belly brisket, house cured pastrami and pig’s head served with international bread and sauces. In the mood for pasta? Knife makes all pasta in-house, and offers fresh seafood and vegetarian main dishes, family-style seasonal salads and raw bar selections.

It’s not just about incredible food at KNIFE. It takes teamwork and Tesar has assembled quite a team. Design firm Breckinridge/Taylor created a space and platform to display his unique brand of culinary artistry with an artistic and appealing design. The decor offers modern sophistication combined with traditional steakhouse elements that one would expect with rich fabrics, leather upholstered chairs, rustic chandeliers and warm wood paneling.

Knife’s culinary team, of course, was selected by Tesar. Chef de Cuisine Jeffrey Kent, who has opened numerous restaurants, including Arizona 206 and Bistro 26, both earning accolades from the New York Times will captain the ship. Long before the term “farm to table” was commonplace, Kent was connecting a large network of fish suppliers directly with producers. Master Pastry Chef and James Beard award semifinalist David Collier reinvents classic desserts in his signature modernist fashion while local mixologist Michael Martensen and advanced sommelier Scott Barber have designed the opening bar and wine program to complement the menu with a strong emphasis on creativity and individuality. Sabrina Snodderly, the original sommelier from Spoon, will manage the wine program on-site.

KNIFE will be open seven nights a week and will become a vibrant hotspot after the sun goes down, with host DJs spinning and a late night dining menu until 1 a.m. on the weekends. Dallas has a new place to sip, dine and party. KNIFE will quickly rise be on the top of everyone’s list to visit.