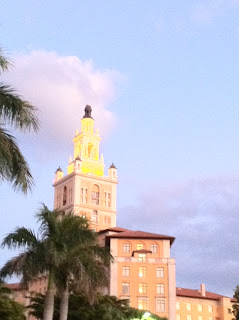 The historic Biltmore Hotel is home to the exclusive Biltmore Spa, the Biltmore Golf Course and the award-winning
Palme d’Or restaurant . This legendary Biltmore Hotel in Coral Gables has been a favorite of world leaders, celebrities, and sports stars since its opening in the 1920s. Offering much more than exceptional accommodations, the Biltmore Hotel showcases championship golf, cosmopolitan dining and a luxury spa. This very Grand Lady has remained Miami’s only four-star, four-diamond hotel for six consecutive years.It was designed by Schultze and Weaver and was built in 1926 by John McEntee Bowman and George Merrick as part of the Biltmore hotel
chain and was designated a National Historic Landmark in 1996. The Biltmore as served as a hospital during World War II and as a VA Hospital and campus of the University of Miami medical school until 1968. 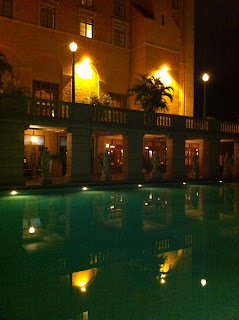 When completed, it was the tallest building in Florida, surpassing the Freedom Tower in Downtown Miami. It was surpassed in 1928 by the Dade County Courthouse, also in Downtown Miami. At one time the pool was the largest pool in the world and among the many attractions was swimming instructor (and later Tarzan actor) Johnny Weissmuller.The hotel has been used as a setting for the movie Bad Boys and television programs like CSI: Miami and Miami Vice.
It was a real pleasure to experience this lovely hotel and dine with Florida Historian and Author Dr. Nancy Dale who took a break from book signings of her most recent publication: The FLORIDA PIONEER “Cow Hunters and Huntresses” – In their own words, to discuss with us
the art of wine/food pairing as we sampled Chef Philippe Ruiz’s special dishes prepared for our table.The Biltmore’s signature restaurant, Palme d’Or, brings an authentic taste of France to Coral Gables. Since taking the helm at Palme d’Or, Chef Philippe Ruiz has won accolades for his interpretation of French Nouvelle Cuisine. His award-winning cuisine has “raised the standard” on the South Florida culinary scene, according to the Miami Herald, which has twice ranked the restaurant as “exceptional.” Rated the top restaurant by the 2010 South Florida Zagat Guide, the Biltmore’s stunning signature restaurant presents an unparalleled dining experience. Both Chef Ruiz
and his Palme D’ Or were semi-finalists for the coveted James Beard Awardas well in 2009 .

Chef Philippe Ruiz explained that Patrons who dine at Palm D’ Or have the option custom-design their own dining experience around the 20-plus
offered tasting dishes and an award-winning wine list.

Philippe Ruiz, joined the Biltmore in July 1999 as Chef de Cuisine of its signature restaurant Palme d’Or, where he has received the highest accolades for his ingenious interpretation of French nouvelle cuisine.Ruiz’s position at the helm of Palme d’Or has elevated the restaurant’s ratings to the highest echelon of South Florida’s dining scene. The Zagat guide says, “Life never felt so good at this elegant venue with superb new French fare.” Florida Trend Magazine crowned Palme d’Or as “Best French restaurant in the state of Florida.”

We were fortunate to be in attendance In 2006, when the government of France honored Philippe Ruiz with the title of Chevalier de l’Ordre Du Mérite Agricole. The award, first established in 1883, recognizes the “continued and significant contribution to the quality, advancement and success of the agricultural and food sectors.”

This very talented Chef began his culinary training at the age of 14 at the Hotel School in Bonneville, France. There, Ruiz earned such triumphant certificates of accomplishment as the Yves Thuries Trophée and La Poularde d’Or from the illustrious Master Chef Georges Blanc, who recognized Ruiz as one of France’s foremost young culinary prodigies.Ruiz went on to build his professional repertoire with stints at Two-Michelin-Star Château de Divonne in Divonne-les-Bains, France; at
Two-Michelin-Star Le Chat Botté at the Hôtel Beau Rivage in Geneva, Switzerland; and at Le Vieux Moulin, a Two-Michelin-Star property, also in Geneva. Ruiz’s talent took him overseas to the Caribbean, where he was Chef de Cuisine in St. Martin’s renowned La Samanna resort prior to joining the Biltmore in 1999. 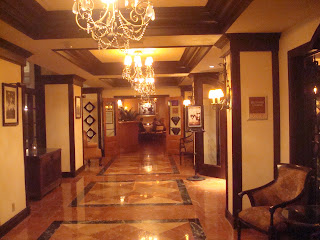 Entering Palm D’Or reminded us of the “grand old days “ of fine dining that now, in many cases is a distant memory. You can almost hear the orchestra playing and muddled voices of the guests at the Bilmore’s grand opening gala in 1926. An upscale piano bar and lounge is located just off the main entrance to this very classic French diningvenue.Walls of awards, Marble Floors, fine linen table cloths and chandlers adorn the dining areas. The service is some of the best that we have experienced, complete with a very attentive server that was at the tables beckon call with the wave of a hand. Chef Ruiz greeted us table side
as we sipped our Champagne and sampled a lovely Amuse Bouche. 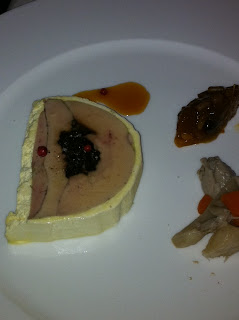 Our first course of Foie Gras was has classic as its gets and prepared to perfection. The Sauternes reduction was a very nice touch of sweetness that balanced the dish perfectly.Braised Mediterranean John Dory with Sevruga Caviar,
Extra Virgin Olive Oil, Potatoe Boulangere and Baby
Leaks 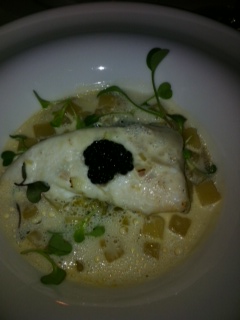 John Dory and Caviar all in one dish was a work of art with as our palates began to water when this pretty and mothering dish was placed in front of us. The Leeks and Potatoe Boulangere provide an exceptional base to the
dish.Grilled Maine Scallop with Spanish Chorizo, Fresh
Artichoke Barigoule 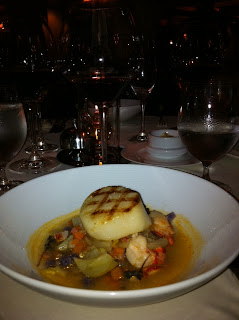 Scallops and Chorizo with Artichoke Barigoule provided us a nice take on a French dish with a Miami twist.Roasted Grass Fed Beef Tenderloin Rossini with Wild
Mushroom and Black Truffle Sauce 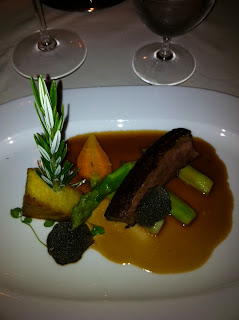 Chef Ruiz holds true to creating dishes that are high quality and in many cases sustainable. His Roasted GrassFed Beef Tenderloin and very rich Black Truffle Sauce provided us with a perfectly cooked earthy dish that melted in our mouthsBuche de Noel “Black Forest” Chocolate , Vanilla and
American Cherries 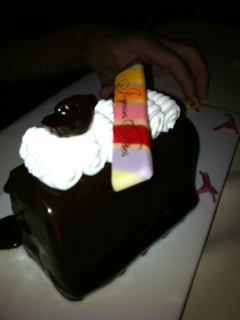 Of course we had to sample Palme D’Or’s Buche de Noel to literally put “ the cherry” on top of our gastronomic evening at this exquisite restaurant.
After spending an evening at Palme D’Or we saw how close you can get to perfection from the time we walked in the door, the service and the culinary artistry of Chef Philippe Ruiz . Palme D’Or with its old world elegance with a breath of fresh air and a must visit on
any visit to Miami.
Scroll to top