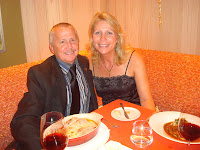 We have had the opportunity to speak with Executive Chef Theo Schoenegger on a few occasions . This time we visited his restaurant Sinatra located in Steve Wynn’s
newest work of art , ENCORE.The restaurant pays respect to Frank Sinatra
and Chef Theo Schoenegger does his best Sinatra impression using his impressive
talents in the kitchen for a very special dining experience.

Displayed near the restaurant’s entrance are awards chosen by Steve Wynn and the Sinatra family that showcase Sinatra’s vast career and achievements. Included are his Oscar for From Here to Eternity, his Emmy for Frank Sinatra: A Man and His Music and his Grammy® for Strangers in the Night. Photos of Sinatra, a gold album he received for his Classic Sinatra album and a letter penned by Sammy Davis, Jr. grace the walls of the restaurant.
The restaurant’s soundtrack features classic Sinatra as well as tunes from his friends, including Dean Martin, Sammy Davis, Jr., Tony Bennett and Nat King Cole as well a his films on TVs at the bar. 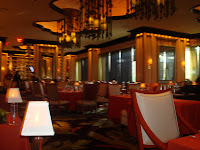 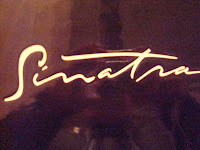 Sinatra is located off the casino floor and has become a romantic hot spot on the strip. Chef Schoenegger’s showcases Italian dishes prepared with seasonal ingredients and his menu highlights dishes from northern Italy and includes pastas, risottos and game meat dishes.

He opened Sinatra at Encore after five years as executive chef of the Patina
Group’s signature restaurant, Patina. His menu helped the restaurant win a three-star review from the Los Angeles Times and a coveted Michelin star.

Growing up in the town of San Candio, Italy, Schoenegger found his calling at
age nine when he started helping his mother in the kitchen. At 18, he began a
five-year program at a culinary school in Merano, Italy. After graduation,
Schoenegger moved to Munich, Germany to work at the restaurant Aubergine
Tantris. While in Munich, he met restaurateur Tony May who asked Schoenegger to
join him in New York City.

Schoenegger left Germany in 1986 and worked for May first at Palio restaurant, then at San Domenico. During his time as executive chef, San Domenico was considered the premier Italian restaurant in the country and received a three-star review from the New York Times.

In 1996, Schoenegger headed to Palm Beach, Florida where he worked as
executive chef of Aquoria for four years, and then returned to New York to
reopen Rock Center Café with Nick Valenti and Restaurant Associates. Shortly
thereafter, Schoenegger accepted the position at Patina and moved to Los
Angeles. 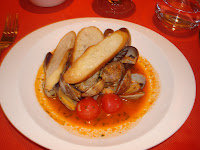 The menu is divided into assagini, antipasti, primi, pesci, carni and contorni,
followed by dolci.

Signature primi options include a classic zuppa di fagioli, made from a cream of borlotti beans, tubettini and garlic-rosemary oil; agnolotti with ricotta, herbs, chives and winter truffle; and risotto con astice made from organic Arborio rice and Maine lobster. 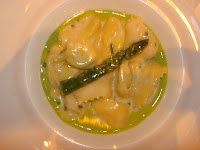 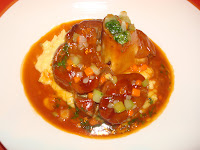 For a main dish, guests can choose from a selection of pesci and carne dishes, such
as cioppino with lobster, scallops, clams and fennel in tomato saffron broth; the “New York,” consisting of dry-aged 16-ounce New York strip with cipollini onions and king trumpet mushroom; and ossobucco “My Way,” a braised veal ossobucco with risotto cannelloni and gremolata. Contorni include capponatina, which is a vegetable atatouille; polenta mantecata with mascarpone and parmesan cheese; and funghi trifolati, a wild mushroom sauté. 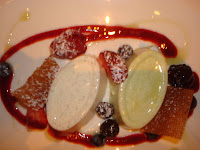 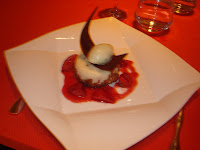 For dessert, the selection of dolci includes include zeppolini, warm little
doughnuts filled with lemon raspberry and zabaglione; torta di ricotta, a lemon
ricotta cheesecake with raspberry sorbet; and a daily selection of homemade
gelati and sorbetti.

Our visit to Sinatra was an amazing experience from a stop a the beautiful bar for a cocktail and then on to our table with exceptional service and one of a kind dishes. If you like “Frank” and want to dine like he once did in his favorite city, Sinatra is worth a visit.