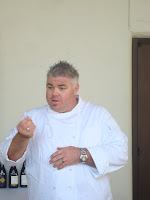 Chef Todd Fisher is a local icon and knows the culinary value of the Salinas Valley
first hand. He showed off his culinary talent to the Cuisineist and created a
lunch that showed off the products of this very fertile valley that supply’s
most of the U.S.A’s vegetables 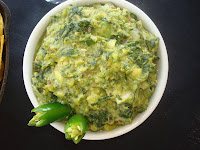 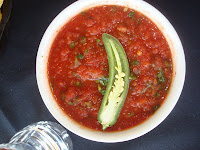 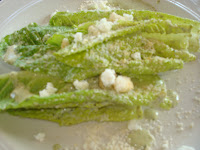 The Chef’s Caesar salad with Andy Boy Romaine Hearts was probably the freshest that we have had, understating we were very close to where it was grown. 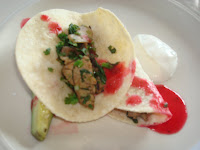 We have always considered Chefs culinary artists. Todd Fisher’s Broccoli Rabe & Carne Asada Tacos was a true culinary work of art. He really captured the flavors of the Salinas Valley with this dish. 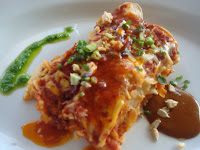 The next dish that was layered in flavor was his Colored Cauliflower Enchiladas . This dish was paired with the Nth Degree 2007 Pinot Noir and was in our opinion the best pairing of the afternoon. 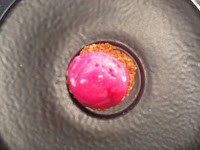 Last but not least Chef came up with a very interesting and very appropriate desert,
Pickly Pear Sorbet. This was so on target as we had just visited a Cactus Pear farm with Margaret D Arrigo of D Arrigo Brothers Farms in the Salinas Valley.

Join Scott from The Cuisineist as he speaks with Executive Chef Todd Fisher about the dishes he created and the Salinas Valley. To find out more about Chef Todd Fisher please visit Cheftoddfisher.com