SHINING ABOVE THE CRESCENT CITY AS A BEACON OF LUXURY

Soaring above the waters of the Mighty Mississippi, the 34-story tower of the new Four Seasons New Orleans is beckoning those well-heeled travelers to find respite, refreshment, and pure pleasure as a premier player in New Orleans luxury hotel offerings. The original tower built as a part of the World Trade Center and International Trade Mart in 1968 and recently added to the National Register of Historic Places in 2014 was the design of prominent architect Edward Durell Stone. Hotel guests now can experience an observation deck with 360-degree panoramic views of the city as a part of the approximately $500 million in buildouts. Having such a historical landmark as a foundation for formulating the new Four Seasons seems appropriate in a city that has risen from years of unprecedented challenge.

Synonymous with the thought of luxurious accommodations is the hotel brand the Four Seasons. Even at the height of one of the most challenging times in history, the Four Seasons continues to build, innovate and pivot passionately into the new normal with their Lead with Care Program. Having the confidence in a brand is essential to go forward with the utmost care in health protocol while offering the same stellar service and amenities that the Four Seasons is world-renowned for throughout the world. “I approach things that could attract and satisfy a customer,” said Sharp in a recent interview. “That approach is how the company has been able to innovate constantly over the last 60 years.” Innovative attention to detail while building in the face of adversity and challenge is admired but risky in an environment of such ongoing uncertainty. 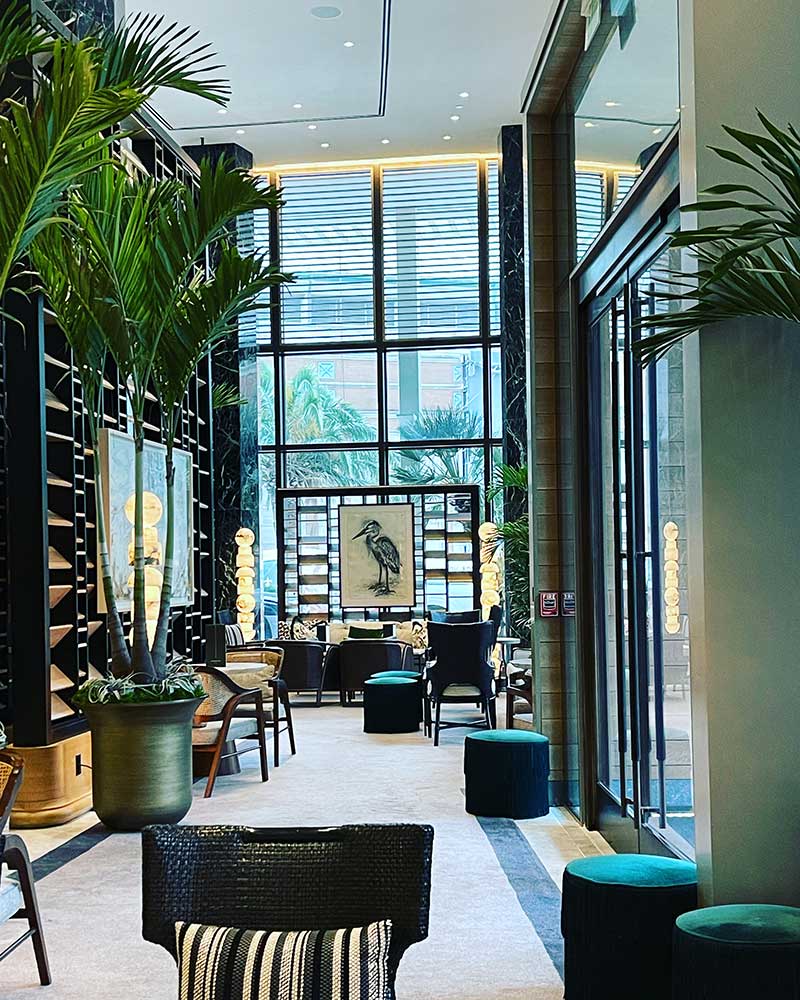 Upon arrival, in the elegant Porte-cochere, the dazzling dabbled light of the 15,000 bohemian almond and pendeloque crystals from the hotel’s magnificent center art installation dances off the highly polished repurposed original marble. Entering the doors, The Chandelier bar, a curvilinear center bar surrounded by intimate seating areas separated off for quiet conversation by Louisiana artist George Dunbar’s clay and gold leaf panels, is the anchor of hospitality. After a long flight or a long day, this is where one can leisurely gaze at the many carefully curated art installations by Kate Chertavian Fine Art. Taking a seat under this shimmering light installation gets better with an authentic New Orleans cocktail, the Sazerac, to name one of many libations that guests can linger over, sip, and savor beneath this waterfall of light. 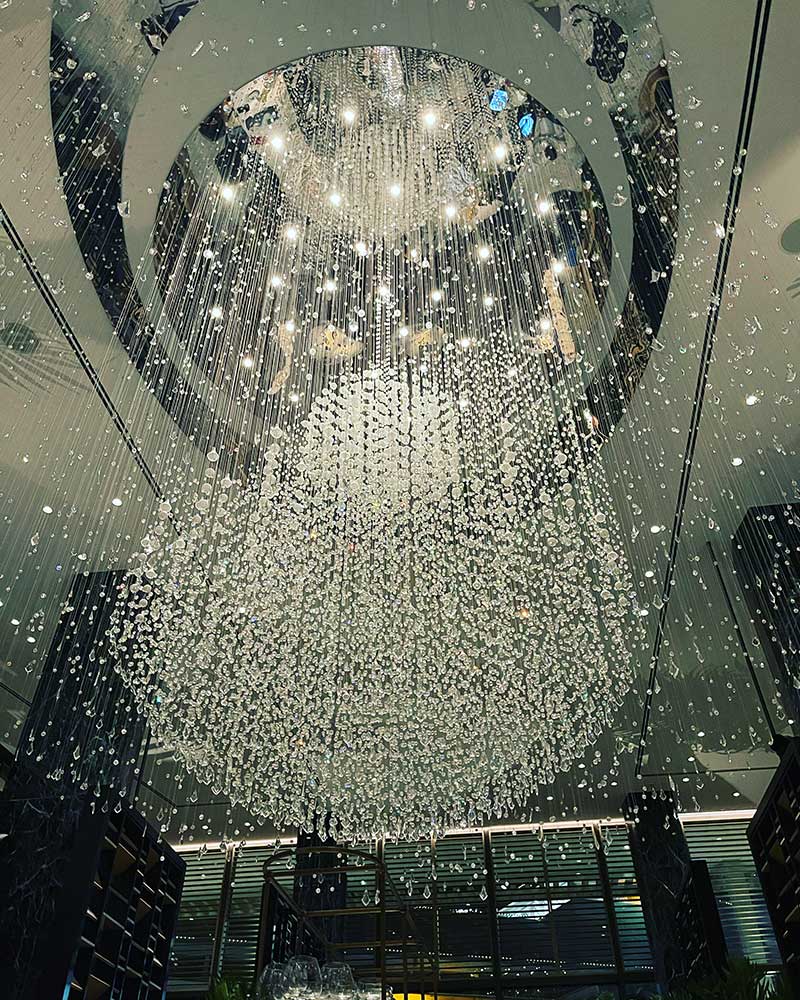 Keeping with the naturalist ebb and flow of line, value, texture, and color, the two dining options with the hotel embrace this inspiration. Miss River is the cuisine creation and “love letter to Louisiana” of local New Orleans Chef Alon Shaya, located just outside the stunning hotel lobby. The menu is inspired by the waters just feet from the hotel, but his take on the fried chicken has the town talking. The buttermilk fried chicken is served tableside with several sauces worth the startling price for this rendition of comfort food perfection. 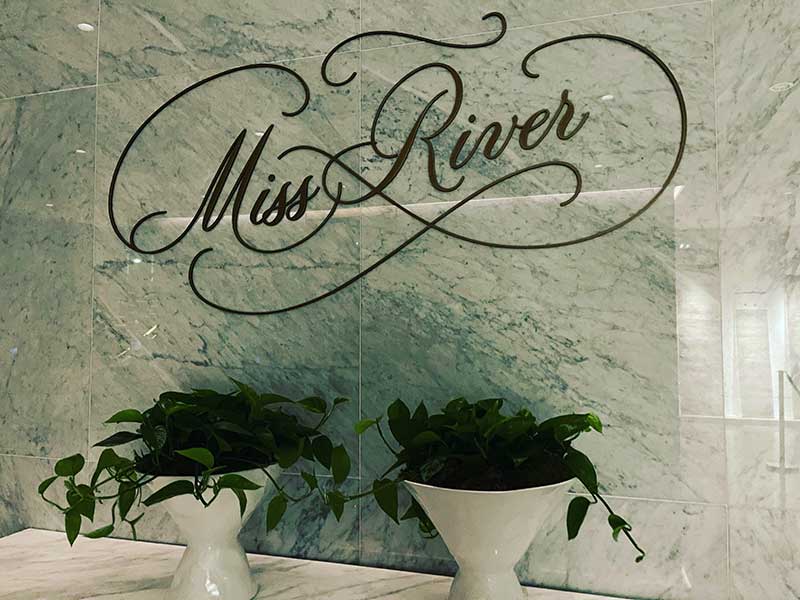 Upstairs, Native Culinary Son, restauranteur Donald Link stages his Chemin a la Mer, or Pathway to the sea with Gulf-harvested cuisine, emphasizing impeccable regionally curated menu from this James Beard award-winning chef and executed by resident chef, Nicholas Owen. The floor-to-ceiling windows give a bird’s eye view of the waterfront lights as they dance across the Mississippi’s restless waters. Dining begins with an awe-inspiring ambiance, and attention to detail as the walls embrace the theme of the river with a naturalistic mural of herons, spoonbills, and waterfowl. Begin with a seafood tower for a complete ensemble of tastes and bites from the gulf waters or the freshest oysters from the oyster bar. Aside from the abundance of seafood choices, steak or the lamb chops deftly prepared with tapenade and crispy Panisse is available for those with a penchant for protein. Utilizing the best in classic French cooking with locally sourced ingredients, Donald Link expands his New Orleans culinary expertise with flair and style.
After a decadent meal, retiring in one of the 341 expertly designed rooms is an indulgent pleasure as great care exudes from the design. The rooms accent the feel of lightness, air, and water with an expansive view of the waterfront. The palette of cool colors, pale grey, light blue, and gleaming whites with white-washed oak furnishings outfitted by buttery soft white linens sets the stage for relaxation. A stunning tri-panel textured wall treatment above each bed depicting curving tree branches adorned with the state’s flower Magnolia eases the eye and the body into a state of rest. The large soaking tub washes away any care, while the luxurious linens caress the skin with gentle softness, preparing the body for another day in the Vieux Carre.
Founder Isadore Sharps’ mission of caring for and investing in people carries throughout the generations of dedicated and discerning travelers who continue to seek out this industry standard. With progress and health in mind, The Four Seasons New Orleans is where the wonder of true Southern hospitality comfort and attention to detail shines above the water of the Mighty Mississippi River.
Scroll to top