Emeril Lagasse, a name synonymous with Restaurant Innovation and Flavor, has again brought winning “BAM” to his creative take on Sea Food with the recent renovation of the Fish House at the MGM Grand.

Removing the exterior gate to allow better flow into the restaurant has also opened up the flow of new diners into his iconic space. An expanded raw bar, extra seating and a few new twists to the menu will allow the room for growth and expansion.

Although the changes may seem non evasive, there is an increase in vibrancy and pace.
As all things get along with time, sometimes a few little changes can create a whole lot of new energy and that is what Chef Emeril has done with the innovations in the menu and the in the restaurant.

After all, for a Chef to survive and thrive for two decades in Las Vegas he has to be a master of flavors and taste to engage restaurateurs as they face competing with the ever increasing dining choices on the Las Vegas Strip. Along with the Fish House, Emeril’s other stand out restaurants such as Delmonico, Table 10 and his ever popular Lagasse Stadium, have embraced the dance of change and consistency while riding the wave of time and economic flux. Emeril has done it all and keeps bringing the Crowds back to savor his New Orleans goodness here in Sin City. 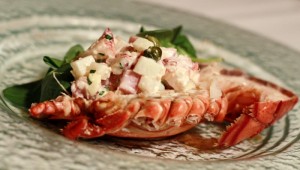 We met with Chef Emeril as he introduced some of the new menu items. We spoke with him and asked what were some of his proudest accomplishments during his 20 years of Las Dining. He stated rather proudly, “ It has been my work with the Lou Ruvo Center for Brain Research , the Andre Agassi Foundation and Three Square “. All of these organizations have enriched his commitment to the community and the culture of dining that has put him into the very fabric of the Las Vegas Scene. As the waiters passed the crystal-fried frog legs with a tangy buttermilk ranch dressing and the slightly spicy sauce piquant alligator meatballs, each guest nodded their approval for all things Cajun reflecting Emerils commitment to his roots. We sampled the perfectly charred and prepared Spanish octopus with cucumber salad in sundried vinaigrette and delicate bay scallop cerviche with spicy serrano chile, hearts of palm, cucumber and cilantro salsa served in butter lettuce cups with shaved radish and jicama slaw that wetted our appetites for more.

We joined this iconic Chef after the fabulous soiree and enjoyed one of the best and most innovative parts of the menu. That is the ability to create your own signature fish dish from a selection of freshly caught fish paired with a bevy of brilliant sauces. No meal at Emeril’s Fish house would be complete without Emeril’s signature Barbecued Shrimp or the Sweet Barbecued Atlantic Salmon.
Along with the signature dishes refreshing libations are a must with Emerils private barrel, eagle rare single barrel Bourbon .The nola peach tea will have your visualizing a sultry day as you sit on the porch sipping the refreshing flavors of fresh squeezed lemon juice, peach puree, and ice tea garnished with candied peaches and fresh mint. Emeil’s own Au Bon Climant Chardonnay is a must when pairing the catch of day. Along with a wide variety of cocktails, wines, there are also Spirit Flights available and domestic and American Craft Beers.

Last but not least, Emeril’s banana pie or the decadent chocolate hazelnut cake will leave you wanting to come back for another 20 years. Thank you Chef for riding the waves of change and leaving a continuing legacy of culinary excellence. Emerils New Orleans Fish House MGM Grand is open from 11:30 a.m. daily.