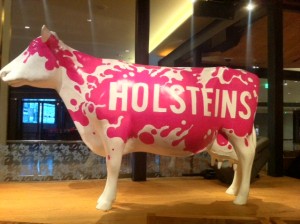 Holy Cow !  we landed in the pasture of Holstein’s restaurant in Las Vegas.  This time we were invited to try some new items that will be coming soon. Under the careful creation of Chef, Anthony Meidenbauer, we were given a sneak preview to the fall additions on the menu.We were pleasantly surprised with our small version of shakes, snacks, tiny buns, big
buns and desserts.
We started out with three mini shakes:  pumpkin, candy cane, and the “cereal bowl”.   The pumpkin was a holiday feast in a glass.  With a rich, dense silky pumpkin infused milk shake with a spicy gingersnap cookie nestled in the bottom of our glass.
The candy cane shake was one that would also fit into a holiday theme but it’s cool
deliciousness is perfect anytime of the year, especially in the summer heat of
Las Vegas.  The cereal bowl brought back memories of sitting at the breakfast table as a child eating good old Capt’N Crunch.Yes, the captain is back but in a glass with some of the cereal sprinkled on top for a little sweet crunch.
After our mini-tasting of the three shakes, we were ready to commence with the snack part of our tasting menu.  The snacks  were a Artichoke ‘GUAC”, in other words, a hummus dip loaded with artichokes, olives, paquillo pepper, capers and olive oil served with spiced pita chips.And to add to that we had a Pizza ‘Twinkie’ a
mozzarella, pepperoni, ricotta cream ‘Twinkie’.  The little bite was somewhat doughy, with a cheesy tomato fondue center.
Now, we were able to try these snacks with some refreshing beers that were paired with each bite.  We were given Indian Wells Mojave Red and the Firestone Double Barrel. Both beers drank well with our tasty morsels.  And for the rest of the evening we were able to sample many other fine and interesting beers with each portion of our tasting menu.Now onto the Tiny Buns which included a Crispy Pork Belly Bun; Asian flavored wrapped in a Chinese steamed bun with hoisin sauce,  cucumber and pea shoots.
The fatty crispness of the pork was delicately flavored with the hoisin sauce which paired well with the Ommegand Abbey Ale.   The Maine Lobster Roll was cooked
lobster mixed with a chive aioli in a grilled mini hot dog bun with Cole slaw.  To this we were given a Blanche De Bruxelles or “Pissing Boy” beer.Unto the Big Buns:
A trio of burgers, of course, ours were in the mini-me version for the tasting, but
full sized versions are available .  The first burger was the Gold Standard; a dry aged beef sirloin burger with smoked bacon, aged goat cheddar cheese tomato confit, baby arugula and garlic-chive aioli, paired with a Haviestoun old engine oil beer from Scotland.
A Dry Aged Burger, now that is what I believe is worth calling the cows home for.  No wonder it is called the Gold Standard, not many can measure up to this juicy, flavorful burger.    The ‘Rising Sun’, a Kobe beef burger with a teriyaki glaze, nori furikake, crispy yam, and spicy mayo and tempura avocado.The sun
does shine upon the deliciousness of this Kobe burger.  The last burger we had will soon be added to the menu and this was a take on Christmas dinner. The am’burger  is a delicious pork that is cured ,smoked and made into patties.  Topped with a
coco-cola brown sugar glaze, grilled pineapple and maraschino cherry mayo. This
burger is everything you could ask for of  an old fashioned holiday meal but in this case it is on a bun .
Our Desserts were prepared by Pastry Chef and soon to be contestant on Bravo T.V.’ s Top Chef Just Desserts, Carlos Enriquez.  This pastry chef will be a prime contender considering the quality of the desserts he presented to us during this
tasting.
We were given some very creative takes on Americana.
For example, the “Apple Pie A La Mode” with Slider and Fries was a take
on something very similar having to do with those golden arches.  This delightful dessert came in it’s own version of the familiar but with a unique taste and bite.
We also were let into a miniature candy store, but at this time many of us were at a point of pushing the dessert cart away, but who can resist candy?
Our favorite on the candy display was a miniature macaroon type cookie which tasted just like a peanut butter and jelly sandwich, and when washed down with the miniature glass of milk, it was absolutely delightful.Last but not least was the Dragon’s Breath”, something Puff the magic dragon would be proud of.
A tiny mound of piped meringue put in liquid nitrogen to produce a smoky surreal effect, that when put in your mouth one can actually have the experience of expelling the ethereal “smoke”
We enjoyed this whimsical experience, leaving everyone in a good mood but with all this great food how could one not be a Happy Holstein?
Scroll to top