He is back!  Renown Chef Daniel Boulud recently announced that The Venetian Resort in Las Vegas will be the next home for the popular New York City restaurant DBGB Kitchen & Bar. He has been missed since he closed his namesake restaurant in the Wynn but has kept a close eye on the all-star culinary action on the Las Vegas Strip. 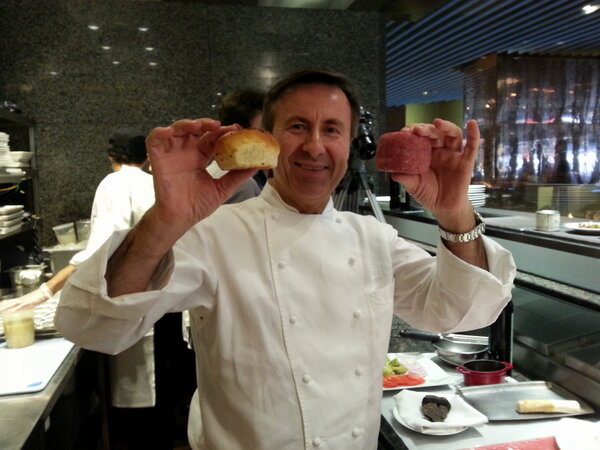 “Staying in Vegas has always been my goal,” said Boulud.  “I am thrilled to be returning with the Venetian and Palazzo, part of the Las Vegas Sands family with whom we already have a successful partnership with in Singapore.”  His db Bistro Moderne opened in 2011 at the Marina Bay Sands in Singapore to high acclaim.

It is no surprise that this all-star Chef is opening in the Venetian Resort.  The Venetian and its sister property The Palazzo already feature a dazzling section of the Nation’s top fine-dining venues.

Boulud added, the DBGB concept is perfect for Las Vegas, giving a casual affordable option with a lively atmosphere.  Boulud also stated “While keeping the roots of my French Bistro cuisine, we fuse rock n’ roll, burgers, bangers and beer, not to mention a big bar with an outstanding cocktail and wine program”.

John Caparella, president and chief operating officer of The Venetian, The Palazzo, and Sands Expo, could not be more excited to add yet another world class Chef under his roof.  “I can’t begin to explain how pleased we are to be the Las Vegas home to such an acclaimed world-class chef as Daniel Boulud,” he said. “We’ve always strived to offer amazing dining experiences by the world’s greatest chefs and Daniel Boulud’s DBGB Kitchen & Bar will absolutely continue this tradition!”

Guests have something to really look forward to. The original DBGB Kitchen & Bar opened in 2009 and is located at the intersection of Soho, the East Village and the Lower East Side. This tasty, palate pleasing venue features over 20 craft beers on tap, 75 beers in bottles, and great value in wines as well. The concept is much more than just mouthwatering burgers, it offers varieties of house-made sausages, towering shellfish platters, and full menu of market-inspired, seasonal Lyonnais cooking. For the FINI , guests can  dig into the classics like baked Alaska, soufflés and ice cream sundaes.

We look forward with anticipation to Chef Daniel Boulud’s triumphant return to the culinary mecca of Las Vegas at the Venetian Resort and Casino.