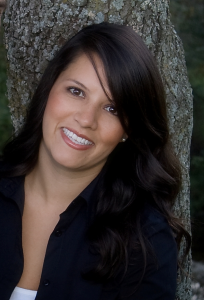 LOVE IS IN THE BEER

Remember the first time you fell in love?  I’m not talking about your first heartbreak, bittersweet and painful as that may be. That’s another type of love altogether.  I’m talking about FALLING in love – the sweet, pure taste of something new and unfamiliar; well that’s kind of what this tasted like.

Let me back up a few months.  Tanilla Knee Deep Porter first caught my eye one unassuming Tuesday night.  As one of the few taps I didn’t recognize at my neighborhood Yardhouse, she stood out as something special.  Her tap, like her bottle’s label had an intriguing tribal design and her brewery, Knee Deep was unfamiliar to me.  The description on the beer list included Tahitian vanilla, chocolate, coffee, and the tears of angels. (Okay, not the last one, I can’t back that up.) I was sold. I love deep, dark porters and this one had me at “Tahitian vanilla”.  A quick Google on the smart phone told me that Tanilla was from Lincoln, California and had an alcohol content of 6.3%.  A few more clicks and I found myself face to face with Tanilla’s father, Brewmaster Jeremy Warren.  From the website I gathered that Knee Deep is a very young brewery (opened March 2011) with roots right here in Nevada. Not only was Mr. Warren educated at The University of Nevada, but Knee Deep is planning to open a Reno location in the very near future. 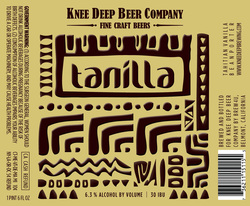 I placed my order with the typical cute Vegas bartender and waited nervously for our first meeting.  Trying a new beer is not unlike a blind date. There’s that anticipation of whether you’ll like each other. Will it keep your interest? What if it smells bad?

The Tanilla did not disappoint. The beer is very dark, nearly black in color with a beautiful, almost grainy tan-colored head. The most striking thing about it at first meeting is the aroma.  It’s very clearly vanilla, but not any vanilla I’m used to.  The scent is warm, musky, even smoky.  I almost expected…well, actually, I didn’t know what to expect , the scent was just  that unique.  The first sip drew me in. Tanilla is a thin vanilla porter, slightly sweet, with a low level of carbonation.  Though the smell is exotic vanilla the taste offers dark chocolate and espresso to the palate. It was as if my favorite vanilla coffee t I could go on and on about the lacing and the mouthfeel and the nose, but frankly, I don’t actually know what any of those terms mean and at best I’d just be a poser, regurgitating terms that I’ve heard tossed out in pubs by much cooler and more knowledgeable people than me.

My lack of beer snobbery cannot stop true love, and true love it was.  I was head over heels for this mysterious brunette with the sweet aftertaste. (Or, should I say, I was Knee Deep in love. wink, wink.)   I remarked more than once that it was the best beer I’ve ever tasted.  Subsequent tastings have taught me new things, as any good relationship should.  For example, as I was delighted to find that my friendly neighborhood Lee’s Discount Liquor stocks several Knee Deep varietals including my beloved porter, I was surprised to learn that I quite prefer her charms on draught.  In a bottle, Tanilla is mellowed out. The flavor is more vanilla coffee than exalting roast.  The aroma remains the same but there’s just something about that keg that lets the lady shine.  Another interesting discovery came when I tried her out with food.  She tends to get lost when accompanying a meal.  Her deep flavors become muted and her sweet aftertaste becomes sticky.  Tanilla is meant to be the star of the show.  She shines as an after-dinner drink or as the main event during happy hour.  This is not a beer meant for mindlessly chugging.  Sip. Savor. Enjoy.

You would think it would be that simple, right?  Tanilla Knee Deep Porter and I would live happily ever after in Beerland (Directions: make a left at Whiskeytown and keep going past Wineville…you can’t miss it!) But the story is never that simple dear reader, there always must be conflict at the end of Act I so we have something to look forward to in Act II.

It was at that precise moment when the Honey Weiss walked into my life.  Leinenhugel’s Honey Weiss, to be accurate. She showed up at my house looking to party one night in a seasonal twelve-pack with her friends Oktoberfest, Red Lager, and Classic Amber.  Each beer was appealing in its own way, but the Honey Weiss really called my name.  The Betty to Tanilla’s Veronica; blonde, perky, sweet and bubbly; I didn’t stand a chance against her charms.  I found myself in a real life Archie Comics love triangle, torn between two delicious rivals – one blonde, the other brunette. 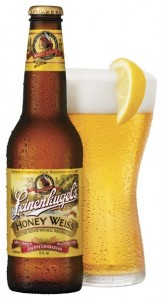 Honey didn’t wait for me to pick her out, she came to me.  She wasn’t a complete stranger, I knew her family. After all, Leinenkugel has been around since the 1800’s and I’ve enjoyed many of their different brews.  I popped the top, settled in front of my fireplace and got to know my new friend.  At first sniff, you’d never know that honey was the supposed to be main event.  When first cracked open and ice cold, the initial impression is almost overwhelmingly lemony, like a perky cheerleader who overdid it on the Bath & Body works Lemon-Verbena body spray.  However, upon further inquiry, I discovered that the citrus was all a front and beneath that first impression lies a smooth, honey tinged taste of heaven.  She’s a wheat beer and a good one at that.  Her alcohol content is 4.8%; less I might point out than the 6.3% of her dusky rival.  What she lacks in strength, however she more than makes up for in personality.  Sunshiny yellow in color, the flavors are bright, ever so slightly citrusy, and finished up with just the right amount of honey.  As the beer loses the initial chill and the carbonation is released, the honey aroma comes front and center.  This is Honey Weiss’s secret weapon.  I was helpless against her considerable charms.  I stood not a chance.  She was so delicious, in fact, that I drank all three bottles from the twelve-pack in place of supper that evening. (Which, as is so often the case when seduced by a blonde goddess, a terrible, terrible idea in the cold, head-pounding light of morning.)

So there I was, the archetypal hero, torn between two equally powerful loves:  light vs. dark, Weiss vs. Porter, blonde vs. brunette, Betty vs. Veronica.

I wish I could tell you that I came to a conclusion.  I nobly chose my one true love and skipped off into the sunset. (Skipped,  not rode, because you should never drink and drive!)  Alas, that was not our fate.  Tanilla and I enjoy our private time together curled up with a good book or occasionally at happy hours.  I think she likes it that way.  Honey Weiss is my party girl; she’s always by my side when the music beckons.  Everyone seems happy and all is well in the magical Beerland.  So I guess we did kind of get a fairytale ending, or at least a comic book one.  Like Archie before me I chose the shrewdest path – I chose not to choose. I continue to enjoy them both. After all, when it comes to beer, there is enough of me to go around.