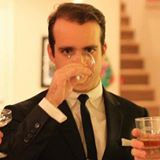 Situated on the artsy suburban Alberta St. in the north-east side of Portland (Concordia neighborhood, or thereabouts), Aviary is an upscale dining spot for the hip young professionals of Portland that want to rebel against the chalkboard-and-communal-bench style eateries that populate the majority of the neighborhood.

It has a modern style bordering on sterility, but a severity that preludes the equivalent severity that characterizes their cuisine.  Coming from Las Vegas, and a guest to the alien culture of P-land, it was refreshing to get the “Yes sir, right this way sir.” treatment again, as opposed to the “Comin’ right up boss, by the way if you like the Pixies you should come hear my band play at the Jukein’ Java on Sunday, no cover.”

Unfortunately, the cocktail list did not benefit from the same forethought.  Each of the four (out of ten) I tried looked alright on paper, unique ingredients or interpretations of classics, but in practice seemed like someone forgot to make them enjoyable.  The wine list could have made up for this, if even a third of their selections could come by the glass.

This is kind of an odd situation, at least in my mind, as they share a name with one of the greatest cocktail spots on earth, Aviary (sister restaurant to the famous Alinea) of Chicago.  Note, the Chicago Aviary has a dedicated Ice Chef, on par with the Sous or Pastry Chef, it’s THAT kind of cocktail bar. 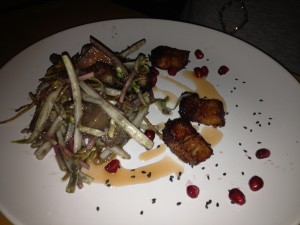 Honestly though, the best of their food should be enjoyed with the clearest mind.  This is nothing that leans on crowd-pleasing fried goods or heavy-handed smoking.  Take for example; their Cauliflower Flan is an appropriate platform for an array of Japanese flavors, using sea urchin, salmon roe, crisp sweet potato, and a cold dashi broth.  Creamy, savory, and spiked with peaks of the sea flavors, it is a very attention-grabbing dish. 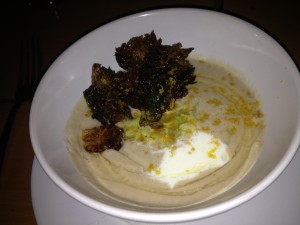 A dish that was a bit simpler, but still great, was the Chestnut Soup.  Very creamy and nutty (obviously), but topped with a dollop of crème fraiche and crispy fried brussels sprout leaves made it a rich, addictive treat.  There was a bit of bottarga grated on top, which could have been an interesting twist to it, but was just not enough to stand up to the rest.

Crispy Pork Belly, which I would have assumed to be just another mandatory pork belly dish, was a great surprise.  Sure, you have little Asian spice-rubbed cubes of pork, but an accompaniment of an endive, pomegranate, edamame, and parsnip “slaw” tossed with a black sesame seed vinaigrette is what really puts the dish over the edge.  Honestly, the slaw itself would have made a beautiful salad for any dish, but it’s crisp, almost smoky flavor was perfectly suited towards the fatty, savory pork belly.  It really was the first pork belly dish in a very long time to warrant any attention past stuffing it down with a pint. 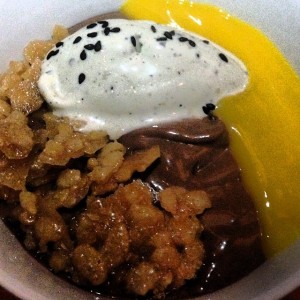 Their mains seem like they were scaled-up versions of apps, but are no worse for the transition.  Dishes like their Four-Cup Chicken, a kind of Asian/Euro fusion of vegetable stuffed breast rolls, on a taro purée and thinly sliced wood-ear mushrooms, are always complex and well executed enough to stay interesting the whole way through.

Even something that can be at first off-putting, like a Douglas Fir smoked NY strip steak, can end up being a pretty original and fun dish.  The smoke ends up just being a kind of herbal or resinous background note, not as overbearing as one would fear.

The desserts are a matter of some acclaim for Aviary, and they are admittedly a good experience.  Chocolate pudding, a dish becoming quite rare at places like this, is made from scratch in a very telling way.  It’s a far cry from any kind of slick, slimy kids treat, and made quite delicious with the addition of black sesame ice cream, mango puree, and crispy candied rice.  While the rice helped keep the dish from becoming a completely homogenous texture, it was still a bit like eating (rather high-end) jaw surgery food.  This dish needs something to raise it into the rest of the menu’s tier of quality.

Aviary is not without flaws, but definitely rich in enough world-class food to more than make up for them.  Hell, they could be serving their small plates in a crack house and it would still be worth a trip.  Aviary survived a fire and four years in a very competitive and fine-dining resistant environment, and it’s because of dishes like their Cauliflower Flan, their Four-Cup Chicken, that just put themselves so head and shoulders above almost all their contemporaries.