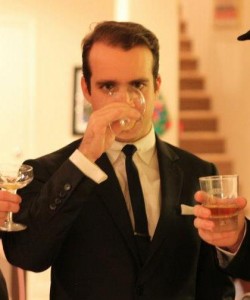 If you haven’t tried anything from Dogfish Head’s Ancient Ale series, go do it now.  It’s really quite something, the way they take these recipes that are hundreds or thousands of years old, either from Egyptians or Mesopotamians, or in the case of this beer, 9th Century Finnish honest-to-goodness Vikings.  Now if there is one ancient culture that was mad cool in almost every way, it was vikings.  Heck, a King around the time they were brewing this beer was Erik Bloodaxe.  Has there ever been a King with a cooler name?  It makes Richard the Lion-Hearted sound about as cool as Barney the Dinosaur.  Do you want to drink a thousand-year-old style that Good King Bloodaxe drank?  You bet the mighty hammer of Thor (Mjolnir) you would.

Traditionally, the ancient Finnish ale Sahti is brewed with junniper berries and is a strong, yeasty kind of ale.  Dogfish actually collaborated with a Finnish brewery to get juniper berries foraged right from the countryside.  The wort itself is caramelized with burning hot river stones thrown right in.  The historical accuracy kind of ends there, as Sah’Tea also includes tea and spices found in a Chai tea blend.  Black tea, cardamom, cinnamon, ginger, cloves, and black pepper all spice this bad boy up to 11 and balance it against the bitter hops and juniper.  Frankly, it sounds fantastic.  I had high hopes going into this one, as Dogfish Head rarely disappoints.

Anyone who knows the story of the owner and brewmasters there knows that they have a real passion for experimentation.  So much so that they made one of the biggest barrels in the world, out of one of the hardest woods in the world, Holy Wood.  The resinous and aromatic container is a 1400 cubic foot Goliath, incredibly heavy, dulled several saw blades in it’s production, and cost $140,000.  Their Palo Santo Marron comes out of that one.

Note that I had Sah’Tea on tap, but word has it that it’s not so different from bottled.  It weighs in at 9%ABV, which is golden in my book.  Certainly won’t leave me ‘wanting’.  It poured a slightly hazy golden yellow, with a slow settling head.  Just the nose of it was one of the more complex ones I’ve had the pleasure of, getting all sorts of banana esters, tea, and plenty of spice.  I swear I could just breathe this one in and be content.  A very exited first sip revealed to me a sweet, silky mouthfeel and a touch of citrus, like candied orange peel.  It ended with a bit of aromatic tea and juniper bitter, almost like a good gin.  Not nearly as ‘knock you on your feet’ powerful, just kind of a strong hint.