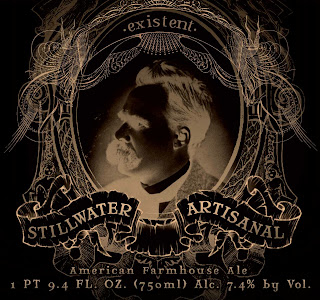 “HOW MUCH BEER IS IN GERMAN INTELLIGENCE?” – FRIEDRICH NIETZSCHE

How did I choose this beer?  Well, in an aisle full of dragons and dogs and clowns and whatever else people put on their bottles these days, there was one that didn’t quite fit the mold.  It instead was blazened with the face of 1800s German philosopher Friedrick Nietzsche, captioned with the beer’s name, “Existent”.  His mustachioed visage reminded me that I have a philosophy major girlfriend at home, and this could be a fun treat for the both of us.  She is more of a Jean-Paul Sartre fan, but I didn’t see any bottles with him on it.  However, I suppose I could have made a Sartre beer by watering down the Nietzsche.  I’ll just go ahead and high-five myself for that wicked philosophy burn.

Stillwater Artisanal Ales was not a brewery I was very familiar with.  Maryland isn’t exactly known for their beer, but this is one lineup of beers that can really turn your head from the crab cakes and John Waters films.  Every beer on their list is something really unique and interesting, and they even have a collaboration with Mikkeller.
Existent in particular is an American farmhouse ale, explained on their website as “Deep and dark, though deceptively dry, braced by a firm but smooth bitterness and accented with an earthy hop and mild roast aroma.”  Interesting, but I thought a farmhouse ale or saison was a light summery beer?  Well, that does seem to be the general idea, but saisons are just not that well defined.  The description on the website does indeed end with such a sentiment, “This is an ale for you to define, ‘and if you gaze for long into an abyss, the abyss gazes also into you’ – Friedrich Nietzsche.”  Chilling.
At first pour, I was absolutely taken aback with how dark it was.  I mean, I know it said it was a dark farmhouse ale, but this is right in porter territory.  It riles up quite the dark head as well, almost coffee colored.  When you get a whiff of it, you can start to see the saison qualities come out.  There is just a bit of a tart fruit scent from the Belgian yeasty funk.  Plenty of those toasty malts, and just a bit of hops too.  It’s good to see the hops come out in the scent, as long as they do not overpower in the beer itself.  Either way, an interesting scent overall.
The taste was a real treat.  The first thing I noticed was just how well balanced it was.  The malts set off the hops perfectly, all complimented by the yeast and spicy characteristics.  Truly a hallmark of a good beer.  After a few tastes, I was getting notes of orange peel and peppercorn, with a bitter chocolate aftertaste.  Some really interesting things going on in this beer, that is for sure.  It finishes just as strong as it ends, which is a little taxing if you are not up for it.  Personally, it was just fine split a little over two ways (gave a tulip glass to my roommate), but I couldn’t see myself drinking any more than that in one sitting.  Not for the 7.4% ABV obviously, but just the overbearing experience it is.  It is great, no doubt about that, but I can only enjoy something good for so long before I need a break.
Stillwater also does a version of this that they age in bourbon barrels in 12oz bottles.  Now that would be a really interesting addition to this.  Not only would they be improving the flavor, but they would be rationing it out in more bite-sized chunks.  It would also seem that this un-aged Existent could use a bit of a fuller-bodied oak or bourbon vanilla sweetness.  If I ever see a bottle, I’ll be sure to gaze into this abyss once more
Scroll to top