The idea that Red Wine is good for you just got yet another validation.  A new study found  drinking red wine in moderation may reduce one of the risk factors for breast cancer, providing a natural weapon to combat a major cause of death among U.S. women, new research from Cedars-Sinai Medical Center shows. 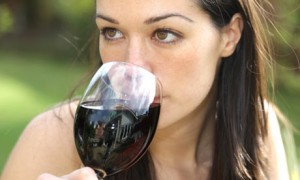 The study, published online in the Journal of Women’s Health, challenges the widely-held belief that all types of alcohol consumption heighten the risk of developing breast cancer. Doctors long have determined that alcohol increases the body’s estrogen levels, fostering the growth of cancer cells.

But the Cedars-Sinai study found that chemicals in the skins and seeds of red grapes slightly lowered estrogen levels while elevating testosterone among premenopausal women who drank eight ounces of red wine nightly for about a month.  White wine lacked the same effect.

“If you were to have a glass of wine with dinner, you may want to consider a glass of red,” said Chrisandra Shufelt, MD, assistant director of the Women’s Heart Center at the Cedars-Sinai Heart Institute and one of the study’s co-authors.  “Switching may shift your risk.”

Shufelt noted that breast cancer is the leading type of women’s cancer in the U.S., accounting for more than 230,000 new cases last year, or 30 percent of all female cancer diagnoses. An estimated 39,000 women died from the disease in 2011, according to the American Cancer Society.

In the Cedars-Sinai study, 36 women were randomized to drink either Cabernet Sauvignon or Chardonnay daily for almost a month, then switched to the other type of wine. Blood was collected twice each month to measure hormone levels.

Investigators said the change in hormone patterns suggested that red wine may stem the growth of cancer cells, as has been shown in test tube studies. 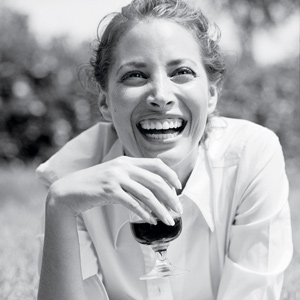 Co-author Glenn D. Braunstein, MD, said the results do not mean that white wine increases the risk of breast cancer but that grapes used in those varieties may lack the same protective elements found in reds.

“There are chemicals in red grape skin and red grape seeds that are not found in white grapes that may decrease breast cancer risk,” said Braunstein, vice president for Clinical Innovation and the James R. Klinenberg, MD, Chair in Medicine.

The study will be published in the April print edition of the Journal of Women’s Health, but Braunstein noted that large-scale studies still are needed to evaluate the safety and effectiveness of red wine to see if it specifically alters breast cancer risk.  He cautioned that recent epidemiological data indicated that even moderate amounts of alcohol intake may generally increase the risk of breast cancer in women. Until larger studies are done, he said, he would not recommend that a non-drinker begin to drink red wine.

The research team also included C. Noel Bairey Merz, MD, director of the Women’s Heart Center, director of the Preventive and Rehabilitative Cardiac Center and the Women’s Guild Chair in Women’s Health, as well as researchers from the University of Southern California Keck School of Medicine and Hartford Hospital in Connecticut.

The bottom line is that red wine is good for you and has been proven to have yet another benefit when enjoyed in moderation. The old saying a “spoon full of sugar helps the medicine go down” just got even better when you enjoy a glass of red wine and drink to your health .

National Seafood Month Reflects On The Abundance Of The Ocean And Its Sustainability For The Future
The First Central Coast Oyster Festival Showcases Bounty From The Land and Sea.
October is National Seafood Month , a perfect opportunity to pair the Bounty of the Sea with Great Wines
Easy to Make Shepherd's Pie With Thanksgiving Leftovers From The Cuisineist Test Kitchen
Another Michelin Chef joins the list of Las Vegas Allstar Chefs. Gordon Ramsay Steak at Paris Las Vegas Opens Friday, May 11 2012
CELEBRATE EASTER AT THE WESTIN ST. FRANCIS SAN FRANCISCO
Editors Take An An Epic Journey of Coastal Discovery along California’s Highway 1 Discovery Route and The country’s first Stewardship Travel program Is a Sojourn of A Life Time.
The World’s Best Wines Come To New York March 2-4th For The 5Th Annual New York Wine Expo

La Strada del Vino Terre di Arezzo provides A Tuscan Luxury Destination To ... Quality Wines From Muga Wine Cellars In Rioja Show Why They Have Been Making...
Scroll to top