It’s the holiday season and gift-giving is all the rage. This year give something special and unique. Drawing inspiration from ten generations of winegrowers and cognac makers in the heart of the Grande Champagne, Premier Cru de Cognac, Ferrand Cognac is a place where passion reign. For 32 years, owner and Master Blender Alexandre Gabriel has been an inveterate experimenter, from the grape varietals he features in the Ferrand Cognac range to the casks used in the brand’s aging process. Today, the Ferrand family legacy – and its resurrection as the foundation of the Ferrand Cognac collection of award-winning spirits. 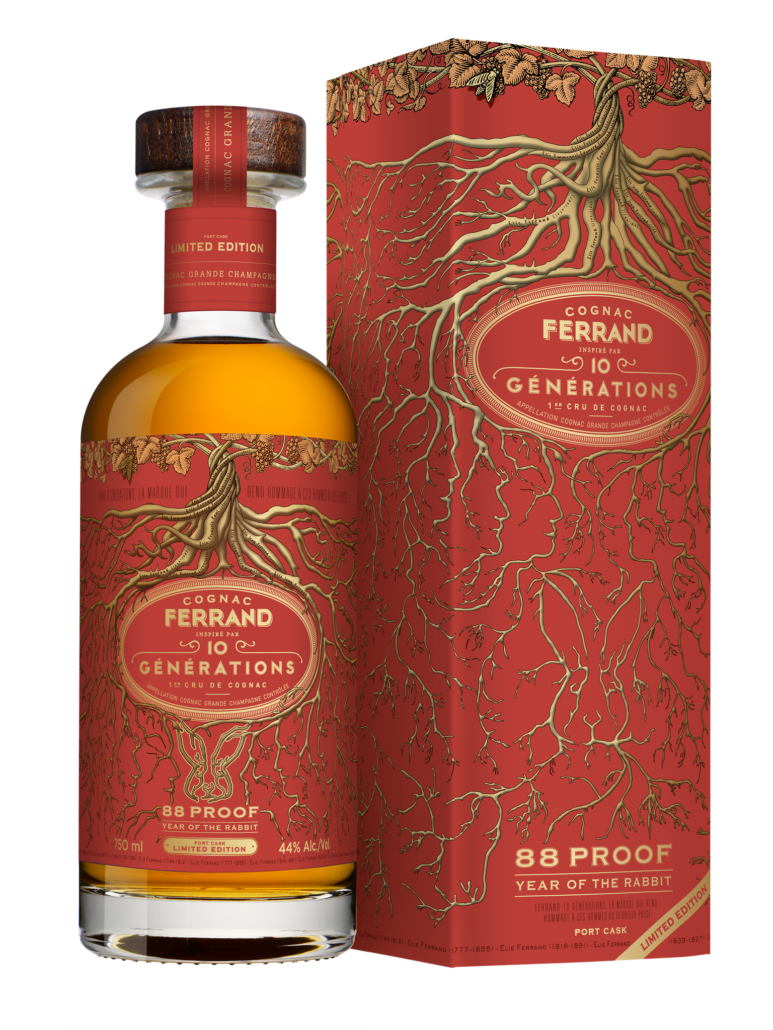 Alexandre Gabriel and Maison Ferrand, proprietors of a historic estate and spiritual heirs of a Cognac legacy of 10 generations, introduce the limited edition Ferrand Cognac 10 Générations Port Cask Year of the Rabbit, created in celebration of the Chinese New Year 2023 – The Year of the Rabbit – which can be seen in the roots of the label. This double-matured Premier Cru de Cognac also pays tribute to 10 generations of Ferrand’s for whom a great cognac was above all the fruit of patient work on a great terroir.

Available in select U.S. markets beginning in December 2022, Ferrand Cognac 10 Générations Port Cask Year of the Rabbit is bottled at 44% alcohol by volume (88 proof) with a suggested retail price of $64.99 for a 750ml bottle. Only 12,000 bottles of this limited-edition cognac have been produced.

10 Générations Port Cask is a Grande Champagne Cognac made from a single variety of grape, the Ugni Blanc. It is a rich and round cognac, with a creamy texture and pastry notes. This distinctive cognac is double distilled in copper pot stills with medium lees. The presence of lees enables the production of a richer aromatic palette and adds complexity to the floral and fruity base of the Ugni Blanc grape. It is then double-aged, first in French oak casks. A second aging then occurs in Port wine casks, contributing notes of vanilla, honey, and cinnamon to the final liquid and resulting in an ABV increased to 88 proof, a nod to the number 8 – the luckiest number in China.

The Ferrands have been present in Segonzac, in Charente, since the 15th century. They belong to one of the oldest families of this area called Campania by the Romans and, later, Champagne and more precisely, Grande Champagne, to designate the vineyards around Segonzac.

The first of the main branch of Ferrands was named Elie. All his male descendants were named Elie, followed by a middle name, through 10 generations. The first Elie was born in the village of Chez Barraud, in Segonzac, which was to become the family stronghold. This was the era of the invention of double distillation, which enabled the production of a better quality of brandy: cognac. All the Ferrands were farmers, wine growers, men of character, Protestants, connected to the earth, and lived in the heart of Grande Champagne. From generation to generation, they passed on their knowledge to produce high-quality cognacs.

During the prosperous years of the 1860s, Elie Ferrand VII, born in 1816, built a manor house on the family land at Chez Barraud and made it his residence. Elie Ferrand VIII (1839-1927) also lived in this house, dedicating his life, among other pursuits, to producing the best cognac in Grande Champagne. Recognized by his peers, Elie attained a level of quality close to perfection, thanks to his knowledge of the soil, his in-depth study of the techniques of distillation, and numerous experiments with cognac aging in various wood species, such as chestnut. Luckily, several centuries of archives and detailed documents remained in the family manor, owned today by the Maison Ferrand.

In 1872, Elie Ferrand VIII went to Porto for the first time in his life – the first of several journeys – where he discovered their magnificent, fortified wine. A great collector, Elie had a habit of bringing back souvenirs from his voyages, which is why he brought back several casks of port wine from Portugal. As a cognac producer, Elie enjoyed experimenting with different finishes and was intrigued by adding natural sweetness to his cognac, with a finish in the port casks he had just brought home from his travels. Unfortunately, those experimentations and their records were lost over the years, so Alexandre Gabriel decided to finish what Elie Ferrand VIII started in the 19th century.

Shake the Port wine, 10 Générations Port Cask cognac, egg yolk and powdered sugar with ice cubes. Pour into a glass, straining the remaining ice into the shaker. Sprinkle the cocktail with nutmeg. Garnish with lemon or orange peel. (May also be served hot by pre-heating the Port wine and cognac).

On the nose, It all starts with a pastry profile of vanilla, caramel, almond, apricot, and coconut caramel, evolving on rose, orange blossom, and nutmeg. The palate is rich, round, and full,  followed by a  creamy texture of white chocolate with baked pear, vanilla, roasted chestnut, honey, and cinnamon. The finish is long and creamy with notes of figs, plum, bergamot, nutmeg, licorice, and vanilla. Make this a year to remember in your glass!

Cuisineist on Instagram and IGTV Great times and b

Great times and brilliant wines! With owner Mike A