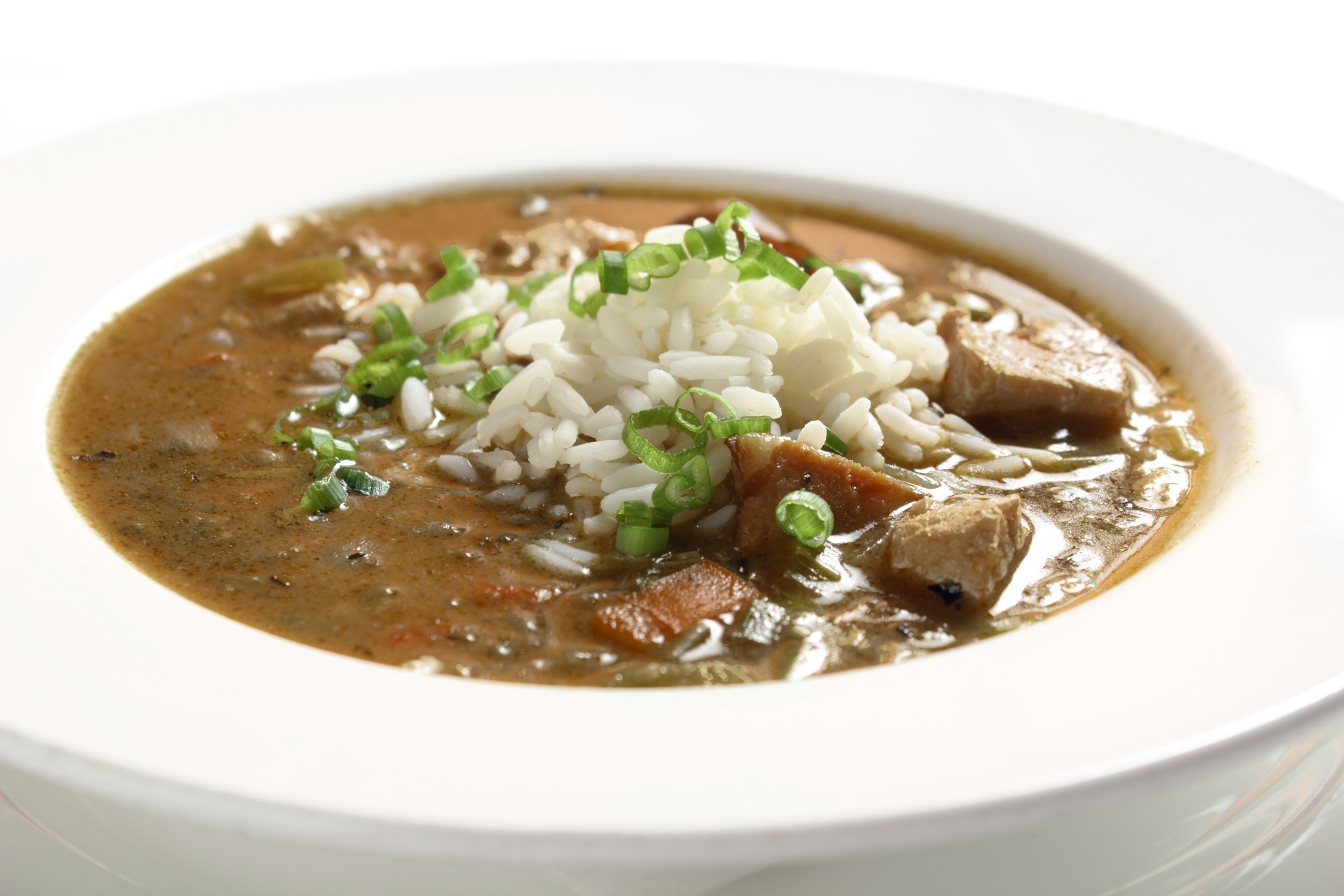 The International House Hotel in the Central District of New Orleans Louisiana is the thoughtful conception of visionary real estate developer Sean Cummings, president of ekistics, Inc; a development company that adheres to the energy and the life blood of the places that people live work and create. “People respond to the buildings because in them they discover authentic and imaginatively designed spaces that celebrate life,” said Cummings. “It is a spiritual practice for us and I think that people respond to it.”

The 117 room International House Hotel once housed the country’s first world trade center within the grand Beaux Arts landmark. Taking such an iconic property into the 21st century with an approach of the urban architectwhile maintaining historic lineage, has taken the intuitive skill set of both Cummings and celebrity designer LM Pagano and eventually attracting artisan bar director Alan Walter.

Each strives in honoring and celebrating the historical underpinnings of New Orleans rich cultural, artistic, religious and musical integrations. In an exclusive interview with Steinway and Sons, LM Pagano referred to her eclectic and discerning design work as improving, revising, inventing and reinventing. “My job as an interior designer is to make a custom recipe, sparked by one ingredient or element, then dependent conditions, quality of light, and the client’s art-you name it.” 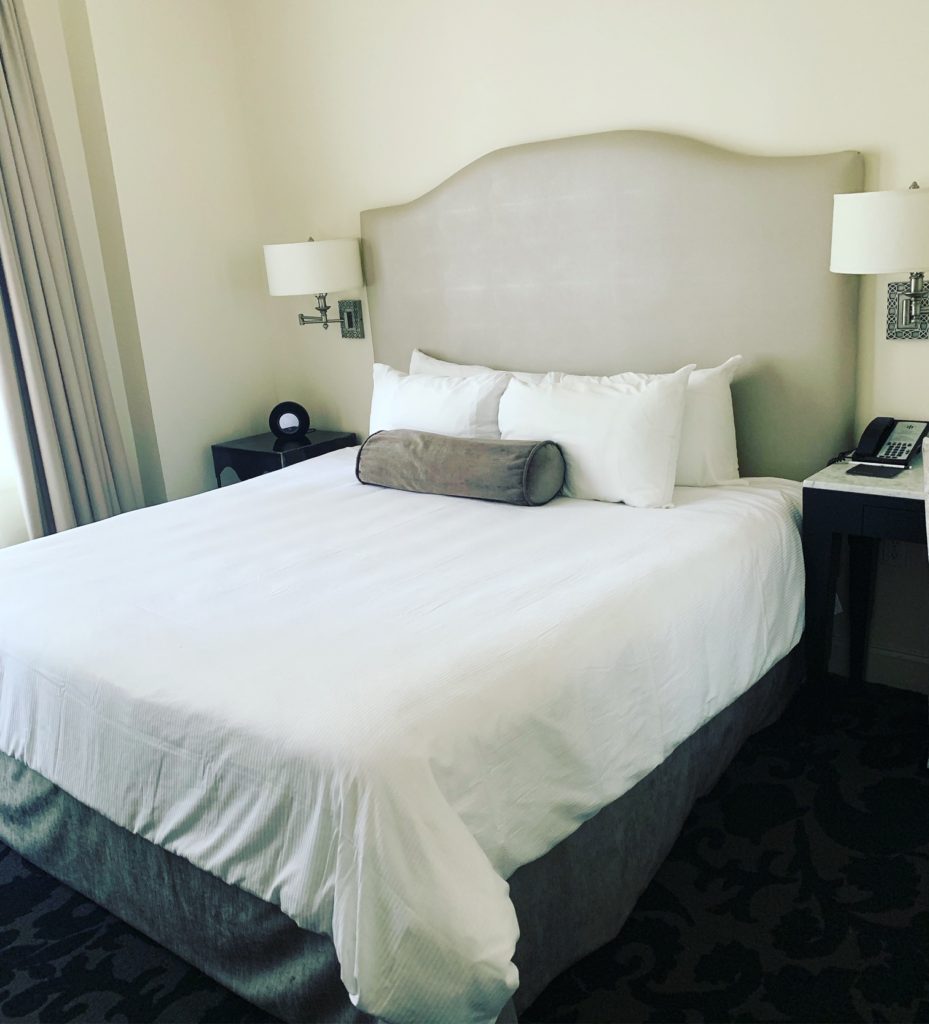 The use of carefully curate furnishings, luxurious crisp white linens and Aveda bath products lends each or the 117 rooms, suites and penthouses restorative sophistication. Pagano instills her “modernist-chateau vintage” design with intuitive flair evidenced with her exclusive “antiquese velveteen “LM chair and a half”, oversized Calcutta Gold marbled bathrooms, and mirrors ensconced with Swarovski crystals, and customized closets. 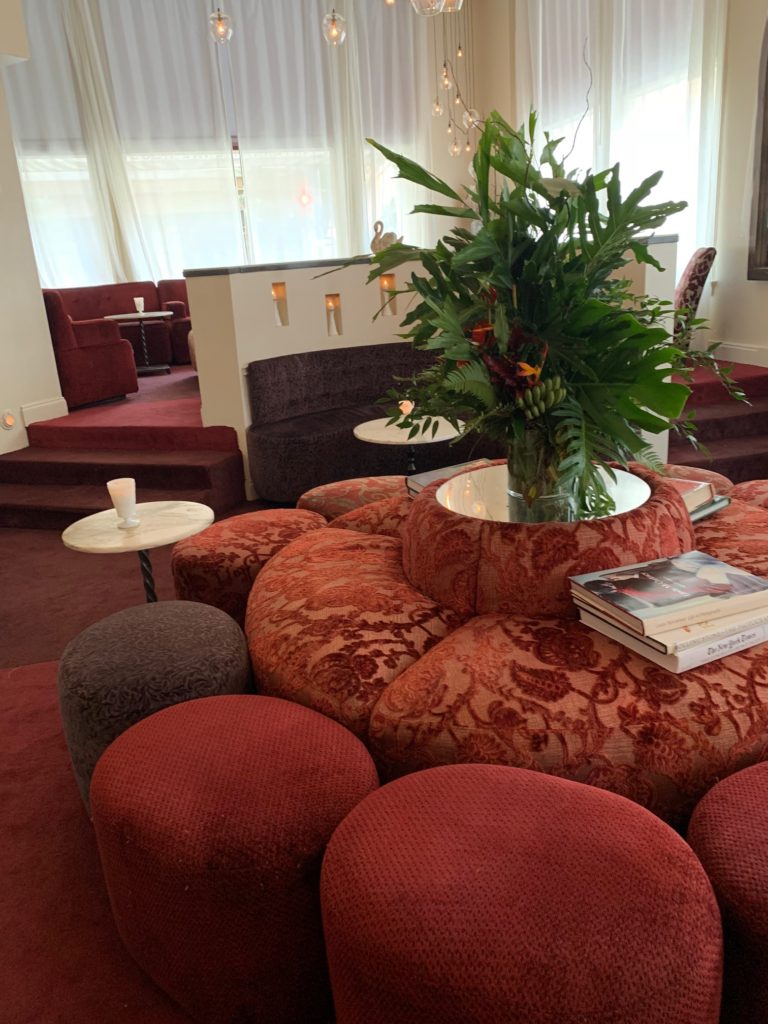 Making the connection from the physicality of the structure and those it intends to serve takes an on-going collaboration between the incredible artisans that are well entrenched in the fabric of the New Orleans community. 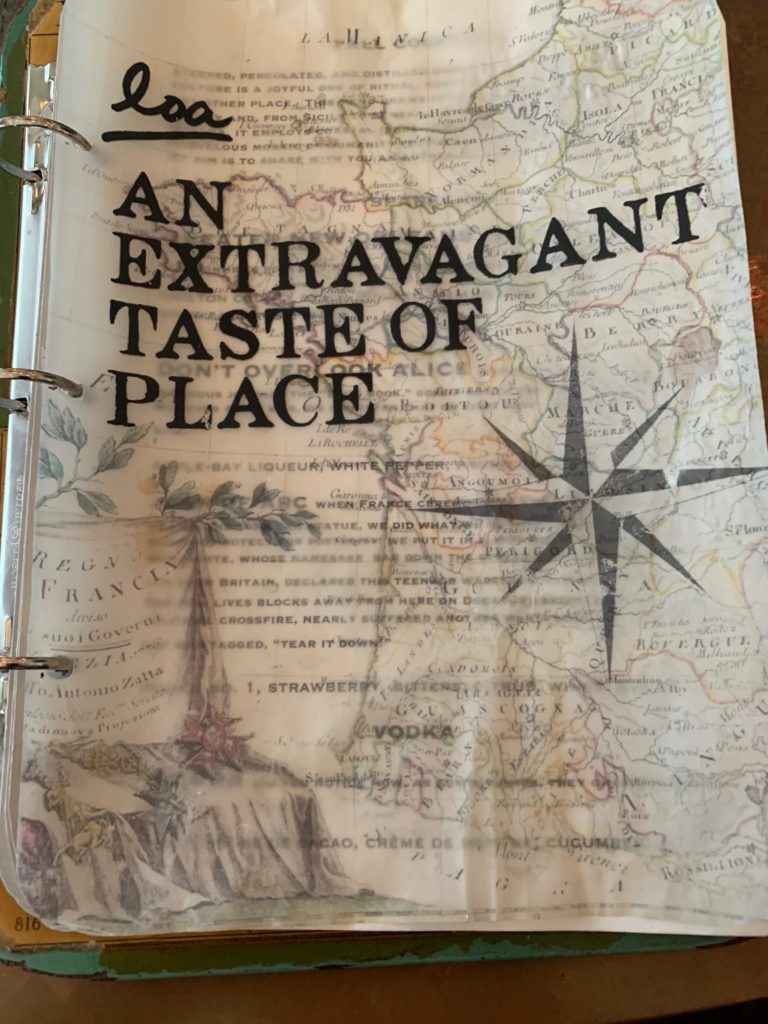 Another collaborative artisan working closely with Cummings is Alan Walter; his place of command the Hotel’s bar-Loa. He is the creative director behind the alchemic flow of alcohol that transcends from the wisdom of the ages. 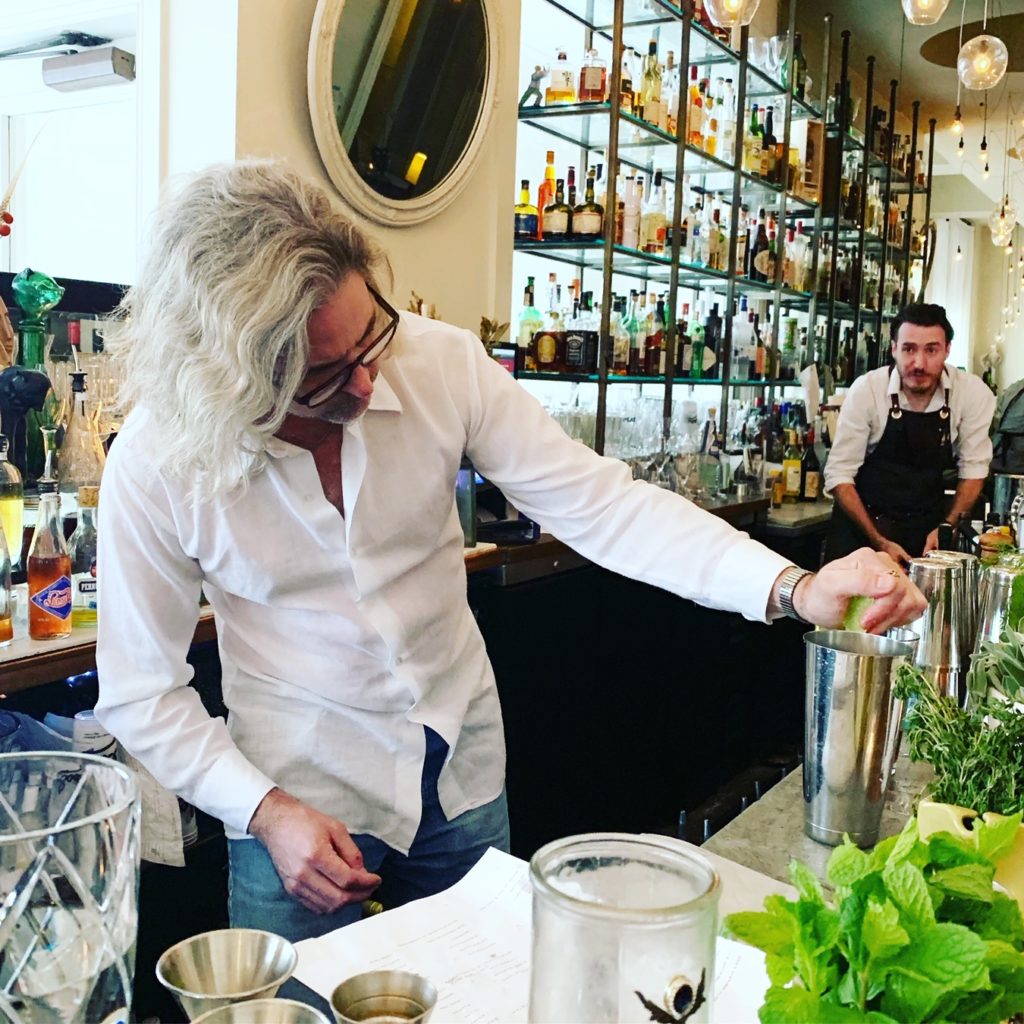 The hotel’s beloved bar, named after the divine spirits of the Voodou faith has been around for 20 years with Walter at the helm for the last 6 of those years. He is the creative director behind the a unique bat program that is inspired by local purveyors and years of training as an playwright, history buff, director, artist and avid flea market finder. Walter’s personal alchemy is interjected into the bars spirit program which adheres to Cummings original concept. 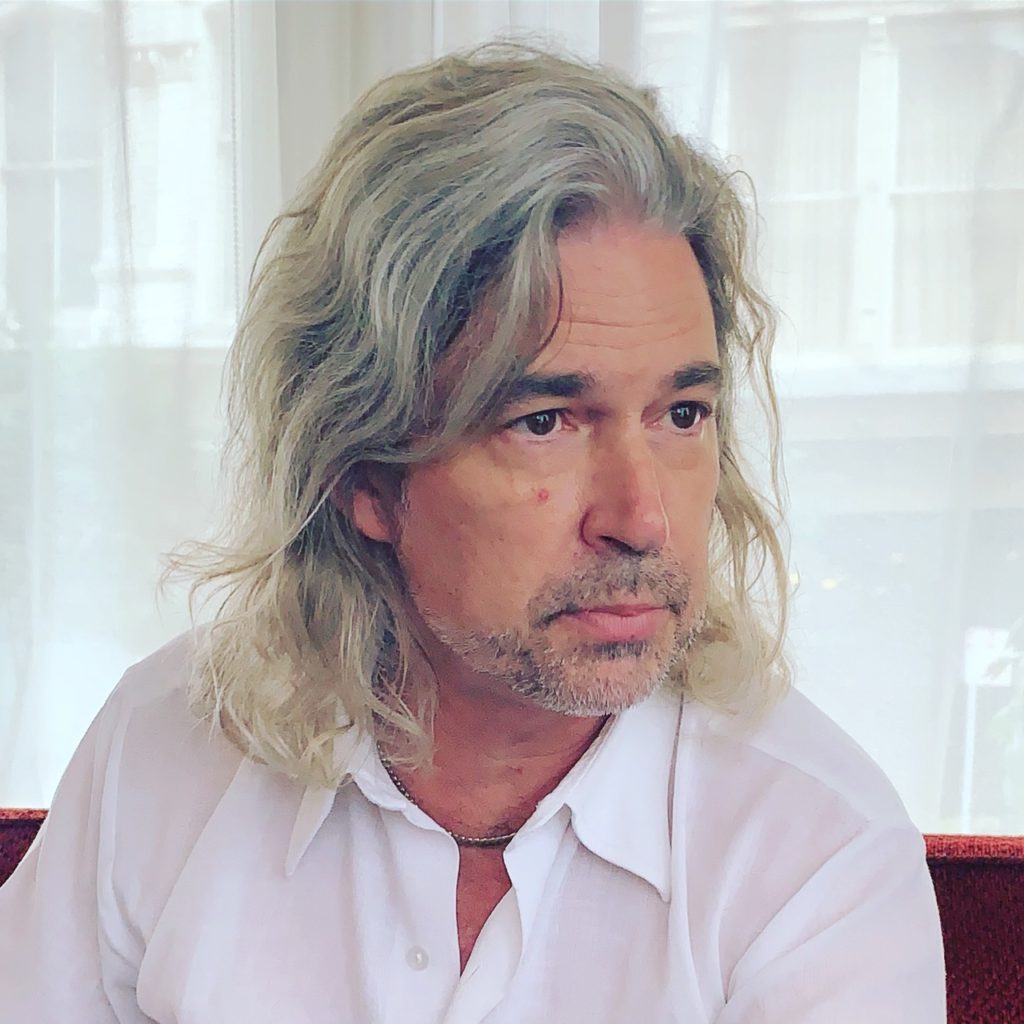 “Sean’s name for this was a good umbrella to catch; a bar that would nod to these traditions in New Orleans not necessarily Voodoo or African, Haitian traditions, “said Walter. “In a playful way it is a bar that uses spirits to evoke spirits or essences. We play the game in a serious way here. The cocktails in New Orleans are woven into the culture here. They are woven thread by thread into the significant things that people do here; they are right there as little markers of birth death, weddings and business deals.” 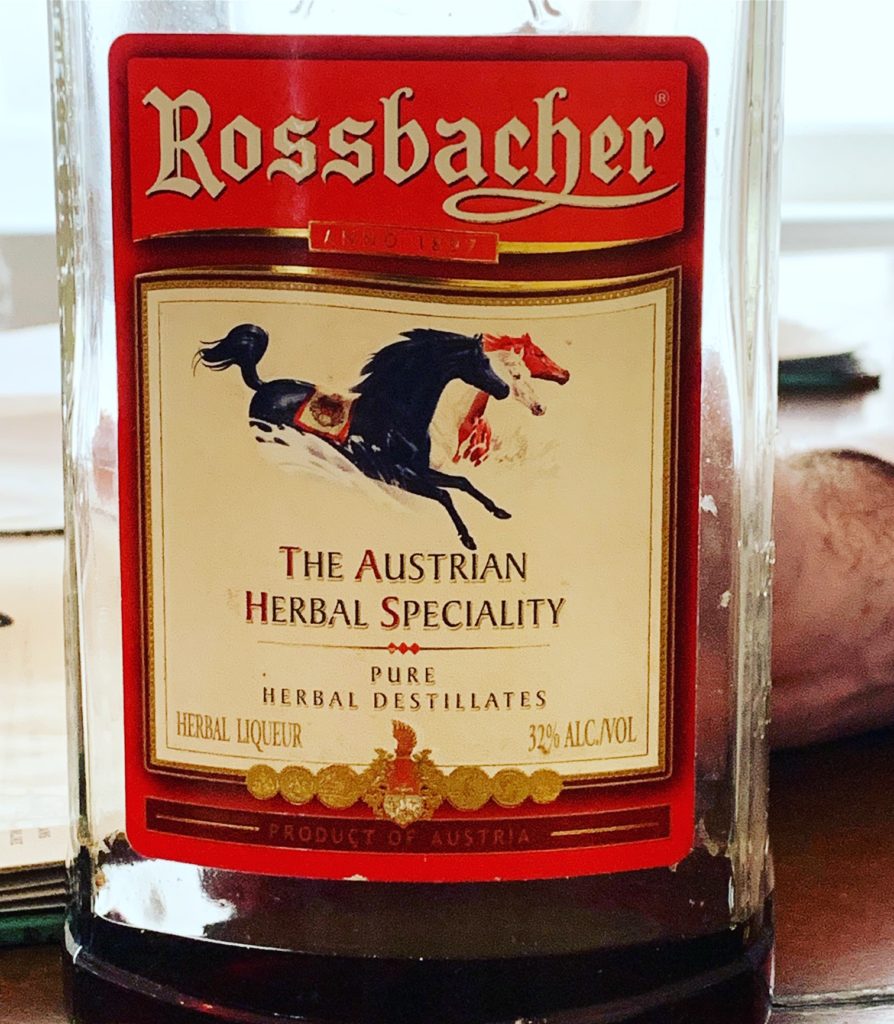 “Loa tries to evoke the New Orleans story in a playful way almost as a sort of guide to these ingredients that are used in our food and culture but are used in context of drinks sometimes in unusual way or the classics,” continued Walter.

His alchemic blends and “potions” come from these farmers and forest foragers. With local honey, fresh fruit and carefully procured herbs, Walter muddles, infuses, and creates teas, tinctures and syrups that yield uniquely regional flavors for his drinks. “The personal nature of the Farmers market or a humble purveyor is a real precious connection to the city,” added Walter. “In my own modest way, but definitely in the hand or our chefs here, there is an artistry and expression of this place.” 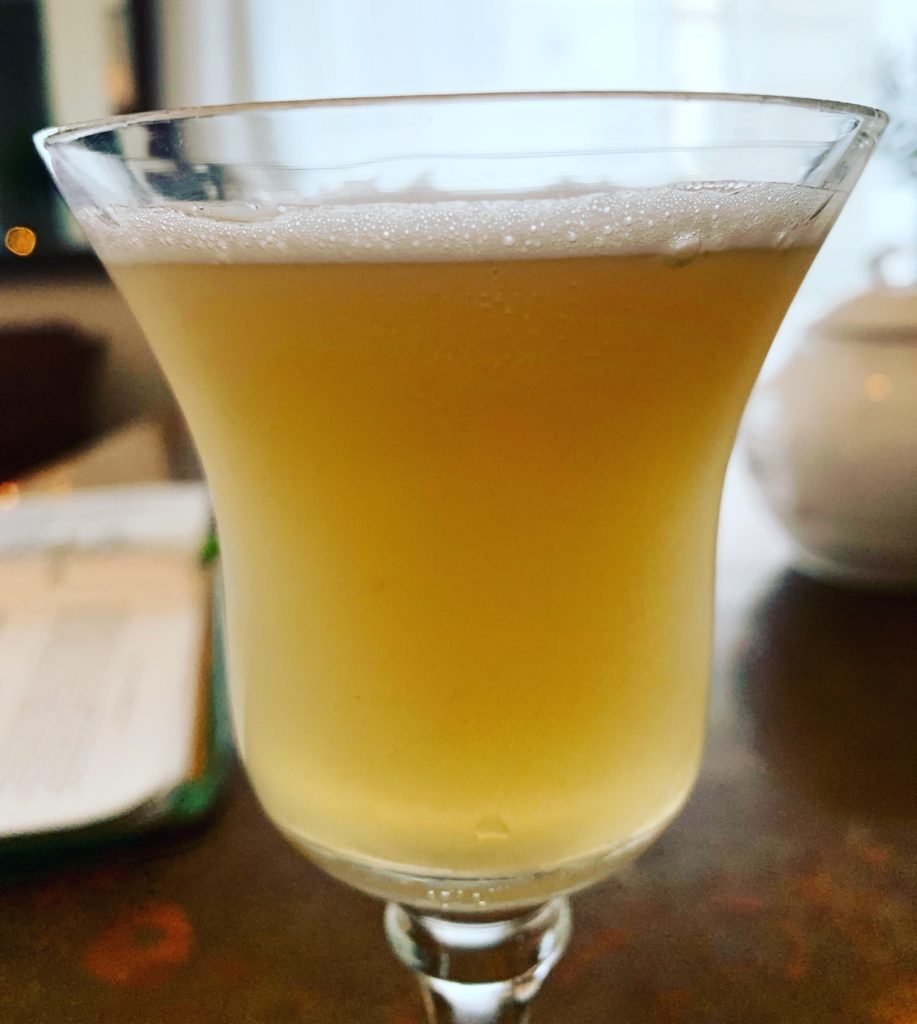 Walters’s obsession with era glassware is clearly seen as a variety of vintage receptacles line the back bar and appear to glow among the many votive candles that burn on his “alter” to alcohol alchemy. This is the realm where Walter astutely delivers a Loa libation that he hopes will transform the receiver into a believer with a nod to history. He aims to make the Loa experience one to share with others and his cocktail list filled with whimsical preparations and antidotal humor. Walter believes that his stories help anchor the cocktail as in “Don’t Overlook Alice”, named after Storyville’s infamous “Blue book” composed of, Apple bay liquor, white pepper and prosecco was fashioned for inspirational imbibing. 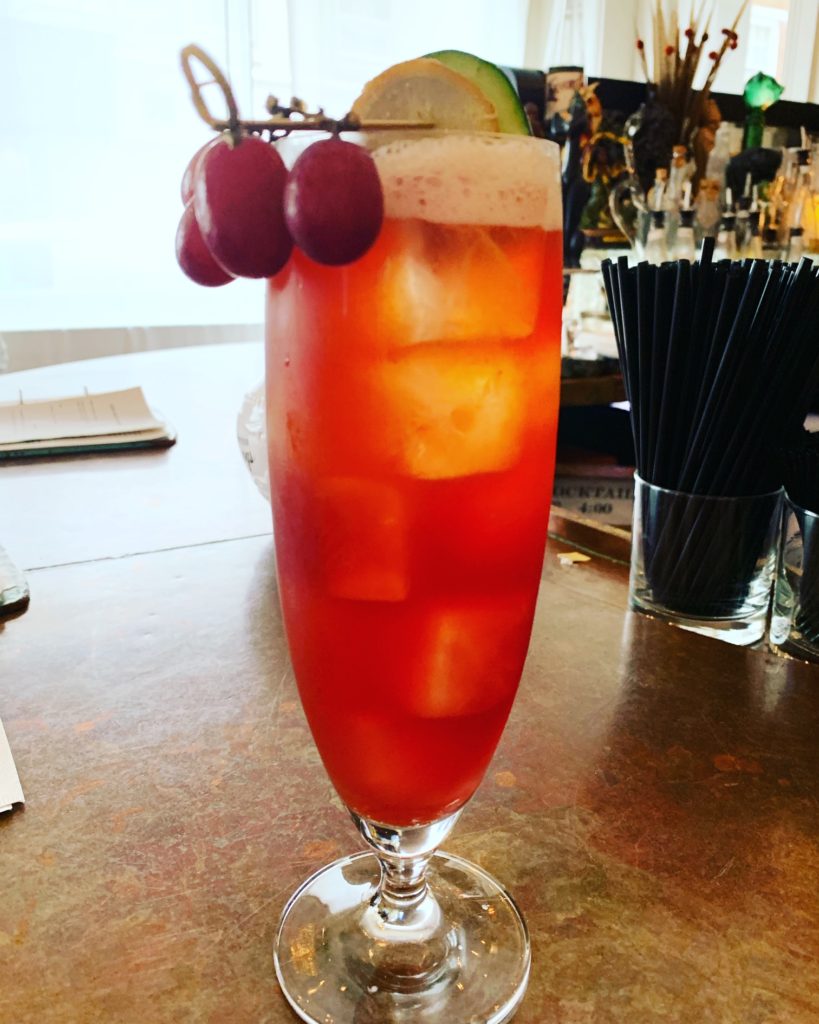 A Sip on the Jean LaFitte that arrives in an amoeba-shaped tinted glass saucer edged with Fennel and powdered lime, or the Haitian Sazerac, a nod to the original native Haitian pharmacists bitters that infuse this classic cocktail with a bit of New Orleans history; they are more than cocktails they are liquid stories worth repeating.

Sean Cummings, Alan Walter, and LM Pagano’s spiritual aspects may be found in the intention and the energy behind all of their creations. Sharing their knowledge, expertise and vision for hospitality on levels has been their on-going mission. The International House and all its facets; in the furnishings, the cocktails, and in helping guests connect on a deeper level are a reflection of two decades of reinventing and reassembling the traditions of a city that calls out to live life to the fullest.

Houmas House Estate and Gardens is the place to stay, dine and discover the Sugar Baron’s South. 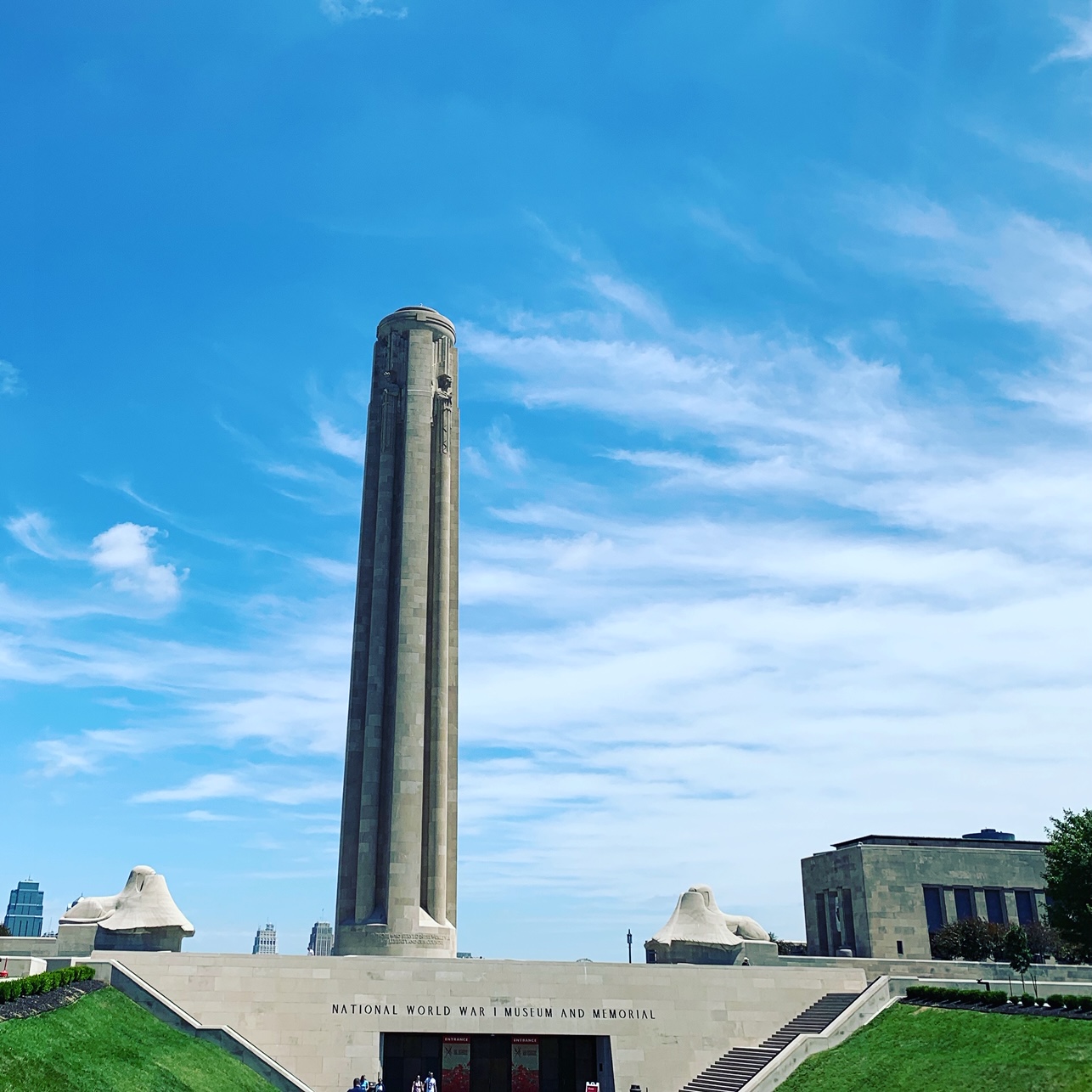 Kansas City Missouri Provides Many Pleasant Surprises For All to Enjoy. 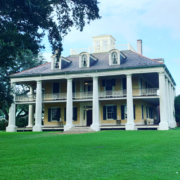 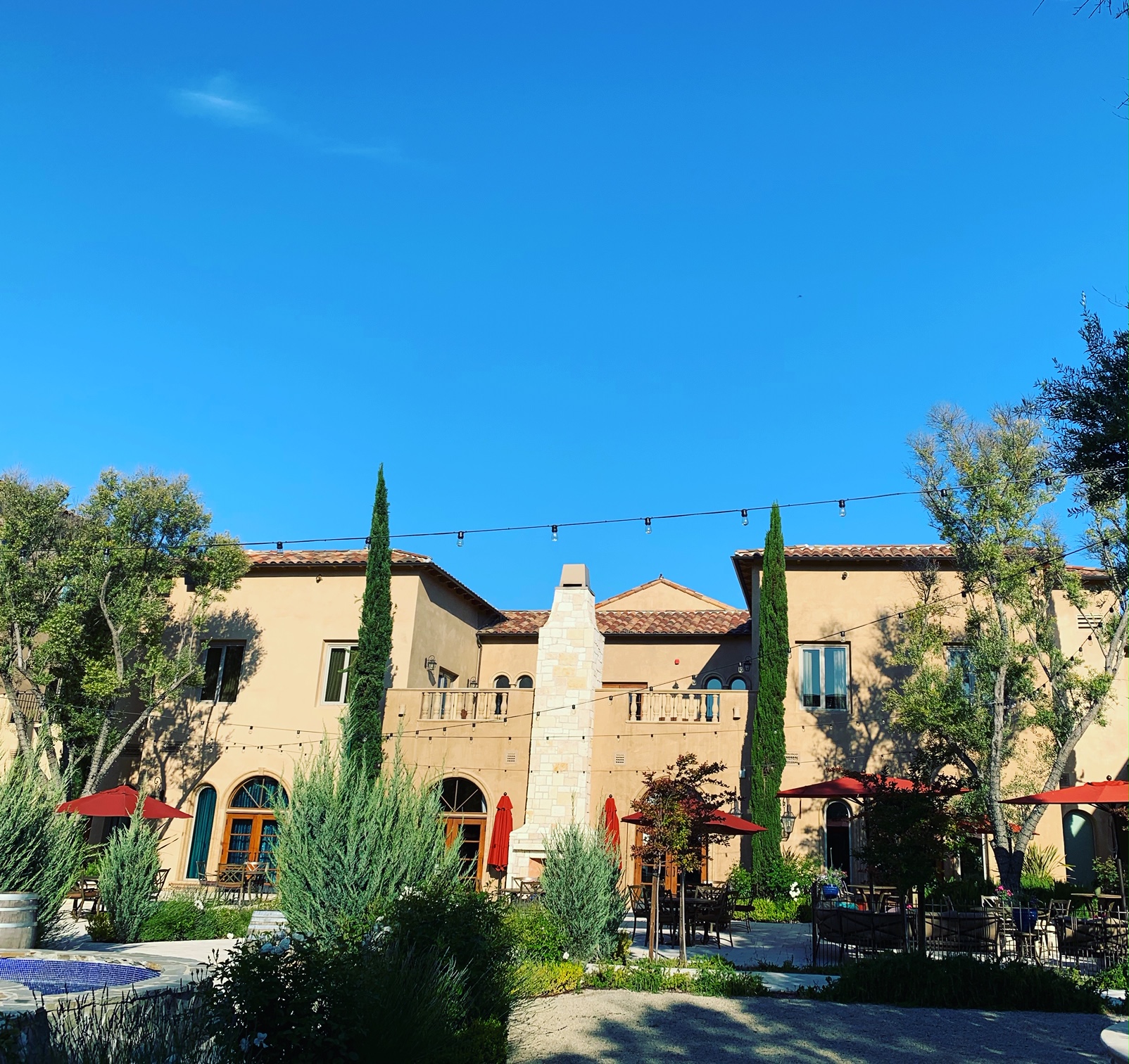 So happy with the skin!! 2 hour Spatchcock Chicken

So moist! a 2 hour Spatchcock Chicken! On Hickory

All Rubbed Down! 2 hour Spatchcock Chicken! On Hic

We have been asked many times to experience Brunch

Decadent, Rich,creamy Flan.. We have been asked ma

Personalized and handmade! We have been asked many

Service excellence here.. We have been asked many

Green card on the table! Lets go!!! We have been a

Fresh as it can get! Nice Start! We have been aske

We have been asked many times to experience Brunch

Just had to try out the Traeger with a Smoked Wild

After class mingling! VinoLasVegasWineClub.com and

Fun times with Our a Yorkshire terrier in-laws!! .

Another fun time!! See you in July for my next Sip

Very proud guests!!VinoLasVegasWineClub.com and be

Everyone is working so hard!! VinoLasVegasWineClub

Houmas House Estate and Gardens is the place to stay, dine and discover the...
Scroll to top