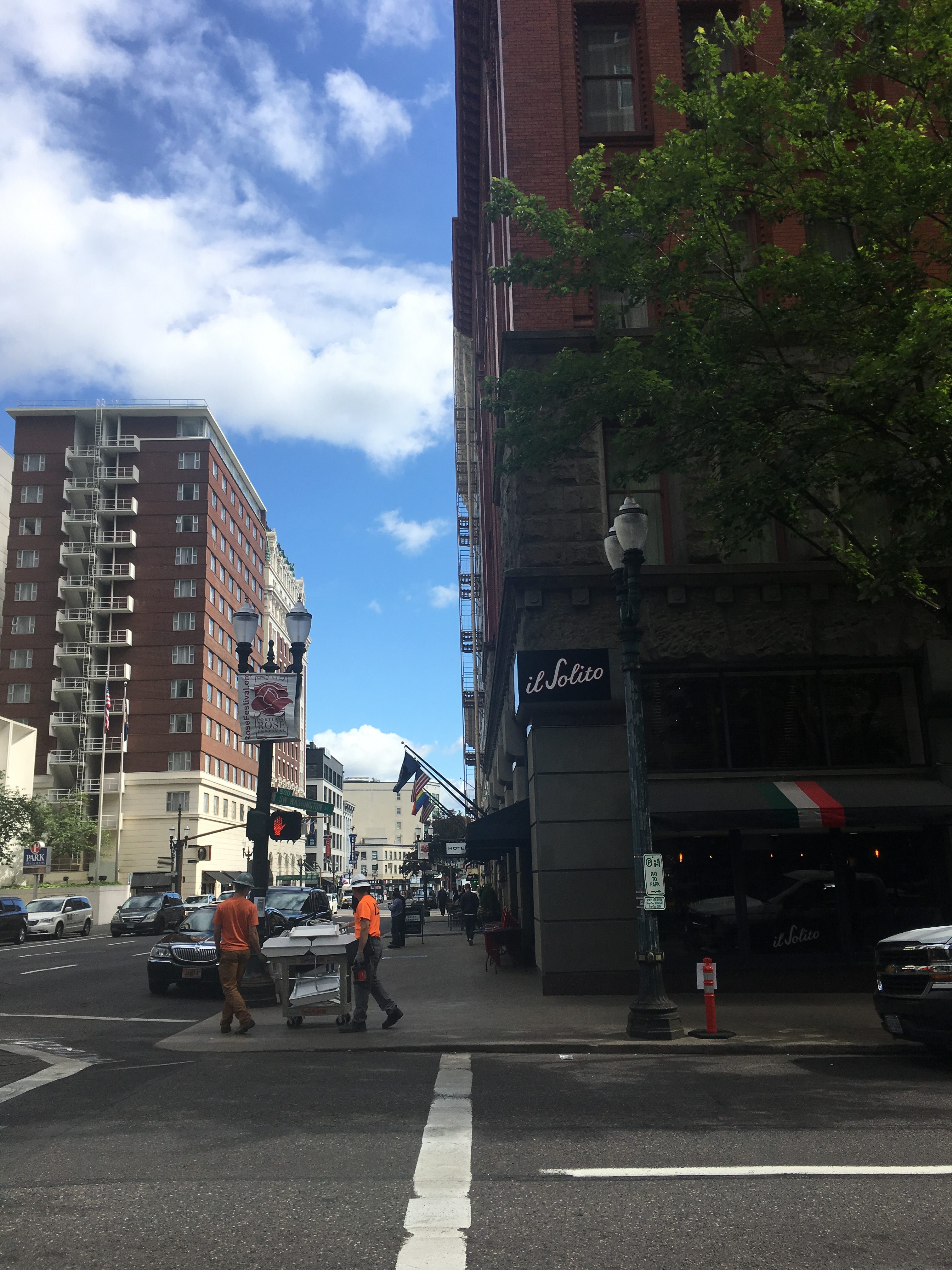 Many of the airports in America are rather sterile and predictable but landing in Portland from Las Vegas we walked into the terminal to the soulful sounds of a guitar playing troubadour. Coffee aromas wafted through the air vents as we made our way alongside an impressive wine bar and coffee shop that stretched the entire length of the bustling corridor. We finally settled into our rental car and sped into the cloud shrouded day; the verdant landscape a refreshing reprieve from the desert heat. 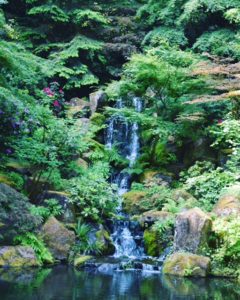 Actor Kenneth Choi said,” Portland is the perfect weekend getaway.” We were about to find out that Portland is indeed a great stepping off point to an excellent weekend retreat. Navigating our way to the Kimpton’s Hotel Vintage Portland, we immediately concurred that motorist and bicyclist carefully co-exist in this obviously bike friendly town.

The city appeared punctuated with coffee shops, ethnic food carts, trendy clothing boutiques, vintage bookstores and lots of old growth trees interspersed between historic buildings. We felt a relaxed sensibility as we pulled into the valet eager to explore the city known as Stumptown, PDX, City of Roses and our favorite, Beervana. 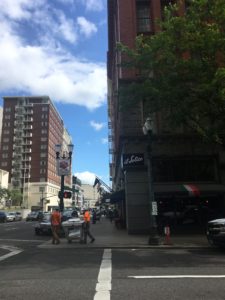 The Hotel Vintage Portland is housed in a refurbished turn of the century building complete with lots of exposed bricks and stately windows. This hotel’s boutique experience emphasizes wine drinking which is embrace and encouraged. Nightly wine tastings often led by a local vintner and yummy small bites from Il Solito, the hotel’s full service Italian restaurant and bar are popular with tourist and locals alike. 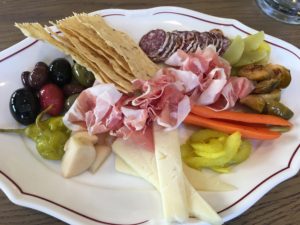 Our room granted us a welcome respite with plush retro furnishings: a lipstick red couch lounger, luxury bedding and in the restroom, a bit of whimsy as a graphical mime peered longingly onto our behemoth soaking tub. Once settled we immediately embarked into the weird and wonderful world of Portland.www.HotelVintage-Portland.com 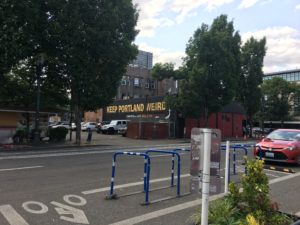 Since we arrived early in the day, we ventured into one of the many competing coffee shops. A made to order veggie omelet and freshly roasted coffee gives us the energy boost we need to begin our investigations. That coffee was so good, I’m seriously thinking about checking some roasted coffee out on Iron and Fire and setting up our own little coffee shop in our home, waking up to that each morning would be bliss.

High above the city lays the International Rose Test Garden and the tranquil Japanese gardens where flora and fauna meet in perfect harmony and the first leg of our 24-hour journey.

After nature gazing, Portland’s ubiquitous food carts awaited us and the man who has chronicled the advent and present food cart mania, Brett Burmeister.

Portland’s cool green climate is a reflection of fresh air via the dense plant life and abundant natural water ways. This exuberant ecosystem is especially observed at the International Rose Test Garden’s dazzling display of bountiful blossoms. Due to amicable growing conditions, roses thrive to such an extent that in 1915 city officials created a rose test garden to safely keep hybrid roses grown in Europe for fear of losing specific strains during WW1. 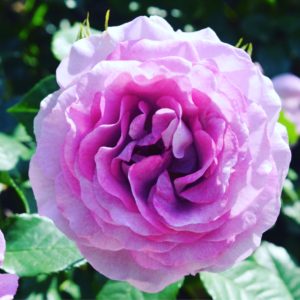 Overlooking downtown is a plot of the most colorful, perfumed beauties that have earned Portland the name “The City of Roses”. Today the garden is free for all who want to experience some of Mother Nature’s best work; the garden showcases 10,000 rose bushes of over 650 varieties.http://Portland Japanese Garden 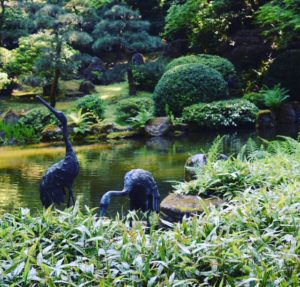 Adjacent to the test garden, the Portland Japanese Garden lauded as the one of the most authentic Japanese Gardens outside of Japan allures with peaceable beauty. Created to highlight the elements of nature, the well designed gardens, pagodas, arbors, bridges and lots of colorful koi, instantly enveloped us in a world of symbolic serenity. 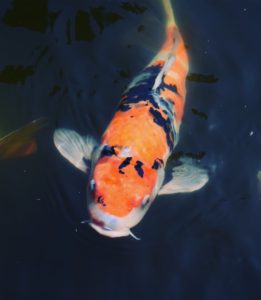 Along with the gorgeously groomed spaces, a cultural village with tea café, gallery and gift shop is available for pleasant pursuing. After several pleasant hours of communing with nature’s Zen, it was now time to meet up with the Portland’s renown Food Cart expert, Brett Burmeister. 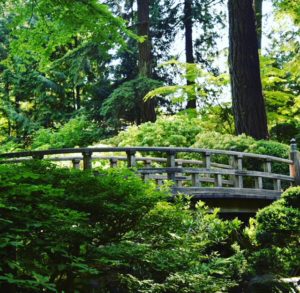 Where can one learn about the world’s international cuisines within a city block? Brett will tell you that it is through Food Carts Portland. “In the beginning this was a new generation of vendors who hit the ground running,” said Burmeister. “They were doing food that no one ever heard of before. Food that was restaurant quality but many didn’t have the means to open a brick and mortar. This has given many the means of affordable entrepreneurship.” 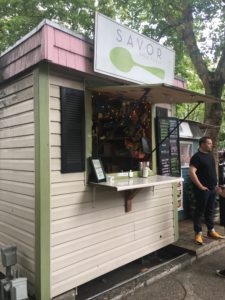 Tiny stationary snack shacks (although on wheels) are competitively cornered together in various sections of the city. Each vendor is zealous in daily capturing a hungry onlooker’s appetite and pocketbook. The Lebanese pita wrap spiced with zaatar a Middle Eastern herb blend, a soulful Hungarian soup and a flavorful steamed pork bao were just a few bites we tried at Brett’s direction. 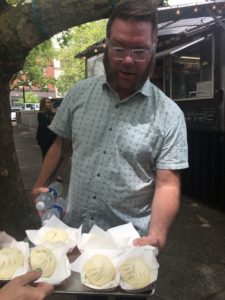 With so many selections, we felt envious that Portlanders have this unique slice of world culinary traditions and ethnic diversity within several city blocks. www.foodcartsportland.com

After the world feast, we were ready for some Beervana history. What better way to find out more about Portland than an Oregon Trail Bike and Brewery Tour at Pedal Bike Tours. We were delighted that the sun had decided to grace the fair skies, as we walked into the office to meet our affable guide, Daniel. 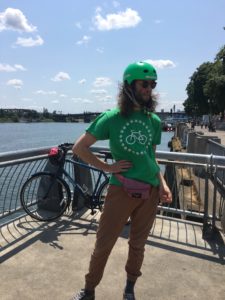 Outfitted in a Kelly green shirt adorned with a bike encircled with marijuana leaves, matching green bike helmet and a fuchsia pink fanny pack, this angular young man with the flowing curly mane and bright smile was easily identifiable as our history guide! I wanna know where he got his teeth from… well… I can only guess Dentist Alhambra! But I don’t want to ask, it’s embarrassing!

After the customary safety guidelines, we were off through the downtown area, zig zagging through a sea of skaters, runners, tourists and the occasional pan handler. 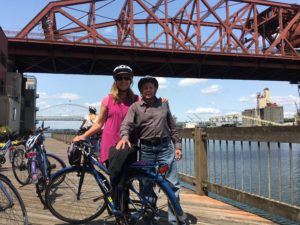 Ready to bike the beer trail.

Being home to more microbreweries than any other place on the planet, Daniel packed in as much history and drinking time into our three hour ride-about. 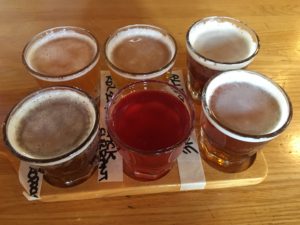 Meandering along the Willamette River, we paused for a moment to learn about various points of interest including the historic Pearl District’s artsy bohemian past and the Lucky Labrador Brewing Co. where beers and man’s best friend come together in a relaxing picnic tabled venue. 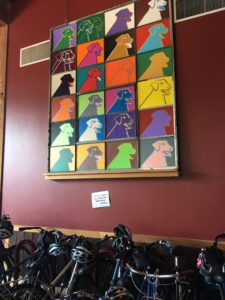 McMenamin’s Crystal ballroom and brewery was the final stop of the day. Once a service station, now home to zany artifacts, rich lore and carefully crafted beer, this indeed was a perfect departure to pedaling Portland. www.pedalbiketours.com 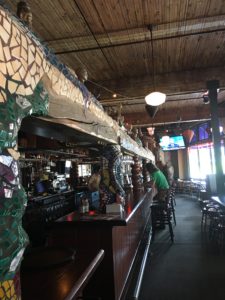 Final stop of the day- McMenamins.

Noticing several people carrying pink donut boxes down the street, we knew that we were in Voodoo Donut vicinity. We had to indulge in a few sweets after expending so many calories via biking. With a Pepto Bismol colored box in hand, we eagerly selected our quirky donut delights, which immediately put us under the hex of donut mania. www.Vodoodoughnut.com 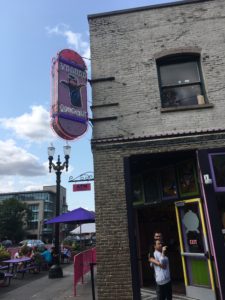 We proceeded in a sugar induced trance back to the hotel, for the nightly wine tasting and then onto Tusk, a new Portland dining hot spot. 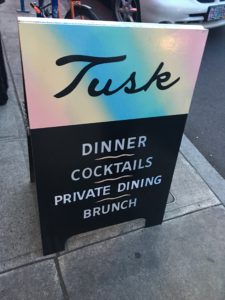 Tusk’s Middle Eastern driven menu is fresh and vivid like a Portland day after the rains. Executive Chef and Partner Sam Smith spent years at Zahav and Ava Gene’s honing his Armenian and Middle Eastern approach in inventing dishes that are in step with Mother Natures’ seasonal goodness. Using locally sourced vegetables and grains, Smith enlivens plates with bold color and flavors. 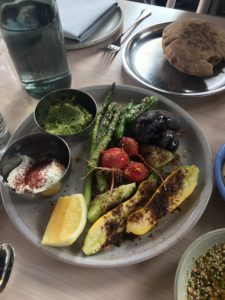 Tables are communal and dishes are sharable. Ingredients such as Aleppo pepper, preserved lemon, amba, zaatar, and nigella seeds are the alchemic additions that make these meals a feast of international flavors and textures. The Kibbe Naya with green wheat, raw lamb, turmeric yogurt chips and romaine is a dish reflective of innovation and exotic melding.

Accents of pepper and dry aged basturama elevate the Black Cod dish with richness while the crunchiness from marcona almonds lends a light textural component. Try each dish with an expertly prepared wine pairing from their eclectic international wine list or a refreshing cocktail. www.tuskpdx.com 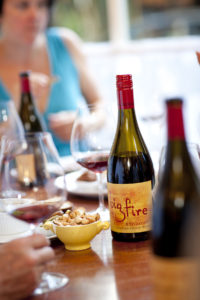 As we sat amongst the many Portlanders at Tusk we marveled at the vibrancy of the dishes and the convivial manner that the staff imparted to newcomers. Screenwriter Dean Devlin said, “Portland has all the accoutrements of a big city, but the heart and soul of it is a small town, so that creates an intimacy in a large environment.” After 24 hours we tasted, toured and fell in love with this city that embraces nature and nurture for the body and the soul.

Lausanne Switzerland, where to stay, sip and shop.

Try Brining Your Holiday Turkey To Make It Moist And Delicious Every Time.

Iconic Chef Joel Robuchon speaks about the past, the future and gives advice to aspiring Chefs at his 3 Star Michelin Restaurant at the MGM Grand in Las Vegas

Chef Brian Luscher of the Grape in Dallas Speaks of his Secrets to Success.