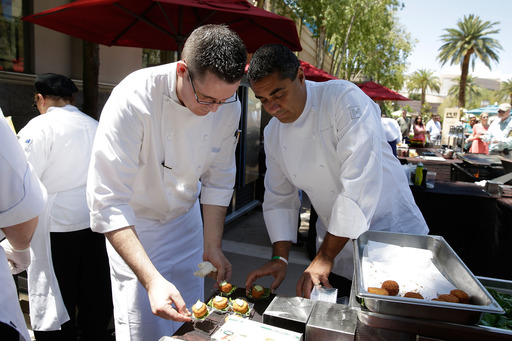 Without question Celebrity Chefs world wide have staked their claim under the neon making Las Vegas an epicurean destination not to be missed. There is so much more to what has happened over the last decade than the strip’s shinning culinary all stars. World class culinary talent can be found beyond the neon in very corner of the valley. Many of these Chefs and their staff have worked with the world’s best just 10 minutes away on the famed Las Vegas strip.
Many of these Chefs have known each other for years. Now independent, creating their own dream, they are a close group. Supporting each other on each of their own individual venues that are diverse as the chefs themselves.

Many of Las Vegas’ most acclaimed independent chef-restaurateurs, working together have made their event, UnStripped a reality This very special event is set for May 12, 2018 from 9 p.m. to 1 a.m. They call it The Feast of Friends presents Vegas UnStripped by Locals. The name could not be more appropriate featuring dishes at an undisclosed location in the Las Vegas Arts District and a not-to-be-missed afterparty.

The impressive lineup is certainly a whos who of Las Vegas elite chefs. Participating chefs include:

“I’m excited to be a part of creating more awareness of our local dining scene,” said Chef Brian Howard. “At UnStripped, you won’t see anything phoned in. We are coming to impress.”
This one of a kind event is produced by Las Vegas-based marketing consultant Eric Gladstone who saw a growing need for the off-Strip scene to be recognized “While the world knows Las Vegas Strip dining is incredible,” said Gladstone, “not enough attention is being paid to how great the off-Strip restaurants have become. They deserve their own spotlight.” He said.

Advance tickets are available at www.vegasunstripped.com for $65 (plus fees). All of the chefs and organizers are volunteering their time in order to keep the price accessible to all. Any net proceeds will be donated to a local downtown-based charity.

Baha Mar Resort In Nassau Bahamas Is Raising The Bar In The Caribbean With Five...
Scroll to top