The sixth annual Vegas Uncork’d kicked off once again up and down the famed Las Vegas Strip. It began in high style with Wolfgang Puck hosting an intimate lunch with Bon Appétit Editor in Chief, Adam Rapoport at Spago to celebrate its 20th anniversary. Wolfgang Puck himself served up palate pleasing delights of Austrian White Asparagus Salad, Grilled French Sea Basses Loup De Mer and Strawberries & Cream that put a smile on everyone’s face. 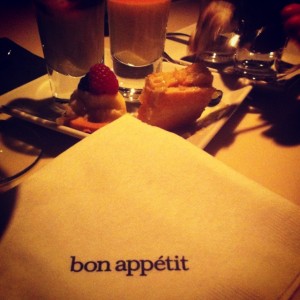 Wolfgang was not done yet as he joined fellow chefs from Bellagio, Caesars Palace, The Cosmopolitan and Mandalay Bay at the Caesars Palace fountains to officially mark the beginning of Vegas Uncork’d. The crowds enthusiasm bubbled over when Wolfgang Puck sabered off a bottle of Mionetto Prosecco marking the traditional official start of this culinary weekend full of all-stars.

As the sun began to set , many of the Celebrity Chef  kitchens at Caesars Palace heated up with  several Master Series Dinners where Guy Savoy, Bobby Flay, François Payard, The Pellegrino Family at RAOs  and Michel Richard served up signature dishes to impress the guests. 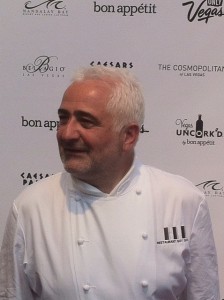 In addition to the mouthwatering Master Series Dinners, Vegas Uncork’d literally took it to the streets when 15 of Las Vegas’ food trucks arrived in formation on Bellagio’s Hidden Drive for their inaugural “Follow That Food Truck “ event. The numerous guests enjoyed delicious treats from their favorite Food Trucks while mingling with world-renowned chefs Julian Serrano, Michael Mina, Jean-Georges Vongerichten and Todd English.

The second day of this culinary parade of all stars began with first year participant, The Cosmopolitan of Las Vegas and what a way to start !  A Paella Lunch at Jaleo where Chef José Andrés showed why he is a master in the kitchen  as he schooled the  audience on  how to prepare paella on a wood-fired paella grill which happens to be the only one in the U.S. 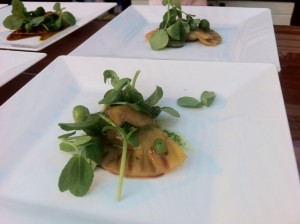 Just down the street at the Bellagio, Raj Parr, Mina Group’s Wine Director, Jason Smith, Master Sommelier and Bellagio’s Wine Director, and Carlos Splendorini at My Favorite teamed up to to take their guests on an adventure to be remembered. They started with The Violet Femme, a dish with Encanto Pisco, Crème De Violette, honey and lavender;  Then a tasty Hamachi Crudo, a sake-cured cucumber with sea bream emulsion paired with Yoshinogawa Winter Warrior Junmai Ginjo Sake and then a succulent Liberty Farms Duck with Stewed Rhubarb and Foie Gras Kumquat paired with Au Bon Climat Sanford & Benedic;,  This adventure on a plate  did not end until the guests  were  treated with a  Passion Fruit Panna Cotta with a Coconut-Lime Sorbet paired with Kracher Cuvee Beerenauslese. Vegas Uncork’d was just getting up a full steam and headed into the afternoon. 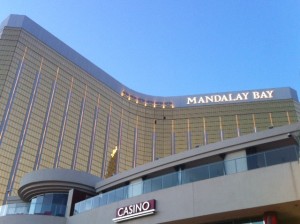 Mandalay Bay got into the act with  Border Grill’s Mary Sue Milliken, Susan Feniger and Executive Chef Michael Minor putting on a Southwestern show of world class expertise they are known for. Starting with a spicy Cucumber Jalapeño Margarita ,  the chefs launched their cooking demonstration by  serving  a Smoky Bean, Bacon And Avocado Tostada,  Tomatillo Glazed Ribs with Esquite and Churro Tots.

Vegas Uncork’d is not just about world class Chefs and their works of art but also wine as well. David Lynch, Bon Appétit’s wine editor, and Raj Parr, taught a sellout crowd how to pair affordable wines with elevated menus. Five wines ranging from moderately-priced to “break-the-bank” were served during each of the four courses prepared by Chef Michael Mina.

With all of the great events offered at Vegas Uncork’d  , the crown jewel is The Grand Tasting . This year’s Grand Tasting appealed to a sold-out crowd of 2,500 and transformed the Garden of Gods pool into an epicurean paradise of delight. It was a foodie heavenly dream to mingle with Celebrity Chefs like  Gordon Ramsay, Todd English, Francois Payard, Nobu Matsuhisa, David Myers, Bradley Ogden, Charlie Palmer, Rick Moonen, José Andrés and Guy Savoy and Scott Conant . 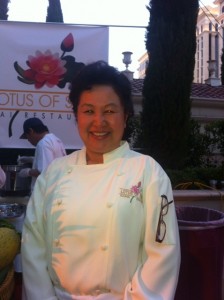 The party continued on into the early morning hours at The Cosmopolitan with the Celebrity Chef Poker Tournament at The Boulevard Pool that featured sliders from STK, signature cocktails from Mixologist  David Myer’s and tunes by Mia & Caitlin. Guests and chefs including Rick Moonen, Susan Feniger, Jean-George Vongerichten, José Andrés, Bruce Bromberg, Scott Conant and Stephen Hopcraft  showed off  their poker faces at the  lively tables Two Hours later ,  Mario Disi, General Manager of Scarpetta, emerged as the winner and Andrew Knowlton, Bon Appétit’s restaurant and drinks editor, followed as a runner-up. All prize winnings were donated to Communities In Schools, Opportunity Village and Vegas Roots Community Gardens.

After a late night , guests got some sleep and started along  Bon Appetit’s epic culinary road up and down the strip.  Chronicles of A Couple That Cooks Together at Bellagio’s Prime was an excellent choice as guests were treated to a tasty  meal served by renowned Chef Jean-Georges Vongerichten and his wife Marja, host of Kimchi Chronicles on PBS.  They started us off with Herbed Mung Bean Pancakes and continued on with the main course of Kobe Ribeye “Bulgogi” style with Kimchi fried rice and finished with a Passion Fruit Sunflower, complete with crisp meringue and a decadent vanilla pastry cream. 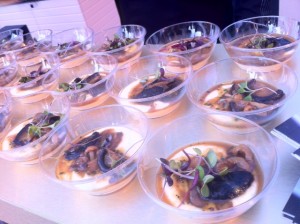 Estiatorio Milos at The Cosmopolitan joined in the culinary parade as guests joined Chef Costas Spiliadis for the At the Fish Market with Costas Spiliadis to share secrets of healthy eating through a Mediterranean diet.

Everyone’s sweet tooth was exquisitely satisfied by the sweet temptations of pastries and desserts at  Payard Patisserie & Bistro at Caesars Palace  and  Chef Francois Payard, where he shared his masterful s skills and techniques with his guests .

A great way to celebrate after some great cuisine is with good company and cocktails. The Cosmopolitan of Las Vegas  was the place to be as   guests enjoyed an endless flow of high-end cocktails with Bon Appétit Restaurant and Drinks Editor Andrew Knowlton, nationally-renowned restaurateur Scott Conant and Cosmopolitan mixologist Mariena Mercer.  One of the highlights was “The Libertine” made with Maker’s Mark 46, rosemary syrup, lemon juice, maple syrup and egg white and the “Verbena” made with Milagro Silver, ginger syrup and Yuzu Sour. 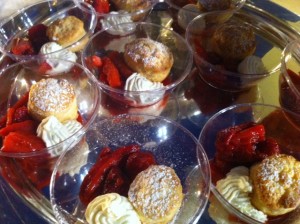 As the busy day turned into evening , guests took part in a champagne toast with Chef Alain Ducasse at THEhotel’s miX at Mandalay Bay for The Nature of a Good Party where they enjoyed an  exclusive five-course Taste of  MIX menu with wine pairings

For the beach bums there was a clambake like no other we have see. As waves crashed  on the Mandalay Bay Beach  shore and the stars came out in full glitter , guests were treated to live music and an OPI nail station as they enjoyed world class cocktails  and of course  fresh seafood from Chefs Charlie Palmer, Rick Moonen, Mary Sue Milliken and Susan Feniger. 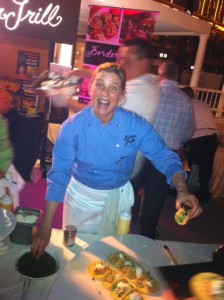 After spending time on the beach it was time to end the day with a view from  the MIX  rooftop lounge at THEhotel at Mandalay Bay for an  After Hours party .  Guest partied the night away s alongside Chefs Rick Moonen, Charlie Palmer, Mary Sue Milliken, Susan Feniger and many others. 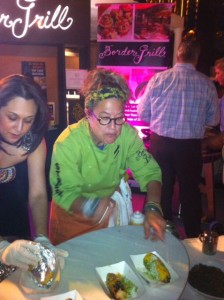 The dance floor was vibrant as guests danced the night away with beats spun by Chef Keller himself  and DJ Freaky le Freak. Cocktails continued to flow alongside a selection of tasty bite-sized desserts such as cotton candy, chocolate lollipops and mini dessert tarts created by Chef Alain Ducasse, Chef Hubert Keller and Mandalay Bay Executive Pastry chef and Master Chocolatier Vincent Pilon. 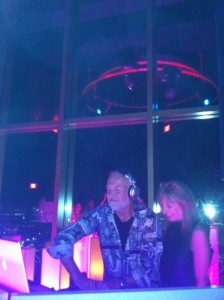 Vegas Uncork’d  falls over the Mothers Day weekend  and rightfully so , Mothers are held in high regard On Mother’s Day,guests attended a  Sparkling Brunch with Guy Savoy  and were treated to very  exclusive menu by the famed   Michelin-starred restaurant at Caesars Palace. What a better gift for  the Moms in the house as they  were beyond thrilled  to meet a world-renowned chef ,  free flowing champagne and an  unforgettable menu .

Vegas Uncork’d 20120 was  coming to an end , many  guests joined the renowned  Pellegrino family on the patio of Rao’s at Caesars Palace for Rao’s On The Grill. Very Casual attire was the mood for his las event as Frank Pellegrino Jr. , dressed in casual clothes and a baseball cap, grabbled a spatula  and manned the grill serving up Italian dishes at this backyard-style BBQ.  The family also shared a  a preview of Italian dishes from the soon to be released cookbook, Rao’s on the Grill, 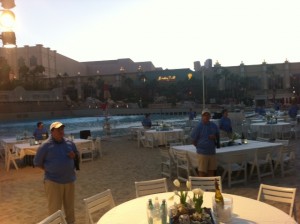 Yet another Vegas Uncork’d  is in the history books and this one has been the best thus far. This 4 day celebration features a parade of culinary stars , mixologists and restaurateurs  that would be very hard to match anywhere else in the world  but under the star-studded  neon lights of Las Vegas . Bon Appetit and its Vegas Uncork’d is held each May  and we wait with forks in hand and wine glasses at the ready for May  2013 when Vegas Uncork’d by Bon Appetit will reappear like an annual comet in the sky traveling  up and down the starlit Las Vegas strip .

Paso Robles California and Its Iconic Wines Have the World Tasking Notice.

Pear Cobbler with Plum Streusel to Please Your Fall Palate

Kathleen Inman of Napa’s Inman Family Wines Is a Rising Star St Martin’s Courtyard will pay tribute to the cultural diversity of London...
Scroll to top