Chef Aarón Sanchez Specializes in contemporary Mexican and Latin cuisines and is  the executive chef/owner of NYC’s Centrico and Kansas City’s Mestizo, as well as the culinary visionary behind Crossroads at House of Blues nationwide, he  has been praised as a chef who “repeatedly transforms the familiar” (New York Magazine). The recipient of the “National Award” at the Flavors of Passion Awards, honoring the nation’s best Latino chefs. Sanchez was also nominated for “Rising Star Chef of the Year” by the James Beard Foundation in 2005. 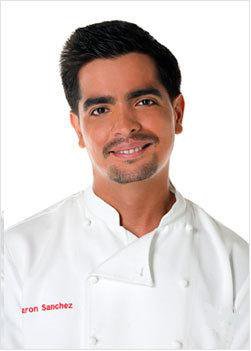 He has also Sanchez been named one of the “50 Most Beautiful People” in People Magazine, where his recipes have been published. Sanchez is a major personality outside of the television and restaurant worlds, having published two books (‘La Comida del Barrio’ and ‘Simple Food, Big Flavor: Unforgettable Mexican-Inspired Recipes from My Kitchen to Yours’) and designed the first-ever line of signature chef shoes for MOZO Shoes, a Deckers Corporation company.

Chef  Sanchez added yet another hit show to his Food Network resume this summer as a judge on ‘Chopped: Grill Masters,’ airing Sundays at 10pm ET/9pm CT through August 19. The show is a special edition of the cooking competition in which 16 chefs compete for a $50,000 grand prize over five episodes. Sanchez is joined by fellow judges Amanda Freitag and Marc Murphy, as well as host Ted Allen. 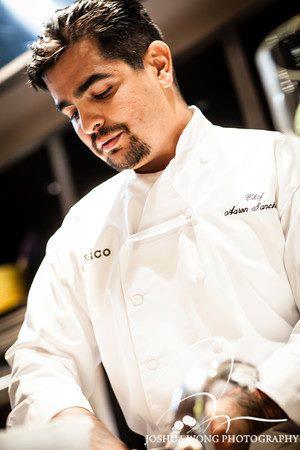 Thus far 2012 is has been a very busy year for Sanchez. A veteran of Food Network hits like ‘Chopped’, ‘Heat Seekers’ and ‘Chefs vs. City,’ He will appear on the Food Network’s ‘Best Thing I Ever Made,’ the hit show where chefs and food experts share their culinary secrets. This fall, Sanchez will film ‘Chefs Aventureros,’ a new Spanish-language travel/food series for Utilisima, and in winter 2013 will shoot the second season of Utilisma’s #1-rated cooking series ‘Aaron Loves New York,’ a New York-centric cooking show in which Aarón shares his personal stories and his love of Latin flavors with friends, family and guests.

He even recently appeared at the White House as a special guest chef, and in the coming months he will appear at the New York Wine & Food and Miami Wine & Food festivals.

Yes, 2012 look very promising for this amazing Chef, we can only look forward to see what 2013 and beyond will bring to this very talented culinary artist.

Close to the summit! On the way to the top! #greys

Captains Sampler! at the renown @captainsanchorage

After such a challenging hike, a martini made just