James B. Beam Distilling Co located in Clermont, KY has recently undergone a major renovation and has opened a restaurant onsite called The Kitchen Table. This distillery produces some of the most iconic whiskeys in the world and gifting a distillery tour or ticket to their upcoming Clermont Supper Club dinners is also a wonderful gifting option.

Hardin’s Creek, crafted at the James B. Beam Distilling Co is a new brand that charts the ongoing story of the Beam family legacy, one that is more than 227 years in the making, through these highly limited and rare releases. Hardin’s Creek is the next generation of boundary-pushing, premium American Whiskey inspired by the expertise of seven generations of Beam Master Distillers. 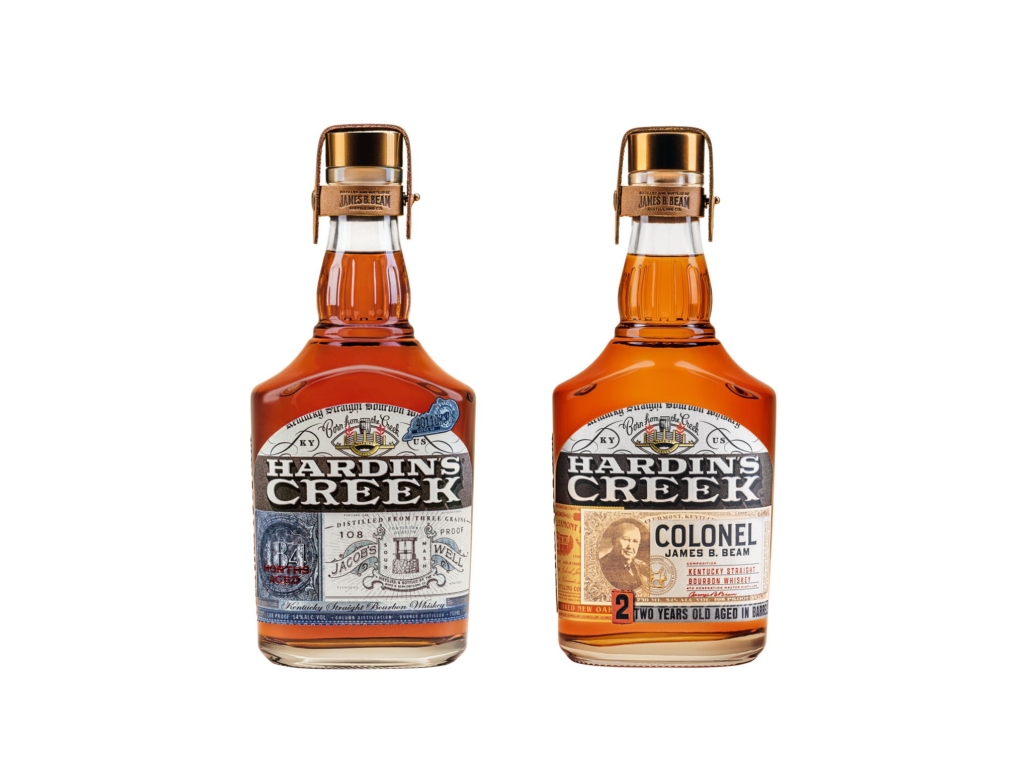 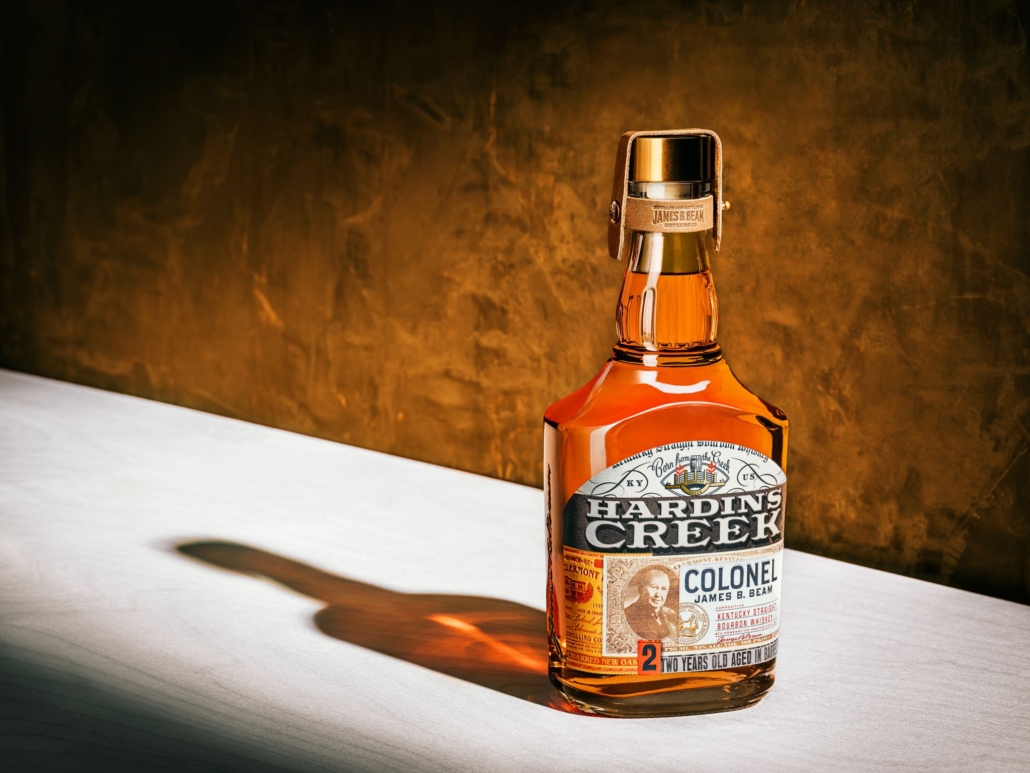 Hardin’s Creek Jacob’s Well Kentucky Straight Bourbon Whiskey (SRP: $149.99), is a thoughtful blend of two ultra-aged expressions: one 16-year-old-traditional bourbon and one 15-year-old high-rye bourbon blended to achieve a depth of flavor unlike any other in Beam history. Freddie Noe distilled it using precious barrels laid down years ago by other hands, which he then intuitively hand-selected, blending together centuries of expertise with a vision for the future.

Hardin’s Creek Colonel James B. Beam Kentucky Straight Bourbon Whiskey (SRP: $79.99), is an homage to Colonel James B. Beam aka Jim Beam, who got the Clermont distillery up and running in just 120 days post-prohibition. In honor of that legacy, Colonel James B. Beam was crafted taking a page out of his signature style. The limited-edition, two-year-old whiskey achieves a depth of flavor usually reserved for more mature bourbons by taking it off the still at a lower distillation proof, imparting more flavor from the fermentation process and letting the barrel’s characteristics shine through at a younger age.

Ferrand Cognacs are produced by Maison Ferrand, founded by Owner and Master Blender Alexandre Gabriel. Guided by creativity while preserving ancestral methods of production, Ferrand Cognacs aim to capture the true essence of the prestigious terroir of Grande Champagne. 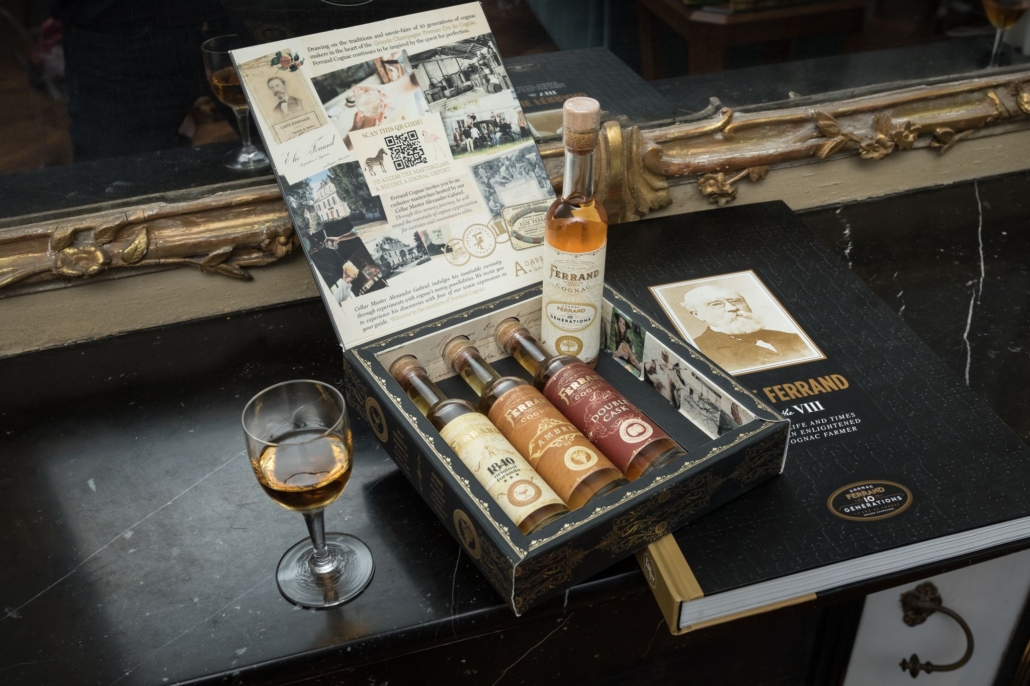 Ferrand Cognac The Collection (SRP: $59.99), a discovery set containing four 100ml bottles of Ferrand Cognac – 1840 Original Formula, Ambré, 10 Générations, and Double Cask Réserve – that embody the brand’s creative and unconventional approach to cognac. More than just a sampling of some of Ferrand’s unique and surprising creations, The Collection is a crash course in appreciating cognac guided by Alexandre himself. Each box contains a QR code that launches a multi-episode digital master class, showing you the elements that make up a fine cognac: the vineyards that thrive in the Grande Champagne terroir, the distillery with its handcrafted copper stills, the aging cellars, and more.

The pioneer of French gin, Citadelle Gin is a château-to-bottle gin and has been crafting authentic gin de terroir in the southwest of France for 25 years. Produced by Maison Ferrand, founded by Master Blender Alexandre Gabriel, Alexandre developed and patented the first-ever progressive infusion process, which consists of infusing each botanical in succession to preserve its organoleptic quality and capture the ultimate flavor. Created in honor of Citadelle’s 25th anniversary and new distillery, the limited-edition Citadelle Gin Juniper Décadence (SRP: $34.99) perfectly embodies the spirit of the gin de château and pays tribute to its terroir and to the juniper tree so dear to the brand; a large portion of the juniper berries used in its composition was grown in Cognac, a short distance from the distillery. Juniper Décadence is also an ode to the art of aging, this time, aged in small juniper barrels.

Since the juniper is a modestly sized tree, its wood is not suitable for making long, curved staves, as it is too hard to bend, so special small casks were built with straight sides. 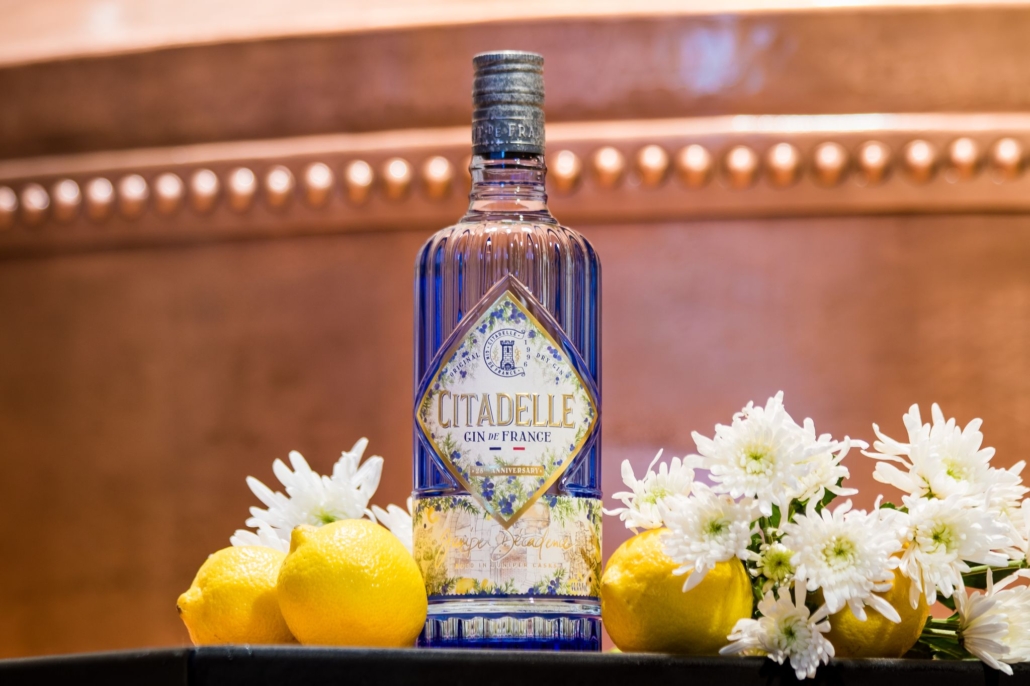 This year, Citadelle introduces a new limited-edition collection of unexpected gins to the portfolio with the aptly named Les Excentriques. The first release, Citadelle Gin Vive le Cornichon (SRP: $29.99), stars the cornichon pickle, a true symbol of France. The cornichons infused in Citadelle Original’s aromatic base come from Maison Marc, a Burgundy-based family business that grows its Cucumis sativus without insecticides, herbicides or preservatives, and picks each one by hand. These are values shared by Maison Ferrand, which has planted 2,500 juniper trees in front of its home at Château de Bonbonnet, all of which will soon be certified organic. Vive le Cornichon dry gin is the first expression developed in the new Citadelle Distillery, designed by Alexandre Gabriel and entirely constructed by the château’s in-house teams. Like its predecessors, it was distilled with Citadelle’s patented process of progressive infusion of juniper berries and 19 other botanicals, as well as cornichon pickles. Available in select markets.

Not new, but noteworthy – Roku Gin (SRP: $24.99) from the House of Suntory, created by combining six unique Japanese botanicals with eight traditional gin botanicals. The Japanese botanicals – Sakura flower, Sakura leaf, Yuzu peel, Sencha tea, Gyokuro tea and Sansho pepper – are harvested in accordance with ‘shun’, the tradition of enjoying each ingredient at its best by only harvesting at its peak of flavor and perfection.

For more than three generations, the master blenders at the House of Suntory, the Founding House of Japanese Whisky, have devoted themselves to pursuing the harmony of Japanese nature and craftsmanship to produce the legendary Yamazaki, Hakushu, Hibiki and Toki whiskies.

Just launched in October, Hibiki Blossom Harmony Limited Edition (SRP: $160.00) blended whisky features whiskies finished in Sakura casks. Sakura Blossom season in early spring has always been an occasion for celebration in Japan, with many gathering around the beautiful flowering Sakura trees that inspire the Japanese to appreciate life as it blooms. Hibiki Blossom Harmony blends a rare selection of whiskies finished in Sakura wood casks with diverse matured malt and grain whiskies from Suntory’s Yamazaki, Hakushu, and Chita distilleries.

Hibiki 30-Year-Old (SRP: $5,000.00) was first released in 1997 as a rare, limited edition. It is the paragon of the Hibiki brand and the art of Japanese craftsmanship. For the first time, this exquisite bottle will be available in the U.S. as of October. Hibiki 30 features a select blend of Yamazaki® malt whiskies that are 30 years and older from Suntory’s treasured historic collection, with mild grain whiskies that have also matured at least 30 years. With a mere few thousand bottles produced each year, each is bottled by hand. This luxurious liquor has received accolades and awards from whisky connoisseurs around the world and it represents the pinnacle of whisky making at Suntory.

With the launch of the 2022 Yamazaki Limited Edition Tsukuriwake Selection, the House of Suntory unveils a fundamental piece of its unrivaled craftsmanship and introduces the foundational pillars of Yamazaki Single Malt Whisky – Puncheon, Peated Malt, Spanish Oak, and Mizunara. The collection honors Tsukuriwake, which means “artisanship through a diversity of making” and is embraced by the Founding House of Japanese Whisky.

The Puncheon is considered as the “heart” of what makes Yamazaki Single Malt, Yamazaki. The Yamazaki Puncheon Single Malt Whisky (SRP: $450.00) is comprised of meticulously selected malts aged exclusively in puncheons crafted by Suntory artisans from hand-selected American oak.

Mizunara is a species of oak native to Japan and is considered the signature enhancer giving Yamazaki its quintessential Japanese character and elegance. Whiskies which undergo a long maturation in Mizunara casks take on a distinctive Japanese spiciness and incense-like flavor of sandalwood and agarwood. The Yamazaki Mizunara Single Malt Whisky (SRP: $620.00)

Made at the first distillery on Islay in 1779, Bowmore Islay Single Malt Scotch Whisky is known as one of the most balanced Islay whiskies, which are often thought to be the smokiest Scotch whiskies in the world. 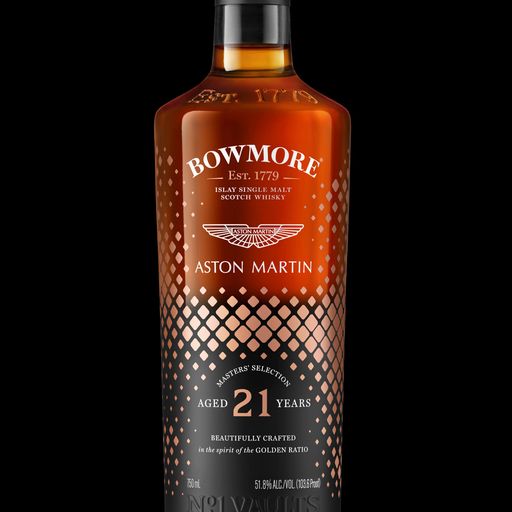 Released earlier this year, Bowmore Masters’ Selection (SRP: $400.00) is a collaboration between Bowmore and Aston Martin, imagined and defined by two Masters, Bowmore Master Whisky Blender Ron Welsh and Aston Martin Executive Vice President and Chief Creative Officer Marek Reichman. This whisky marks the first time Bowmore has adopted the “Golden Ratio” principle – the mathematical ratio found in nature that creates aesthetically pleasing compositions – which sits at the heart of the design of every Aston Martin.

Taking inspiration from an engineered approach, Masters’ Selection incorporates the divine proportion of 61.8% formed from a base of 21-year-old Bowmore matured in first-fill Pedro Ximenez and Oloroso sherry casks. The remaining parts are made up of exact ratios of each other, in line with the Golden Ratio theory, and include exceptionally aged Bowmore matured for over 35 years. 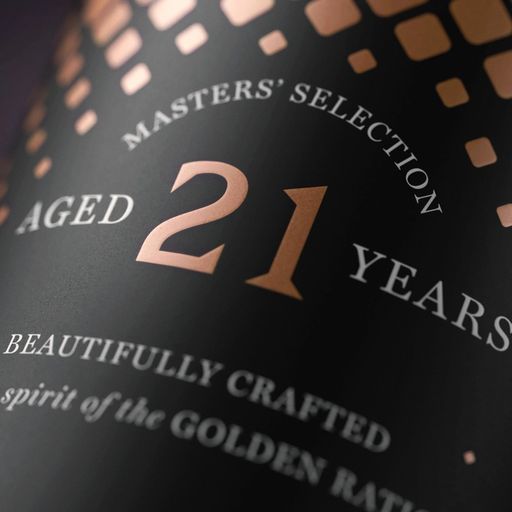 From the Highlands of Mexico where the finest agave is grown comes El Tesoro Tequila. It tastes like no other because it is made like no other – 100% estate-grown agave, 100% tahona crushed, double distilled to proof, and a production process that is never rushed and has been handed down from generation to generation.

La Altena Distillery this year celebrates its 85th Anniversary, and Carlos Camarena is thrilled to share the El Tesoro 85th Anniversary Limited Edition (SRP: $499.00). This exquisite, Extra Anejo tequila is aged in Booker’s Bourbon 30th Anniversary Limited Edition Casks, for an unmatched partnership between two global distilling family giants. Not new but noteworthy – Haku Vodka (SRP: $27.99) from the House of Suntory. This premium craft vodka is made from 100 percent Japanese white rice that is fermented with koji rice to create a mash. The mash is then distilled through pot stills to create a rice spirit. It is then distilled for a second time through two different processes in a pot still and column still and then blended and filtered through bamboo charcoal in Osaka, Japan. This process, unique to Suntory, preserves and enhances the rice’s delicately sweet and subtle flavors. Make a Haku Martini with this vodka and it is the perfect accompaniment to sushi and sashimi.

This year get in the Spirit with at least a couple of these brilliant spirits!

Cuisineist on Instagram IGTV .. Join us and tour t

Starting yet another day with Chef Adrian and Jay

Starting yet another day with Chef Adrian and Jay

Just waiting on my train @asvrr1 Working on assign

Walkabout in the historic district.. Working on as

Enjoing the history of the this brilliant estate..

Country Fried Steak with all the trimmings.. #hitc