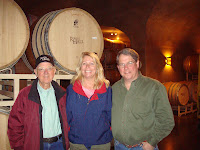 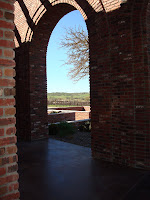 We have visited Robert Hall winery on a few previous trips to Paso Robles. On this visit we had the opportunity to speak with Robert Hall and Winemaker Don Brady about their wines and their passion for this landmark winery. Robert Hall established the winery in 2002 with its grand opening. This was a 40 year journey for Robert and 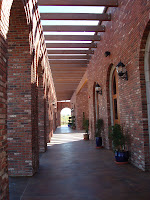 his wife Margaret. After a visit to the Rhone valley in the 1970’s Robert was fascinated by the Food and Wine lifestyle of the Rhone. In the 1980’s Robert used his years of business expertise and began to develop his idea of a premium-producing vineyard and began to look for the right area to produce premium Rhone style grapes. In the 1990s Robert and Margaret found Paso Robles to be the appropriate area where the soil,
warm days and cool nights were ideal for his Rhone style wines.

In 2001 award winning Winemaker Don Brady joined Robert at the winery. Don had earned world wide recognition in 2001 when he became the recipient of the International Wine and Spirits “Wine of Amercia” award. As Winemaker for Robert Hall , Don was awarded the Winemaker of the Year award in 2006 by the Paso Robles County Alliance in partnership with the Independent Grape Growers of Paso Robles and San Luis Obispo Vintners Association.

Today the Winery and Hospitality Center is situated on 21.8 acres surrounded by Syrah and Cabernet Sauvignon. There is a reflecting pool and a floral garden the includes 15 varieties of roses. The Hospitality center has a wine library and dinning room . The Hospitality Center’s 10,000 square feet is one on the largest venues on the Central Coast for special events.

The 19,000 square foot tasting room gives its visitors a 90 degree view of the nearby wine country through its 13 foot high windows. There are also tours to the underground wine caverns as well. This is such an amazing place where you can enjoy music in the 300 seat Amphitheatre,
play Bocce Ball or have a picnic in this incredible facility that Robert Hall has created.

On our visit Robert took us through a vertical tasting of the Robert Hall Zinfandel 2002-2005 vintages. The
2004 Zinfandel Sauret Vineyard really stood out for us. It was full bodied with aromas of raspberry and cranberry with a hint of
spice with mild tannins on the finish. The 2002 Zinfandel Sauret Vineyard is ageing nicely and was a real treat with its black pepper,
wild berrys with chocolate and mild tannins on the finish. It was a terrific experience to do a vertical tasting with Robert as he explained each
one.

The Robert Hall Vineyard is a collection of four estate vineyards that show off the best the Paso Robles Appellation has to offer. The Home Vineyard , located just east of the property and is about 140 acres of the largest and most mature planting. This is the core vineyard and
serves as the foundation. The Terrace Vineyard is located above the Estrella River. Its 65 acres provides the vineyard with diverse planting
with such varietals as Roussanne, Cinsaut , and Mourvedere. The Bench Vineyard wraps around the Winery and Hospitality Center. This 12 acre planting produces intense and concentrated Cabernet Sauvignon and Syrah. Lastly, is the Brady Vineyard. This vineyard is located just east of the Terrace Vineyard and its 18 acres is planted with Cabernet Franc and Cabernet Sauvignon.