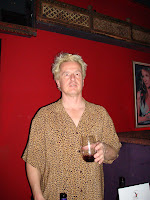 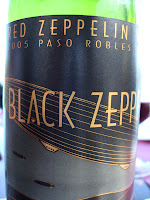 Winemaker Stillaman Brown met with Elaine Harris over lunch
and to say the least, we got quite a wine education. He is unlike any winemaker we have met in the past. We enjoyed his
2006 Red Zeppelin Chardonnay Paso Robles and the 2005 Red Zeppelin Black
Zeppelin Paso Robles Syrah as we learned more about this very articulate, intelligent winemaker.

With this impressive list of awards Stillman has made a reputation for himself as one of the country’s premier Syrah wine makers.

Stillman spoke to us about his La Mort Du Roi Paso Robles 2005. Which is now sold out . We were fortunate enough to have enjoyed
a bottle of this very unique Syrah. It is blended with Alicante Bouchet wich is a crossing between Grenache and Petit Bouchet. By
itself this grape produces wine that are unexciting but when blended adds additional color and texture to wines. Stillman added 18% of this varietal to the La Mort Du Roi Syrah and produced Syrah with color that is unmatched with a nose and palate to go with it. This is one of our favorite wines we have had in a while and are very anxious to see its cousin Black Zeppelin pick up where the La Mort Du Roi left off.

Stillman has been on the cutting edge of winemkeing for a long time, never afraid to add his artistry with blends and varietals to see what he can produce. We look fowward to more from Stillman and his Red Zeppelin wines. Somehow we don’t think we will be disappointed in whatever he comes up with in the future. For more information about Stillman and Red Zeppelin Wines you can go to www.redzeppelinwinery.com