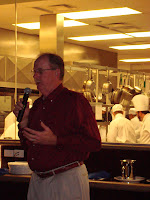 Ecluse Winemaker and Proprietors Steve and Pam Lock were in Las Vegas to host a dinner at the Le Cordon Bleu Culinary Institute in
Summerlin. After the event, Steve Lock spoke with Scott of Vino Las Vegas about Ecluse wines , their roots, and future plans.

Steve and Pam have done a great job producing these Bordeaux varietals and the quality comes through in all of them. You can taste the labor, care and passion in every sip of these wonderful , special wines. To learn more about Ecluse wines you can go to www. eclusewines.com