There are many great wineries in the Santa Lucia Highlands located in very
diverse Montery County. John Steinbeck described the area in his renown novel “
East of Eden” “The Santa Lucias stood up against the sky to the west and kept
the valley from the open sea, and they were dark and brooding…”

The  Santa Lucia mountains rise from Monterey’s County’s fertile Salinas Valley on  the west, separating it from the Pacific Ocean. The vines of this steep hillside  district enjoy cooling ocean breeze and fog from Monterey Bay. This results the  finest early varietally-labeled Pinots from the district. Slow, gentle ripening  that is California’s longest “hang time” creating exceptional intensity,  complexity, and balance in the grapes.

The McIntyre estate vineyard is  located in the central section of the Santa Lucia Highlands. The vineyard was  originally planted by the McFarland family in 1973 and boasts some of the  Highlands’ oldest Pinot Noir and Chardonnay vines. In 1979 a Pinot Noir from the  vineyard, under the “Stony Hill” label, is still regarded as one of best  produced from the area.

In March 1987, Steve McIntyre purchased  the eighty acre property and put his years of experience to the test. Through  three decades, the McIntyre family has been setting the standard for winegrowing  on the Central Coast and in Monterey County. Steve McIntyre graduated with a  Masters degree in Enology from CSU Fresno. He has planted and managed vineyards for numerous wineries including Galante, Smith & Hook, Mondavi, Joseph  Phelps and Bonny Doon and has grown grapes for such prestigious wineries as  Williams Selyem, Morgan, Artesa, Jordan, Bernardus, MacRostie, and Marilyn  Remark to name a few.Long before the “green” movement ,
Steve McIntyre helped “write the book” on sustainable winegrowing in the Santa
Lucia Highlands appellation.
This founding family has been farming in a  responsible, sustainable manner long before such practices became the “in” thing  to do.They grow grapes organically and biodynamically for several wineries and  apply many of these techniques to their winery as well. They farm in a  “sustainable system.” carefully taking into account everything that happens in  and around the vineyard . Sustainability is a self correcting discipline that  not only impacts the environment but society (their employees) and the bottom  line as well.
Prior to the 2009 harvest, McIntyre’s submit the copious  documentation required on every aspect of its farming practices and face the  independent auditor responsible for maintaining the strict new “sustainability”  standards. Because of McIntyre’s two decades history of careful, conscientious  stewardship of their Santa Lucia Highlands’ vineyard, they passed with flying  colors. The McIntyre estate holds “certified sustainable” status from both the  CCVT’s SIP  program and the statewide CSWA.
In  2004 , Steve brought in winemaker Byron Kosuge , a native Californian, born and
raised in the Central Valley of California and the son of a UC Davis professor.
Byron attended UC Davis, where he studied English Literature as well as
Viticulture and Enology. He began his winemaking career in 1985 as a Pinot Noir
and Chardonnay specialist in Carneros at Saintsbury Winery. After 15 years at
Saintsbury, he departed in 2001 to pursue other projects, including his own
label, B. Kosuge Wines, as well as Miura Vineyards, Foghorn, and Kingston Family
Vineyards in Chile.
All of these projects focus on Pinot Noir. He has also  served as consultant to several Napa and Sonoma- based wineriesToday the  McIntyre Vineyard keeps their focus on producing high quality Pinot Noir,  Chardonnay, Merlot and a very special bottling of Sparking wine as well. We had  the opportunity to have a focus tasting with Cheryl Warner , McIntyre Sales Manager to get to know these wines intimately. 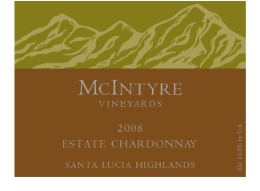 Monterey County is known for its light and flavorful
Chardonnays. The McIntyre 2008 Santa Lucia Highlands Estate Chardonnay was a
nice break from very “oaky” Chardonnays that don’t allow the true essences of
the varietal to be appreciated. The 2007 Vintage earned a 92 point score from
Wine Enthusiast which increased our expectation of the 2008 Vintage. On the nose
, this lovely Chardonnay gave us aromas of grapefruit and orange giving way to
lively citrus notes and balanced acid on the palate with hints of toast and
butter on the end with a long finish .
With only a 375 case production, this  lovely Chardonnay was light, refreshing and fruit forward showing the passion  that went into making this true to the varietal wine.We had the  opportunity to attend a Pinot Noir focus tasting last year and tasted Steve  McIntyre’s Pinot Noirs along with many of the other living legends that produce  some of the best Pinot Noirs ion the world. We looked forward to exploring them in much closer detail. 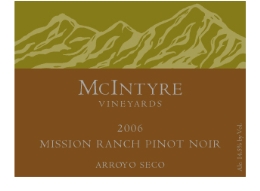 Arroyo Seco is located just east of the Southern boundary of
the Santa Lucia Highlands and is very well known for its Chardonnays and Pinot
Noirs. In the glass The 2006 Mission Ranch is quite deep ruby in color and full
bodied On the nose, big but nor overwhelming aromas of Cherry and blackberry
jump out . Other similarly dark fruit flavors, spice and smoke join with cherry
on the palate with a silky smooth finish.
This wine is a great example of what  can be done with Pinot Noir in the hands of a veteran. This Mission Ranch Pinot  Noir is a big boisterous Pinot Noir but can still be called light and pretty .  Like most Pinot Noirs that pick up a signature for its terrior this one is no  exception , with a spice note and dark fruit flavors that is a signature of the  Santa Lucia highlands and Arroyo Seco. A 400 case production makes this Pinot
Noir a real gem and should be enjoyed after decanting to allow all of its unique
flavors and Aromas to open.
2007 McIntyre Estate Pinot
Noir – Santa Lucia Highlands

Once again , our palates were salivating with
anticipation when we opened this lovely 92 Point Wine from Wine Enthusiast.
Steve used two clones of Pinot Noir sustainably grown from their estate vineyard
located in the heart of the coveted Santa Lucia Highlands appellation . On the
nose characteristic light cherry and raspberry notes flow into a palate of cola
and red jammy fruit with spice and a long elegant finish.
This wonderful Pinot  Noir was only the second Estate Pinot Noir to date and is very special. So  special in fact , we took a bottle of the 2007 Estate Pinot Noir into the world  renown Palme D’ Or restaurant in the historical Biltmore Resort and Spa in Coral  Gables Florida and shared it with the Wine Director / GM and
Chef.Steve McIntyre is a true legend and his wines reflect his  passion for winemaking and growing. We look forward to visiting again soon as he
is in the midst of planning a “green” winery and visitors’ center for their
estate vineyard.
The new facility will reflect their decades-long commitment to  sustainable winegrowing. In addition they plan to make conscientious use of the  natural attributes of their estate, employing solar collectors and even wind  power, taking advantage of those famously strong Highlands’ breezes off Monterey  Bay.
Scroll to top