Spanish wines (Spanish: vino español ) are wines produced in the southwestern European country of Spain. Located on the Iberian Peninsula, Spain has over 2.9 million acres (over 1.17 million hectares) planted—making it the most widely planted wine producing nation but it is the third largest producer of wine in the world, the largest being France followed by Italy. This is due, in part, to the very low yields and wide spacing of the old vines planted on the dry, infertile soil found in many Spanish wine regions. 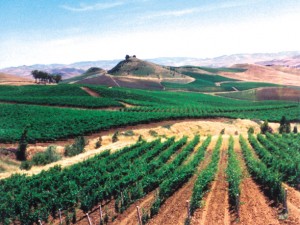 The country is ninth in worldwide consumptions with Spaniards drinking, on average, 10.06 gallons (38 liters) a year. The country has an abundance of native grape varieties, with over 400 varieties planted throughout Spain though 80 percent of the country’s wine production is from only 20 grapes—including Tempranillo, Albariño, Garnacha, Palomino, Airen, Macabeo, Parellada, Xarel·lo, Cariñena and Monastrell.

Major Spanish wine regions include the Rioja and Ribera del Duero which is known for their Tempranillo production; Jerez, the home of the fortified wine Sherry; Rías Baixas in the northwest region of Galicia that is known for its white wines made from Albariño and Catalonia which includes the Cava and still wine producing regions of the Penedès as well the Priorat region.