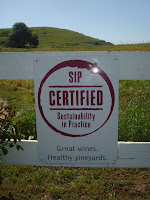 We watched Ampelos Cellars grow over many  years and they have obtained a reputation nationwide for quality , sustainable ,  organic wines .

Located in the Sta Rita Hills , Ampelos Cellars has  the climate to produce outstanding Estate grown wines from Pinot Noir to  Vionnay. 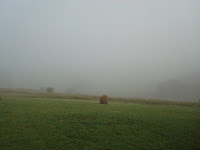 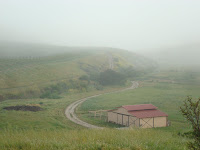 On  a recent visit to the Santa Barbara County Vintners Festival we spent some time
at the Ampelos Ranch and took a walk through their 82 acre vineyard with Peter
Work.

The morning started like most mornings in the Sta Rita hills with  thick ” Sea Smoke ” and cool temperatures hanging over the vineyard until late  morning when the sun burns through the thickness and temperatures rise. This  daily routine from nature helps to produce some of the best Pinot Noirs in the  country. 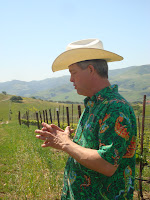 It  was a surrealistic beginning to our morning with a single Red Tail hawk circling
above , dogs herding sheep on a near by hill as we were being escorted by
Peter’s own Chocolate Labrador Retrievers as we started to explore the
vineyard. 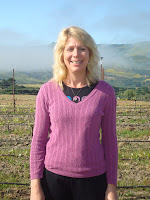 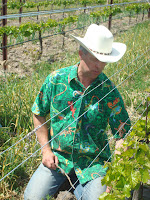 Peter  explained Ampelos was selected to be one of the first vineyards in California to  participate in the Certified Sustainable Winegrowing pilot program, and is very
proud to have met the guidelines of the program and gained this prestigious
certification. He went on to explain that Ampelos practices and promotes
biodynamic farming in the vineyard.

Biodynamics embraces all  aspects of organic but takes the notion further by holistically treating the  entire vineyard as a living organism. It is as much a philosophy of life as it  is a farming method, which is why it has influenced the thinking of so many who  initially explored the concept only because they wanted to grow better grapes.  Not only has it changed the way Peter and Rebecca grow grapes, but it has gotten  them to think more about the importance of balance with nature, the land and  farming practices. 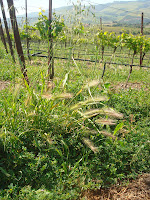 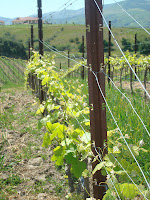 Peter  also added that they are concerned  about the environment and try to employ as many environmentally friendly  practices in the winery and in the vineyard. They plant fava beans and sweet  peas as part of their cover crop in the vineyard which improves the soil as well  as provides an environment for insects. They avoid letting the skins, stems,  seeds and lees go down the drain in the winery and instead carry it back to the  vineyard for composting.

They also do most of the work in the winery  by hand or by using gravity thereby reducing then need for power. They press our  grapes in a basket press by hand and only pump the wines once during their 16  months in the cellar. All of this minimizes the electricity they use. Even the  vineyard and home are solar powered. 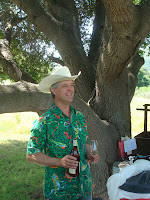 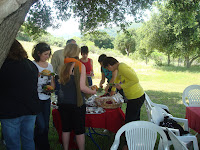 Ampelos  vineyard is at the eastern end of the Sta Rita Hills appellation which is
cool-climate area that is perfect for growing Pinot Noir and Syrah.

The  vineyard is one of the few vineyards that gets the cool breeze from the Santa
Rita Hills as well as the Santa Rosa Hills. 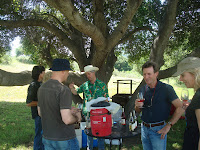 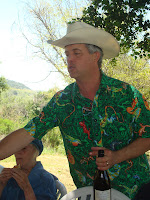 After  learning about the hands on work that Peter and Rebecca put into every aspect of  their vineyard it was now time to find some cool shade , have some lunch and try  some of these award wining wines . With the vineyard dogs guiding the way we  found the perfect place right in the middle of the vineyard. 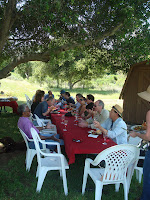 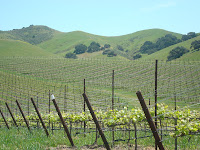 The  Ampelos Viognier , Santa Ynez Valley 2009 was a perfect wine to start off with
after our walk. It’s refreshing citrus notes of lemon came through with a nice
balance of acidity and a lingering finish.

Another stand out  for us has always been the Ampelos Rose of Syrah. Their 2009 Rose of Syrah Santa  Ynez Vally did not disappoint with a lovely pale rose color in the glass made in  the old world provencal style. 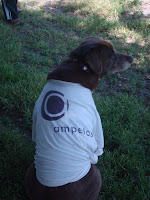 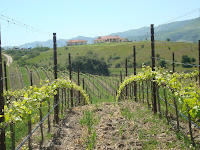 Both of which have won awards and are  highly acclaimed.In addition to their lovely Pinot Noirs , The Gamma Syrah Sta  Rita Hills Ampleos Vineyard 2006 and their own very special Syrache, Santa  Barbara County , 2006 which is their own very unique blend of Syrah and Grenache  that has made a name for it self on its own right.

Peter and Rebecca Work  and an incredible story that has taken them on a journey from high levels of the  corporate world to their Ranch in the Sta Rita hills . When traveling in Santa  Barbara County, Ampelos Cellars winery in Lompoc is a must stop. For more information or to schedule a visit please visit http://www.ampeloscellars.com