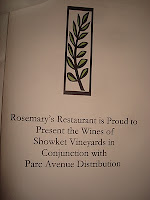 Rosemarys Restaurant in Las Vegas has been a
delightful dining venue for us for many years . We have met many good friends
while at the bar for their Wednesday ladies night and their very popular Sunday
1/2 price bottle night as well.

Chef Michael and Wendy Jordan  draw from a
variety of culinary influences to create French-inspired, creative American
cuisine with regional twists from New Orleans, the Deep South and the Midwest.
Most important of all is that they are real  people and treat their dining
guests as a member of their family.

Rosemarys Restaurant is not
only well known for its food but their wine list as well. Of course they have
some of the big names that many would come to expect at a Restaurant of this
caliber . However , their list also features many boutique wines,  many of which
may not be found anywhere else in town. Showket  Vineyards from the hollowed
ground of Oakville California is one of these very special wines and recently
had a 5 course wine dinner that showed off this incredible wine and great
pairing skills of Chef Michael Jordan and Wine Director James
Repman. 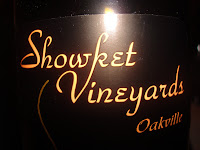 The Story of Showket is a very
interesting one.After searching for three years, in October, 1988, Kal and
Dorothy Showket bought a beautiful property in the hills overlooking Oakville in
the heart of Napa Valley. 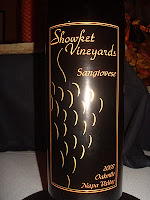 The Showkets knew they had a unique
location, but they also knew they had much hard work ahead of them in order to
bring the vineyard up to its potential.

The soils of Oakville are known to be one of the top winegrowing regions in the world for Cabernet Sauvignon. The concentration of cult wineries in this area is a testament to the high quality of wines this part of the world can produce.

Within the Oakville appellation, Showket Vineyards with an elevation of approximately 600 feet is perched in the hills above Silverado Trail. With neighbors like Dalle Valle, Vine Cliff, Phelps’ Backus vineyard, Oakville Ranch, Turnbull’s
Weitz Vineyard and sitting above Screaming Eagle and Rudd Estate , they are in
very good company. 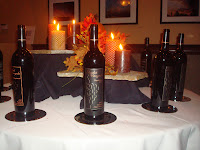 Before producing wines under their own label,
the Showkets sold some of their fruit to top wineries like Caymus, Dalle Valle,
and Shafer.

Because of the elevation and orientation of the vineyard no frost protection is required. The soil is clay-loam type that is very rocky. The vines are stressed sufficiently to produce excellent wines.

To get the evening started guests were treated with
a Mushroom Duxelle Stuffed Profiterole with Fennel Aioli
:
For the opening cocktail , a favorite of Hemingway himself , ”
Death in the Afternoon ” Champagne Cocktail. It was a very interesting
start to what should be a great dinner. 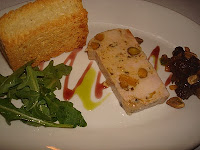 This very big wine with black cherry  and plums went well with
the spicy Arugula and Cherry Relish for a nice paring that showed off the subtle
flavors of the dish. 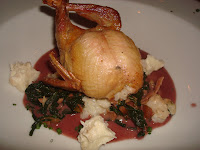 This was the most complex dish of the
night with layer after layer of flavors.  The blend of  Cabernet Sauvignon ,
Merlot and Cabernet Franc each took turns accenting each delicious layer of this
incredible dish. And for those who are curious Asnate Sana means ” Thank you
very much” in Swahili which was inspired by the Showket’s recent trip to
Africa 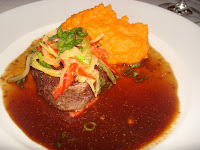 The meatiest
dish of the night  fared well with the Merlot’s dark chocolate accents  coming
through  first and  followed by the Cabernet and its classic cassis notes for a
very balanced  dish that kept these usually big flavors in perfect harmony.

Showket
Cabernet Sauvignon 2007
What a better
finish could one ask for than an excellent contrasting  pairing.  The dark
chocolate bread pudding with the Cabernet’s classic cassis and blackberry notes
made the first bites a nice treat of contrasting flavors and adding the cassis
sorbet was like putting an exclamation point at the end of a sentence.
Guests could not
help but go home with smile after such a very special dinner that featured a
small vineyard from a premier appellation teamed up with  the culinary genius of
Chef Michael and Wendy Jordan and their staff.
Scroll to top