Legend has it that grape-growing in Japan began in 718 CE, in Katsunuma, Yamanashi Prefecture. Wine may have been made from local grapes there, but the first documented case of wine consumption in Japan was in the 16th century, when the Jesuit missionaries arrived from Portugal.[1Saint Francis Xavier brought wines as gifts for the feudal lords of Kyūshū, and other missionaries continued the practice, resulting in locals acquiring taste for wine and importing it regularly. 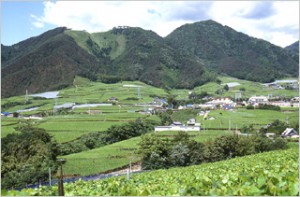 They called the Portuguese wine chintashu (珍陀酒?), combining the Portuguese word tinto (chinta in Japanese) meaning red and shu (酒?) meaning liquor. However, the enthusiastic adoption of Western culture during the Meiji restoration in the late 1860s had to take place before regular production of local wine started.  The first attempt to produce wine locally was undertaken in Yamanashi, in 1875. During the first period, cultivation of American grape varieties formed the core of Japanese wine grapes, however they experienced a setback with a Phylloxera epidemic.