The industries top sommeliers and wine enthusiasts joined Wirtz Beverage
Nevada and Crush Wines in a special tasting of the Rudi Wiest portfolio of German
Riesling. The event, which was held at the renowned Lotus of Siam in Las Vegas
and showed off the new 2010 vintages. Guests were able to sample cuisine from
James Beard award winning Chef Saipin Chutima which paired nicely with the crisp
acidity and residual sugar of the Rieslings. Wine makers and producers from
Monchof, Karthauserhof, Schloss Schonborn and Zilliken flew in specifically for
the chance to showcase the 2010 Vintage from the finest wine producing regions
in Germany. 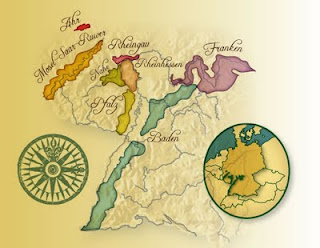 Having them pour their own wines gave guests a
rare opportunity to gain in depth knowledge and understanding of the wines and
their terrior from the men and women who make them.

Rudi Wiest Selections is a leading importer of
fine German wines in the United States market. Since 1978 their sole focus has
been rebuilding the image of legendary Germany wine estates through education of
consumers and the wine trade as well. Visiting Germany two to three times a
year, they maintain personal relationships with every estate they have selected.

Rudy Weist , the producers and winemakers
were all in agreement that they expect the yield in this year to be the smallest
of the last 25 years. Its was approximately 25 percent less than last year’s
harvest but the Quality of the 2010 vintage is considered to be good. They also
added The 2010 vintage wines will be less full-bodied than those of previous
years.

There were many standouts at this very intimate affair with a
who’s who in attendance to be the first to sample the latest vintage from
Germany. If you were looking for scores there were plenty of them to be found.
From Karthauserhof Estate the 2009 Reisling Spatlese , Eltelsbacher
Karthauserhofberg with a 94 rating from Wine Spectator was a very nice treat
even though it was from the previous vintage. Looking at 2010 there were many
standouts in what promises to be a very nice vintage. 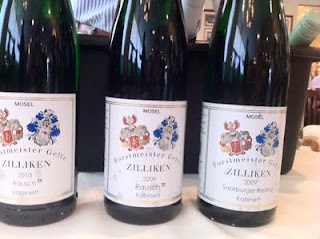 Schloss Lieser estates caught the attention
of many with their mouthwatering 2010 Reilsing Spatlese “Erste Lage” Lieser
Niederberg Helden . For those who enjoy their German wines on the dryer side,
Pfeffingen Estates did not disappoint with a very nice 2010 Scheurebe Dry,
Estate. Schloss Schonborn had a large selection of 2009 and 2010 Vintages. Their
2010 Riesing Dry, Estate was a nice easy drinking wine and showed why this
estate is well known. Schloss Schonborn also treated us with a large selection
of Library Wines. Their 1990 Riesling Spatlese Medium Dry was a fine example of
how Riesling handles ageing.

This was not just about Rieslings but
about showing off the versatility of German wines. Rose , Pinot Gris , Pinot
Blanc and Pinot Noir wines provided a nice showcase to add to the many Rieslings
young and old being sampled at this event.

Over all we found the 2010
Vintage white wines are characterized by the typical fresh fruitiness we would
expect but also crispness which is so highly esteemed world wide as well as
being less full bodied. After meeting the esteemed winemakers who few many miles
and sampling their latest work of artistry, we will look for the 2010 vintages
on wine lists and know we will not be disappointed .