German wine is primarily produced in the west of Germany, along the river Rhine and its tributaries, with the oldest plantations going back to the Roman era. Approximately 60 percent of the German wine production is situated in the federal state of Rhineland-Palatinate, where 6 of the 13 regions (Anbaugebiete) for quality wine are situated. Germany has about 102,000 hectares (252,000 acres or 1,020 square kilometers) of vineyard, which is around one tenth of the vineyard surface in Spain, France or Italy. The total wine production is usually around 9 million hectoliters annually, corresponding to 1.2 billion bottles, which places Germany as the eighth largest wine-producing country in the world. White wine accounts for almost two thirds of the total production. 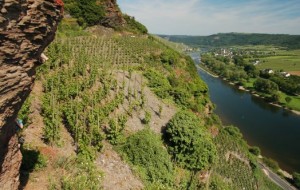 As a wine country, Germany has a mixed reputation internationally, with some consumers on the export markets associating Germany with the world’s most elegant and aromatically pure white wines while other see the country mainly as the source of cheap, mass-market semi-sweet wines such as Liebfraumilch. Among enthusiasts, Germany’s reputation is primarily based on wines made from the Riesling grape variety, which at its best is used for aromatic, fruity and elegant white wines that range from very crisp and dry to well-balanced, sweet and of enormous aromatic concentration.

While primarily a white wine country, red wine production surged in the 1990s and early 2000s, primarily fuelled by domestic demand, and the proportion of the German vineyards devoted to the cultivation of dark-skinned grape varieties has now stabilized at slightly more than a third of the total surface. For the red wines, Spätburgunder, the domestic name for Pinot Noir, is in the lead.