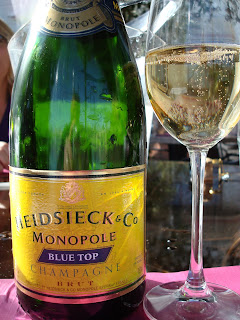 We are always looking for a great bottle of Champagne and we found one at a wine bar in Las Vegas. Who doesn’t love a Bottle of Bubbly, especially when it comes to special occasions.

Marche Bacchus. We were looking for something special and decided on the Heidesieck & Co Champagne Brut.

This Champagne is a Blend of 70 % Pinot Noir 20 % Chardonnay10 % Pinot Meunier. In the glass the appearance was
light yellow color, with green highlights. On the nose it appeared slightly woody and spicy. The palate was very fruit forward and well-structured.
The origins of Heidsieck & Co Monopole go back to the 18th century. Following in the footsteps of Florens-Louis Heidsieck, his nephew
Henri-Louis Walbaum and brother-in-law Auguste Heidsieck created one of the most sought after champagnes ever.

In 1933, Heidsieck & Co Monopole champagnes features at the Swedish court and at the table of Csar Nicolas II (the latter ordered over 400 000 bottles a year for his personal use).