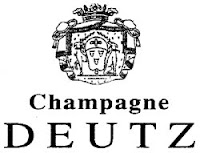 The Champagne Deutz  Symposium with Fabrice Rosset provide guests with a very special opportunity to  sample some of the world’s greatest Champagnes , one of which only 0.012% of the  population will ever have the opportunity to taste. This is what we feel is one  the many aspects the Central Coast Wine Classic has to offer.
r. 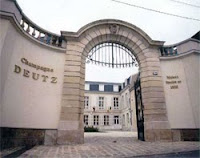 Nestled into the slops of the famous vineyards of Aÿ, France are the picturesque stone
buildings of Champagne Deutz, founded a century and a half ago by William Deutz
and Pierre-Hubert Geldermann.

Today, Deutz upholds the traditions of fine champagne-making handed down through five generations. Owning a significant portion of its own vineyards, Deutz selects only top quality grapes from 275 acres of vineyards in the finest crus of Champagne. The wines are slowly and carefully aged in Deutz’ chalk-walled cellars far beneath the historic village of Aÿ.

One of the oldest members of Champagne’s prestigious association
of Grands Marques houses, Champagne Deutz has been making distinctive champagnes  characterized by finesse, elegant vinosity and complexity since
1838. 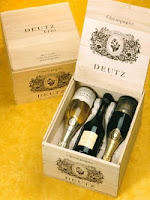 Fabrice  Rosset came all the way from France to take us through these incredible
Champagnes. More than 20 years ago, Fabrice Rosset joined the House of Louis
Roederer and worked alongside Jean-Claude Rouzaud (owner of the Company) as
Export Director, International Sales & Marketing Director and  Vice-President. Fabrice is now Chairman and CEO of Champage  Deutz. 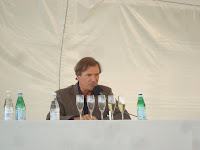 The history of Champagne Deutz is long and colorful to say the least. Champagne
Deutz was founded in 1838 as Deutz & Geldermann. The two immigrants from
Napoleonic Prussia — Geldermann, a Champagne salesman, and Deutz, a negociant —  opened an office with no vineyards. The cuvées were bought sur lattes, already  in the bottle, and were then disgorged, the dosage added and the wines
labeled

When René Deutz and Alfred Geldermann inherited the  business from their fathers in the late 1860s, sales of their Champagne had been  consistently rising for years. Alfred Geldermann later married René’s sister,  Marie Deutz, strengthening the bonds of partnership.

Deutz took its place  among the great Houses of Champagne when it became a founding member of the  Syndicat des Grandes Marques. 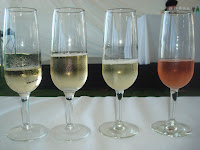 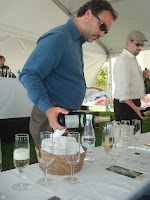 During the Great Depression, disaster was avoided when Marie Deutz reinvested a large part of her considerable personal wealth into the Company.

A new  commercial director was chosen to replace Charles Van Cassel. Georges Kaminski  soon had the House’s sales in order, and by 1934, a normal rhythm returned to  the financial affairs of Deutz: 132,530 bottles sold, two thirds on the French  market. This upward curve continued through the second World War.

In  1938, just before WW II, René Lallier died, leaving the company to his son Jean
Lallier. His first task was to get the winery through the war
years.

These were difficult times because there was no money to buy  grapes, no bottles, no horses to help work in the vineyards, and above all no  men to make the wine. But paradoxically, the Third Reich did nothing to stem the  flow of champagne production. In fact, the wineries of Champagne were forced to  collectively produce between 15 million and 18 million bottles in five years,  and obliged to supply the German Army with a set number of cases in proportion  to annual production.

Up to the 1950s, Deutz & Geldermann survived on  200,000 bottles a year. Before regular commerce could be revived, the  reconstitution of the champagne stocks had to be organized 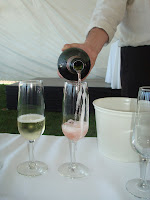 André Lallier instituted modern methods of management to meet the challenges of the
’80s and ’90s. While maintaining many of the wine making techniques taught him
by his father, André also asserted Champagne Deutz’ modernity and implemented
many technical upgrades in the winery – finer presses, a better tank room, and
an improved disgorgement process.

“The primary materials in the making of champagne have evolved so much,” he said. “The present-day grapes are healthier, better cared for, vinified in vats of stainless steel instead of wood, temperature controlled, and all oxidation is
avoided.”

In  1996, André retired. His son, Jean-Marc Lallier, remains as Export Director. The
new President of Champagne Deutz is Fabrice Rosset, a 20-year sales and
marketing veteran with Champagne Louis Roederer.

Today, the past and  present live contentedly together at Aÿ, merging tradition and technology to  create elegant champagnes in the timeless Deutz style.

After Fabrice told  us the amazing story of Detuz is was now time to “taste” the history and he was  with us every step of the way. 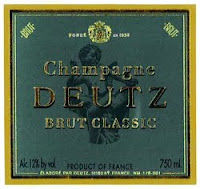 Brut Classic represents the distinctive Champagne Deutz style of elegance and finesse, which has made Deutz one of the most respected of all Champagne houses. The
non-vintage Champagne is matured according to traditional methods from a blend
of several vintages from twenty of the best crus until it reaches a perfect
balance of flavor.

The color of the wine is an intense gold with fine effervescence that signifies long maturation on the lees. On the nose, the wine initially displays notes of hawthorn and white flowers, which are followed by aromas of toast, marzipan and ripe pears. On the palate, the wine is full bodied and elegant with the freshness of a Chardonnay and
richness of a Pinot Noir. Overall, the wine is well rounded with a fruity
finish 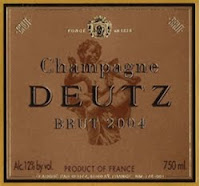 Deutz Brut Vintage is created in only the best years when a vintage is declared and only 11 vintages have been released since 1974. The wines are blended from the finest crus and age at least three years on the lees, one year more than required, in order to develop a rich bouquet and flavor.

The grapes are harvested in Aÿ, Marne Valley, Côtes des Blancs, and Montagne de Reims. Of these vineyards, 40 percent of the grape supply is from Deutz vineyards that are rated 97 percent out of 100 on the Champagne classification scale.

The harvest takes place over a 10-day period, generally between Sept 15-Oct 15 and are hand-harvested using the utmost scrutiny. The grapes are then carefully transported to the grape press to be pressed using automatic and traditional Coquard basket presses. One-hundred percent malolactic fermentation is used. The wine is fermented in 3,000-gallon tanks at 62 degrees Fahrenheit for two weeks. The wines are then left to age and hand riddled in traditional riddling racks. 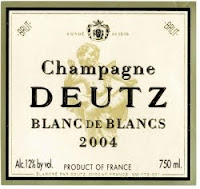 The grapes are harvested exclusively from Le Mesnil sur Oger (40%), Avize (50%) and Villers Marmer (10%). Forty percent of the grape supply is from Deutz’ own vineyards, which rate 98% on the Champagne scale. 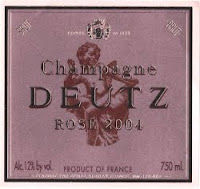 Made exclusively from Pinot Noir, 80% of these grapes come from the Montagne de Reims area, and the remaining 20% come from the Marne Valley. The specific style and color is obtained by the addition of 9% of red wine, whose Pinot Noir grapes come from two plots on the Aÿ hillside called “La Côte” and “Meurtet”, both that have
perfect exposure. After 4 years ageing in our cellars, its aromas have perfectly
blended, and the Brut Rosé has a very subtle nose and a palate that shows
remarkable power. A precise, full and ample flavor, complemented by the
richness of full-bodied, ripe fruit, emulating a high class Pinot Noir.
•  With a dense, tight texture, leaving in its wake lingering notes of great
elegance. 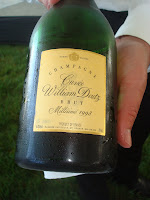 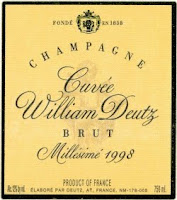 Created in honor of the founder of Champagne Deutz, Cuvée William Deutz is only made in years when nature bestows on the Champagne region an exceptional harvest (on average, 1 year in 3).

Cuvée William Deutz is only made available to the discerning few –
only 0.012% of the  population will ever have the opportunity to taste this superb champagne.  The cuvée is aged a minimum of 5 years in Deutz cellars buried 25 meters (82  feet) underground to ensure ideal conditions of humidity and
temperature. 55 % Pinot Noir, 35 % Chardonnay, 10 % Pinot Meunier

Powerful nose, rich and  complex, that shows aromas reminiscent of baked apples, together with light and  pleasant hints of preserved ginger and nutmeg, amongst others.

The entry is  crisp and the wine then develops considerable finesse, also revealing delicate  flavors of sultanas that evoke the charms of a sunny place. showing a full range  of secondary aromas that are usually found in Champagnes that have been aged for  a longer period.

Since 1838  Champagne Deutz has provided the world with one of the finest Champagnes .  Having Fabrice Rosset explain the history and take us on a tasting journey was  an opportuinty that will be in our memory for a very long time. The Central  Coast Wine Classic really went above and beyond to provide an opportunity like  this very special Symposium.