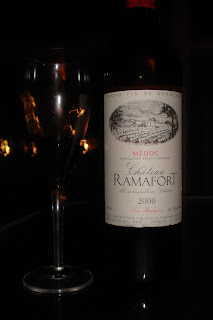 The Chateau Ramafort Medoc 2000 was a wine we found by accident. We were at Roys Fine Wines in Ft Pierce Florida
looking over their vast selection of wines when we saw this bottle on the shelf. This was the only bottle in stock and when we saw the vintage it was an easy decision to bring this one home for the price.
The Medoc is Bordeaux’s largest and best know wine region located on a slice of land northwest of Bordeaux . Its gravel plains, occupying the west bank of the brown, island-spotted estuary, rarely swell into anything resembling a hill. However, this poor soil is ideal for viticulture – vines root more deeply if they don’t find the sustenance they need in the topsoil and, firmly rooted, they are less subject to drought and flooding. The region’s eight appellations produce only red wines, from the grape varieties of Cabernet Sauvignon, Cabernet Franc,
Merlot and, to a lesser degree, Petit Verdot. Cabernet Sauvignon gives body, bouquet, colour and maturing potential to the wine, while Merlot gives it its “animal” quality, making it rounder and softer. The D2 wine road, heading off the N15 from Bordeaux, passes through Margaux, St-Julien, Pauillac and St-Estèphe.
In the glass the color was dark red and medium bodied. On the nose aromas of earth, musk and oak come through with some dark fruit at the end. After opening for over 30 mins the nose had much more dark fruit and the palate had hints of cassis and dark fruit with medium tannins on the finish. Further research of this wine showed it to be a blend 50% Cabernet Sauvignon and 50 % Merlot.This was a terrific bottle of wine and our only regret was it was the only bottle they had.
Scroll to top