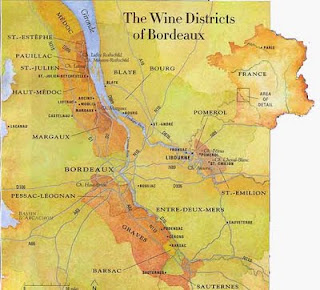 It has been known almost from the
beginning of recorded time that Food & Wine bring people together. In more
modern times when people get together they share ideas and educate each other on
their particular region or expertise. Many Food & Wine events offer guests
the opportunity to learn from world experts in their field. Pebble Beach Food
& Wine does this as good or better than any event we have attended.
Education is always important and a foundation of building blocks to a lifetime
of knowledge. 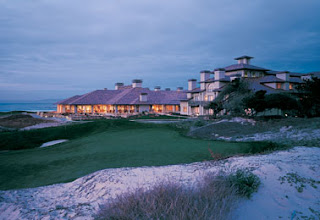 The very luxurious Spanish Bay
Inn at Pebble Beach was the site of an educational experience that we will take
with us for a lifetime. Pebble Beach Food & Wine offered us “The Bold &
Beautfil Bordeaux: A Historical Retrospective of Chateau Lagrange and Chateau D’
Issan. A vertical tasting of two famous classified growths in Bordeaux. We
joined the tasting panel of Anthony Gold Author, Emmanuel Cruse Chateau D’Issan
, Matthieu Bordes Chateau Lagrange , Robert Smith MS Bellagio Las Vegas and
Robin Kelly O’ Connor Head of Wine , Americas, Christie’s for an early morning
exploration of these prestigious Third Growths from Bourdeaux.

Before we get into the “meat” of the experience, it is best to
take a quick look at Bordeaux and the regions of Chateau Legrange and Chateau D’
Issan. Bordeaux has about 116,160 hectares (287,000 acres) of vineyards, 57
appellations, 10,000 wine-producing châteaux and 13,000 grape growers. With an
annual production of approximately 960 million bottles,[6] Bordeaux produces
large quantities of everyday wine as well as some of the most expensive wines in
the world. Included among the latter are the area’s five premier cru (first
growth) red wines (four from Médoc and one, Château Haut-Brion, from Graves),
established by the Bordeaux Wine Official Classification of 1855. A traditional
Bordeaux vinification is carried out in temperature-controlled stainless steel
vats. The total capacity of the vat room is around 10 000 hectolitres, with 63
vats each containing 66 to 220 hectolitres. Frequent tastings determine the
vatting time of between 15 and 25 days depending on the tannic development in
the fermenting wines. The temperature of fermentation never exceeds 28/30°C to
ensure preservation of the finesse and fruitiness. The pumping-overs are also of
moderate intensity and limited in frequency for the same reason. The selection
of press wine is performed “vat by vat ” , allowing a wider choice range during
the blend tastings. Bordeaux and its vinification methods are much more
complicated that we mentioned previously , but we wanted to get a little
background before we jump right in it.

Chateau Lagrange is located in
St-Julien. Situated on two plateaus between Pauillac and Margaux, the wine
region of St-Julien has the smallest wine production of the four major regions
in the Médoc. The region is divided into essentially two areas – the riverside
estates around the village of St.Julien and the southern estates around the
village of Beychevelle where the areas Cru Bourgeois are also grouped. The
waters of the Gironde estuary have a warming influence on the climate which,
coupled with the south-easterly exposure of most vineyards, helps to fully ripen
the Cabernet Sauvignon vines in this area.

Chateau D’ Issan is found in the Margaux
appellation that encompasses the village of Margaux and the neighboring villages
of Arsac, Labarde, Soussans and Cantenac. It is the most southerly of Médoc’s
appellations. The make almost entirely red wine, harvesting Cabernet Sauvignon,
Merlot, Cabernet Franc and Petit Verdot grapes, with only a small amount of
white wine made. This region has the thinnest soil in the region with the
highest proportion of gravel that allows the soil to drain very well. The wines
from this area are very susceptible to the overall quality of the vintage year
and the weather effects during the growing season and
harvest.

Chateau
Lagrange as been a Classified Growth since 1855.. The property is located in the
west of the Saint-Julien appellation right in the heart of the Médoc vineyards.
Château Lagrange was known in the Middle Ages as the Noble House of Lagrange
Montei. Records of the successive owners go back as far as 1631. In 1824 the
total production was 120 barrels (12 000 cases). In 1842, the ex-Home Secretary
to King Louis-Philippe, Count Duchatel, left his mark on the property and the
Médoc by introducing a drainage system in the vineyard. The Count brought the
annual production up to 300 barrels. This was a golden age for Lagrange, with
the famous 1855 classification awarding the property the title of Third
Classified Growth. 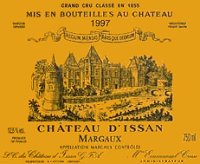 Chateau D’ Issan is s one of the oldest properties in
the Medoc. In the late 1400’s the property was called Teobon. It had a
succession of famous owners until the 17th century when it became the possession
of d’Essenault. He was a knight and a member of the parliament of Bordeaux.
D’Essenault had a new castle constructed and improved the property until the
French Revolution. At the time of the revolution, the estate was confiscated and
put under the the administration of Gustave Roy.

The property
continued to be improved through the period of the classification of 1855. At
that time it was given the rank of 3rd growth. Monsieur Roy’s heirs continued to
maintain and improve the property until they sold it just prior to World War I
in 1914. The estate suffered from neglect until 1945 when it was purchased by
Monsieur and Madame Emmanuel Cruse. The property was in extremely poor condition
in the vineyards and the buildings. There has been steady investment for 50
years and there is still work to be done to bring Chateau d’Issan to first rate
condition. One improvement of particular note was the renovation of the aging
cellars. This took place over a period from 1975 through 1988. The rest is
history that brought this Chateau into current time with wines that have gotten
the world’s attention for decades.

With the help of the prestigious panel
we began our journey through Bordeaux and these Classified Third growths.
Starting with the 2005 Vintage our palate pleasing journey began.

2005 Chateau Lagrange : Purple color in the glass . The nose is
feminine and elegant, with red berries and flowers. The Palate was was
concentrated with red flowers and berries with some smoke and a slight touch
oak. On the finish, balanced tannins and a long finish were
impressive..

2005 Chateau D’Issan . Many suggest that 1900 vintage may be
better. However, this 2005 Vintage was very nice. A very deep purple color in
the glass brought us to a nose of red flowers, licorice, currant, and smoke.
These lovely aromas were confirmed on the palate with nice concentration,
balanced acidity and a long finish. Still young, we cannot wait to try this 3-4
years and see its maturity 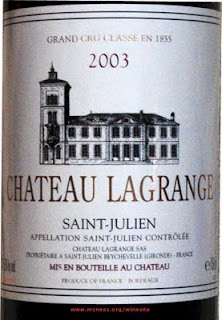 2003 Chateau Lagrange : The
2003 vintage was exceptionally warm. This 2003 is big, bold and not typical of a
elegant Bordeaux .

2003 Chateau D’Issan : Issan’s 2003 exhibits this
château’s classic, style along with big aromas of black currants, earth, spice
and oak. Medium bodied in the glass with a nice finish. Both winemakers agreed
that their 2003 Vintage would most likely not age more that 10 years. They also
noted that 2003 was the first year that Acidification was allowed in
Bordeaux.

2000
Chateau Lagrange : The 2000 vintage is one of those “Special “ Vintages that
even the winemaker stated “if you think this is good now watch and see what is
will be in 10 more years. This lovely Bordeaux was spicy , young and bursting
with deep flavors of plum.

2000 Chateau D’ Issan : Just like the Lagrange
2000 , this Issan was full of flavors of plum and black currant. Ripe fruit and
a long finish were signatures of this nice wine.

1995 Chateau D’
Issan : The 1995 vintage showed a deeper purple color in the glass. On the
palate more ripe fruit that then younger vintages. It also showed is the very
classic Château D’ Issan’s elegance and style. The 1995 Vintage can be drank now
but as they explained, it still has much more to say for itself as the years go
by. This was the first of the “older” vintages that really showed us the
importance of ageing these very fine wines.

1996 Chateau Lagrange : In
the glass the 1996 was dark red to purple . On the nose, ripe fruit was coming
through and very nicely balanced in acidity, fruit and tannins. A nice palate
with ripe red-fruit that was light and elegant. Much more fruit and complexity
provide a longer finish than the younger vintages.

1990 Chateau Lagrange
: In a word , this wine was Unbelievable. The blend of the 1990 is 44% each
Cabernet Sauvignon and Merlot, with 12% Petit Verdot added in to finish. This
historic wine was full of black and red fruits, rich and elegant with a finish
that never seemed to end. This was classic Bordeaux and one of those wines we
will remember for a lifetime.

1985 Chateau D’ Issan : The 1985 D’Issan
nose was a perfume of lovely aromas of expressive red fruit , red flowers and
currant . On the Palate elegant and soft flavors of red fruit, oak and smoke
slide into a nice smooth long feminine finish with soft tannins and long
lingering finish. Advice from all concerned on the panel, DRINK NOW !

Joining this distinguished panel tasting some of Bordeaux’s finest wines
with a tradition that goes back centuries was a true educational experience. It
just confirmed that one’s wine education is never over but a lifelong process of
travel, tasting and reading about the ever changing world of wine