Oh yes, wine country, you know, you’ve seen the pictures, Rolling hills,Vineyards, the picturesque winery on a hill in the distance, the smell of fresh air and dirt roads leading far into a vineyard that never ends.

When talking about wine country in the United States two words unusually come to mind, Napa and Sonoma, and rightfully so. These regions are the home of world class wines, renowned winemakers and lovely vineyards.However, it can be much more interesting to visit other places that offer world class wines. Turn down a road in Paso Robles or the Edna  Valley or many other wine regions in the country and it can be like a treasure hunt that promises great riches when you reach your destination. We decided to find new friends and see some old ones in the Central Coast of California.

On our journey we decided to stop into the Central Coast town of Paso Robles, famous for their Zinfandel but we know there has got to be much more than that, after all, our country is about diversity.We stopped in to see one of the long-time experts in Paso Robles, Michael Mooney winemaker owner at the famous and highly allocated Winery Château Margene. 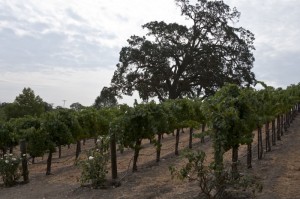 After driving through hairpin turns wishing we had a Ferrari just to add some additional excitement, we arrive at the winery and Michael is there waiting for us.

We joined Michael on a beautiful afternoon sitting on the patio overlooking the  Vineyard with some beautiful bottles of wine and lots of glasses! This is going to be fun.

As Michael began to pour the first wine, we wanted to learn more about how he got started in the business of providing great pleasure to thousands. After all, a major ingredient in wine-making is the story behind it and Chateau Margene is no exception.

Michael explained he caught the wine making bug and wanted to establish a vineyard, build a Winery and establish a home. He came from a high-tech background and  admitted he didn’t know anything about winemaking but Nevertheless, he took up  residence in the summer of 1998. Not wasting any time, he planted his 5.5 acre  estate in the fall of the same year. 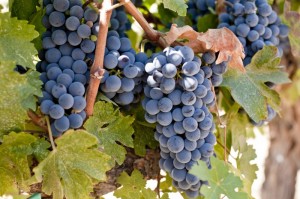 Michael got the ball rolling pretty fast. Château Margene’s first wine was a Cabernet produced in 1997 sourced from both the east and west side of Paso Robles. 2011 was a monumental year for this high-tech executive turned winemaker. They bottled the first estate wines a 2001 Cabernet Sauvignon and the 2001 reserve Cabernet Sauvignon.

Of course the first question people ask is why Paso Robles?   Michael explained that he drew from his high-tech background “it’s all about the heat index and consistency” he said. “Of course we first looked for land in Napa and Sonoma but we weren’t really happy with the consistency on the heat index we found.” He added. He headed south and then he found his promised land of what would become Chateau Margene. Paso Robles was a place to be with the heat index that was consistent is per perfect for Cabernet and that’s how the story began.

Being the Corporate guy he is, Michael and his wife Margene put together a 10 year plan.  Step one, hire the best venticulturalist we can find. Step 2, hire the best winemaker we can find and step 3 “We listen and we learn” he stated. And that they did, in 2000 Michael and Margene started making their own wine after listening and learning for three years.

The work certainly paid off in 2003. 312 Wines were entered in the international Cabernet shootout. 12 were selected as being “standouts “ One of those standouts was the 2000 Chateau Margene Cabernet Sauvignon which finished seventh and went on to tie for first place! Not bad for a high-tech Executive turned winemaker. 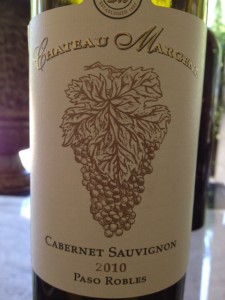 Enjoying an afternoon overlooking the rolling hills, we continued our  enlightening conversation as Michael poured our first treat. A tasty Chateau Margene 2010 somewhat young, this lovely blend 79% Cabernet 16% Cabernet Franc and 5% Merlot is exquisite. Blackcurrant and blueberries make you feel like you’re  walking through a blueberry patch in the forest. Speaking about forest, it also features Cedar notes as well. The Cabernet was sourced from five different vineyards. That’s what Chateau Margene is all about. The 2010 has a nice long finish with moderate tannins.

We got and education Michael Mooney style on oak barrels. He personally likes 30% new oak. He knows of course, many wine makers like 100% brand new oak but he is always “looking for the fruit to be a star” he said.

Recently, Michael and some of the other winemakers, 16 them to be exact formed the Cabernet collective because they feel that Paso Robles can make some of the best cabernets in the world. They have a scientific term called diurnal shift. This is term for a huge gap in daily temperatures. In Paso Robles for example, in some areas in August at 5 PM it could be 100F, at 6 AM it could be 50F. This is great for balanced acidity and for lovely Cabernets.

As we said earlier Paso Robles is very well known for making very good Zinfandels. We were schooled on the Paso Robles AVA from one who knows. There are 613,000 acres planted in the Paso Robles AVA. Michael went on to say of those 613,000 acres only 9% is Zinfandel. The next most popular for consumers are the Rhone varietals and they only account 14 to 17% of the total. The hugely overlooked and very good Bordeaux varietals account for a majority at 55% percent of the 613,000 acres planted. That fact alone just goes to show how much fun exploring a new area can be and those little interesting facts, you may find along those curvy dirt roads, are the true gems of an wine adventure. 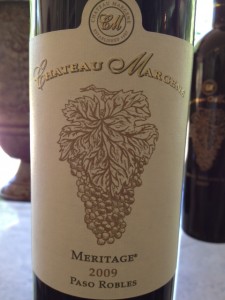 Chateau Margene 2009 Meritage was next in our glass of pure enjoyment. Meritage is always a personal favorite. This Bordeaux style blend is very typical of what should we would expect from the west side of Paso Robles. A sexy, elegant blend  of 40% Cabernet 40% Merlot and 20% Cabernet Franc makes this wine perfect any time of year, with food or by itself, you can’t go wrong. Michael himself enjoys the Meritage because “This is what Paso Robles is all about” he said swirling his glass with a smile.

And then we come to a great story. All wines have a great story and we already  know Margene and Michael’s story, but now a story within the story. It is a  story about a Bandito, Mexican land grants, Derringers, gangs, and revenge.

In 2011 El Pistolero”, an entry level program was introduced to offer premium  wine at an exceptional value. But, now we going to hear the rest of the story.  Michael’s family goes back seven generations in California.  Ignacio Linares was a soldier on the Juan Bautista de Anza Expedition into California in 1775.  Ignacio’s grandson, Victor Linares was granted a Mexican Land Grant in San Luis  Obispo County, by then Governor Juan B. Alvarado, for Rancho Canada de Los Osos in 1842. Michael explained that Victor Linares is his great, great, great uncle. 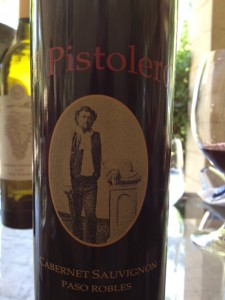 The United States, under US law took the land grants from him. This mild-mannered uncle became a famous Bandido , joined the Jack Powers gang and fought for revenge until Victor himself died in a shoot out at the family ranch in Los Osos . That is the rest of the story, as they say. And you can read it for yourself on the back of the label of the bottle.  You can assuredly taste the history of seven generations behind this wine. Another lesson learned; tak time to read the story it is probably an interesting one.

With afternoon fading away, the sun getting lower behind the hills we still had Chateau Margene’s flag ship wine to savor. It was a slow build to a crescendo, with previous wines and the great stories of hard work and a proud family history.  It was time for 2007 Beau Melange. This was a very special treat as it’s sold out and second of all it’s pretty pricey. This lovely wine is sourced 100% from the Eastside estate and it only produces  1.3 tons per acre. This is Michael’s  baby. He takes care of each vine and treats it just like his own flesh. And if you think about it is. 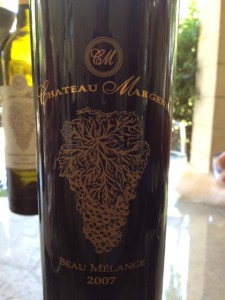 We had this bottle opened for a while. We really wanted to see what this  2007  vintage would be like  when fully and naturally exposed to air for the first time in 6 years. This flagship, beautiful Cabernet is aged 32 months in French oak 50% new oak. On the nose, blackcurrant, smoke, dark fruit and leather jump out. On the palate it is an explosion of deep fruit, spice, balanced tannins and a long lingering finish. This true trophy wine is a perfect marriage of 45% Cabernet Sauvignon, 33% Cabernet Franc and 22% Merlot and a pleasure by itself or with food.

Drink now if you can find one or cellar it to 2020 and it will age nicely. In short, spending the afternoon on the back porch with Michael was an educational and enjoyable experience. We heard inspiring stories and learned technical facts about the appellation. The next time you’re in Paso Robles don’t just think about Zinfandels, enjoy some of Bordeaux varietals and seek out a tasty Cabernet from Chateau Margene,Eberle or Adelaida. They all have amazing wines.

We raise our glass of Chateau Margene 2007 Beau Melange and say thank you to Michael for spending time with us.  We head out once down the wine trail of life through Paso Robles and continue north for a whole new adventure.