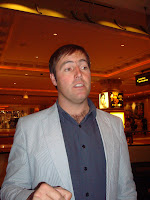 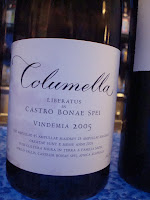 We have met many winemakers in our travels. Perhaps the most interesting winemaker we have met in a long while is South African Eben Sadie. Eben visited Las Vegas and held a trade tasting at the Aquanox Resturant in the Venetian Hotel and Casino.

Vino Las Vegas attended the event were intrigued by this young talented winemaker. Eben has many of his vineyards located in the Swartland region on Paardeberg Mountain in South Africa. 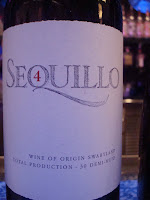 We started off the tasting with the Sadie Family Palladius. This blend of Chenin Blanc , Viognier , Grenache Blanc and Chardonnay was refreshing and had a long elegant finish. This is wine is highly allocated with only 150 case’s made. The price range is about $500 We followed the palladius with the Sequillo White with the same blend but adding Roussane to replace the Chardonnay. Sequillo is also used as a Syrah, Mourvedre Grenache blend and a 100% Pinot Noir. These three wines were complex and can be found in the $300-$400 range. The Sequillo Pinot Noir only has a production of 1800 bottles. The most interesting fact about the Sequillo vineyards is they are Mule plowed and Bio Dynamic and grow in granite and gravely soil. 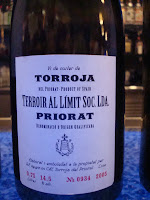 Eben then poured his 95 point Columella 2005 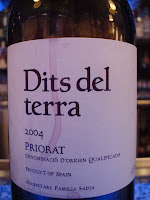 which is the highest rated South African wine to date by Wine Spectator. This wonderful blend of Syrah ( 80% ) and Mourvedre ( 20% ) is very elegant and memorable. The fruit is grown in granite, slate , clay and gravely soil. Every grape ishand sorted and pressed in an old basket press then aged 18 months in traditional Bordeaux barrels. The spice and tannis on this wine carry through from nose to finish can be hard to find as only 8000 bottles at a price range around $700 were produced. 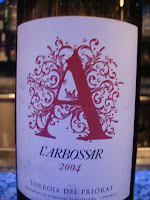 Eben also has vineyards in the Priorat region of Spain. His entry level
Spanish wine is the Terroir Al Limit 2005. This lovely wine from 55 year old Priorat vines was a real treat. Lots of red fruit , spice and big tannis gives this wine great structure and acidity. Only 2600 bottles at price range about $ 650 were produced

It only got better when we tasted the Dits del Terra 2005 Priorat. These vines are 90-100 years old and produce very concentrated fruit. This concentration really comes through on the palate with alot of big red fruit. 2700 bottles were produced in the $1000 price range for this wine.

Our last wine of the day was the Arbossar 2004 Priorat. This Priorat was very fresh and high in acid. The 2004 vintage has been reguarded as a great one because the grapes ripened at the right time. As Eben stated ” Priorat has been grown in this area for 4000 years, why plant anything else ! “.

Eben is a very talented winemaker and we were impressed with his wine making philosophy. He went organic in the vineyards in 1998 and by 2003 he was totally bio dynamic. He believes that the wine should be left alone. No irrigation or yeast added. He even went on to say that barrels speed up ageing and if you look back over 100’s of years. Barrels were only used for transportation of the wine. Eben believes that “barrels over power the wines” and wine should “taste like the land ” from where they are from. Eben wants to explore new varietals mainly because the world has focused on “five varietals” and everyone wants to taste the same. Wines should be” historic and cultural” but over recent years Eben believes wines have lost their “sense of place”and even has a goal to produce wine with no power or machinery by 2012.

After meeting Eben you cant help but be caught up in his enthusiasm for what he does. There is no doubt he will succeed in his plans.